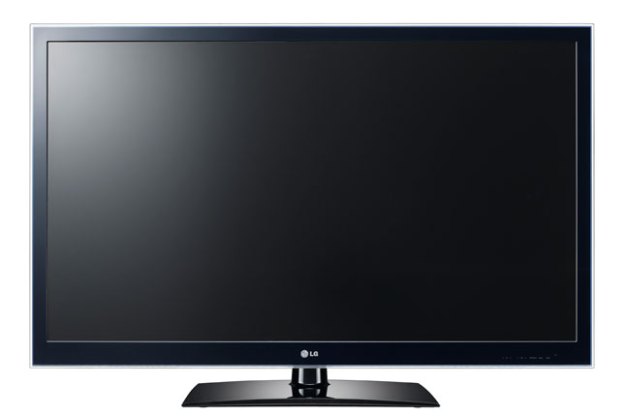 “The LG 47LW5600 is a great alternative for those who don’t want to drop a bundle on 3D HDTVs using active shutter glasses.”

LG LW5600 series information: This review is based on our hands-on experience with the 47-inch 47LW5600 TV. However, our observations also apply to the 55-inch 55LW5600. According to LG, the two sets have identical specifications (save dimensions and weight) and should offer similar performance.

A new generation of less-expensive 3D HDTVs has just hit the market. Are they worth the lowered price of admission?

On the surface, the 47-inch LG 47LW5600 is just one of a sea of black-edged flat panel HDTVs, but it does have a nice translucent edging. The screen is framed by a fairly wide black bezel, so it doesn’t have that “floating pane of glass” look of higher-priced sets; still the overall design is more than acceptable. Along the lower bezel is the 3D emitter, touch buttons for controls you’ll never use, as well as remote control and intelligent auto light sensors. There are down-firing stereo speakers at the bottom of the panel rated 10 watts apiece, but it lacks the subwoofer you can find in more expensive models. As always, any big-screen flat panel deserves a sound bar at the very least in our book. The LG HDTV measures 43.9 x 26.9 x 1.2 (W x H x D, in inches) and weighs 40.8 pounds (45.6 with the stand).

On the left side is a jack pack offering two USB inputs (one for the supplied wireless LAN adaptor) and four HDMI inputs. The rear has component, A/V, RS-232C, RGB-in, Ethernet and other connections — it should handle all your gear with few problems. We just wish there were an SD card slot to handle stills and videos.

You get the panel, swivel stand and the eight phillips screws to put them together. We were rather surprised at how lightweight the stand is, but as long as it meets safety standards, no harm, no foul. The set comes with four pair of 3D glasses — count ‘em, four — a wireless network adaptor and two remotes: a backlit candy-bar style and the Magic Motion Remote control with strap that looks like a game controller. You also get a 36-page printed owner’s manual as well as a CD-ROM with the full 114-page guide for this model and about 30 other LG sets. We know companies want to save money and trees, but this arrangement is way too confusing. There’s also another disc with Nero MediaHome 4 Essentials for connecting to a DLNA home server, as well as a screen cleaning cloth. For some reason, LG includes composite and component gender cables when even a one-meter HDMI would be more welcome.

Once assembled, we connected a rather slow LG BD670 3D BD player ($249) and a Verizon FiOS cable box to the HDTV, then began watching Avatar and Alice in 3D for what seemed like the 10,000th time.

The tech world loves a controversy and one of the biggest coming out of January’s Consumer Electronics Show — besides which tablet would be number two to the iPad — was the battle between active and passive 3D HDTV technology. LG, Vizio and Toshiba jumped into the passive camp, while almost all the majors stuck with the active shutter glasses system (Panasonic, Sharp, Sony — even LG, Vizio and Toshiba!). Blowing away the competing claims over this “controversy” is pretty straightforward. The active-shutter system, also referred to as Full HD 3D, has higher quality, costs more and requires expensive, heavy glasses ($50 a pair and up). On the other hand, the passive system uses very cheap and lightweight eyewear just like the pairs handed out at the local Cineplex. The HDTV itself also costs less, but finely-detailed 3D resolution isn’t quite as good. The technology is called Film Patterned Retarder, or FPR. (For the record LG supplies most of the panels to Vizio and Toshiba for these lower-cost 3D HDTVs. LG calls it Cinema 3D and Vizio dubs the technology Theater 3D.) Think of it as a contest between a Honda Accord and an Acura TL. The Accord is a solid vehicle but the higher-priced TL is much more tricked out—and you can certainly brag about your new Acura versus the Honda.

We were rather bemused by the Sturm und Drang emanating from the rival camps, as some believed poor consumers would be confused by the technologies. Perhaps. You can read all the white papers you want about FPR technology, but basically passive lets you watch 3D at home for a bargain price. If you want better overall quality, spend more for a set featuring Full HD 3D active-shutter technology. Like our Honda and Acura comparison, you’ll get a lot more if you shell out $1,600 for a 46-inch Sharp Quattron LC-46LE835U than a $1,300 47-inch LG 47LW5600 (recent prices at legit online dealers). That’s a base savings of $300 — not counting the cost of the glasses. The LG comes with four pair while the Sharp has none, so add close to $600 to the final cost if you want a real-world comparison. This is serious cash and a huge difference, just like our Honda and Acura.

The LG 47LW5600 is a 1080p 120Hz HDTV featuring LED Plus with local dimming, the company’s term for edge-lit LED backlighting with 12 addressable segments for the 47-inch edition. We’ve liked the results of this technology versus traditional CCFL LCD TVs as it’s narrowed the quality gap with plasma displays, which still remain our benchmark. Black levels, contrast and color rendition are much improved with LED technology. The panels are a lot lighter and thinner, while energy savings are pretty stellar too, and this model is no exception.

Before delving into the specific pluses and minuses of the 47LW5600, we had to set up the picture and sound parameters, access the Internet via the supplied wireless adapter, and use both remotes. Although the main remote is “dumb” i.e. it’s only for the television, the buttons are laid out simply and backlit — which is nice to see. The onscreen menu system is decent, but a recently reviewed Sharp Quattron has a more intuitive and colorful one. The LG goes beyond the ordinary with its picture tweaks. Although it doesn’t have THX certification, the set has two ISFccc settings so you can use the Picture Wizard II to calibrate your set. We used the standard and cinema modes as well, while the Intelligent Sensor setting adjusts parameters for ambient room light. You can go as crazy as you’d like. The 47LW5600 comes with a Magic Motion controller that acts as an almost-buttonless remote for navigating through menus. Once synched, a cross appears on screen when you aim it at the set; this acts like a computer cursor. Not being avid gamers, this really had no appeal, but it’s probably a nice trick for those comfortable with Move and Wii controllers.

CES tends to be a freak show with sensory overload galore. So it was good reviewing a production model in the comfort of our test area rather than watching prototypes in LG’s Las Vegas booth being jostled by retailers looking to score good deals. We have to admit being initially skeptical regarding the technology, but as always we withhold judgment until the real deal comes along.

Settling in about 6.5 feet from the screen, we watched LG’s Cinema 3D using scenes from Avatar and Alice. What’s very nice about the supplied glasses is the fact you don’t have to turn them on, worrying if they’re functioning properly or have enough power for a long viewing session. Also, the surrounding room doesn’t completely dim which occurs when active shutter technology kicks in. This “darkness” is not a big deal, just different. What is great is the fact the flicker-free LG glasses are very lightweight, comfortable and there are no issues about recharging the shades or swapping batteries. And did we say they’re cheap? In fact, you can even use Real3D glasses you’ve forgotten to return to the movie theater.

Our skepticism about the technology vanished as soon as Avatar’s opening credits appeared and the pop-up menu engaged — it looked really good. Checking out the tough scenes such as the spots appearing before Sully’s eyes at the very beginning of the film and the classic attack on the home tree, we have to admit being impressed especially when the gas canisters came popping off the screen. The 3D effects of Alice were also quite good and Chessie remains a favorite even after repeated viewings. But don’t think you can walk everywhere with the lighter glasses while watching 3D; the effects get lost as you move off to the side. Watching at eye level and near the center sweet spot is still the place to be. Were the effects and overall picture quality as good as a Full HD 3D Panasonic plasma or a new Sharp Quattron LE835U? No, but for the price differential this is a no-brainer, especially if you’re closely watching your budget.

You’ve read our laments about the dearth of 3D content and the 47LW5600 has a 2D-to-3D conversion option. As with other implementations of this, three-dimensional effects are minimal, but it does add some depth to shows like ESPN HD and other new, “live” video programs compared to the impact on older films. At least it’s something as we wait for more from Hollywood to fill the void…

Earlier we made a Honda-Acura comparison between passive and active technology. Yet the differences go beyond 3D. Overall picture quality is simply not at the same level as a Quattron with its vivid yellows and golds; the Sharp has deeper black levels and better contrast as well. And although the 47LW5600 has 120Hz TruMotion circuitry to help eliminate blur, the Sharp uses 240Hz AquoMotion, which did a better job with sports such as the ESPN’s NBA and NHL playoff highlights. We also prefer built-in Wi-Fi, rather than LG’s USB dongle which hung rather loosely on our review sample. Connecting to our router was simple using the main remote to enter the security code. LG calls its online offerings Smart TV, but you’ll call them the usual suspects: Vudu, CinemaNow, Netflix, Napster, NBA Game Time, Amazon VOD, Facebook, Twitter and so on. LG also has a selection of its own apps, but they look like Korean games trying to make the journey across the Pacific. Downloading movies is all well and good, but we’ll take the iPad for everyday surfing while viewing anytime, thank you very much.

We also watched some 2D Blu-ray discs such as Watchmen, The Dark Knight and Ironman to see how the LG handled those films. The results were very good, but the new Quattron was better, as are most 1080p plasmas. Even so, you’ll be happy watching 2D on this HDTV — especially for the price.

Consider us convinced. LG’s new Cinema 3D is a great alternative for those who don’t want to drop a bundle on Full HD 3D HDTVs using active shutter glasses. Realize there are some definite quality tradeoffs for 2D and 3D if you go this route. And your eyes should make the final decision as well as your credit limit. That on the table, we’re all in favor of anything that makes an improved entertainment experience more accessible and affordable. That’s why we had no problems when MP3s usurped the CD and why we’re giving the LG 47LW5600 an Editor’s Choice designation.