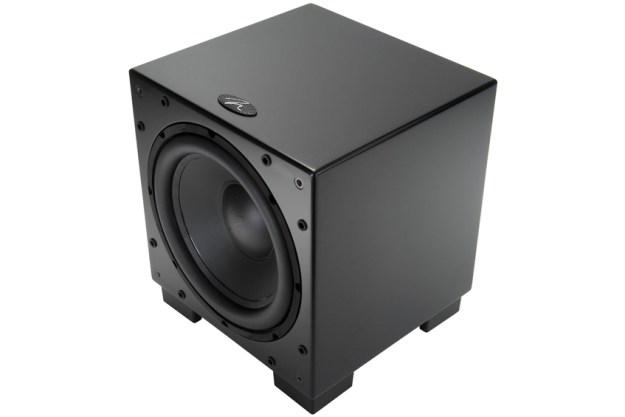 “This is one of those few subwoofers that can nimbly navigate the divide between the nuanced music performance and explosive movie tracks and successfully meet the demands for both.”

What’s in a name? In the case of the MartinLogan Dynamo 1000w subwoofer, there’s quite a bit: MartinLogan is best known in audio circles as a manufacturer of high-performance electrostatic speakers, but in recent years its subwoofers have earned critical acclaim as well. In the case of this model, the number 1000 stands for both power – 1,000 watts peak — and price — $1,000 – while the “w” stands for wireless. Stack that all together and you have — based purely on a model name — what appears to be a rock-solid subwoofer solution.

For those just dipping a toe into the high-performance audio pool, $1,000 for a subwoofer may seem like a lot. True, it is a fair sum, but that price lines up pretty well with competition from perhaps more familiar names such as Klipsch, Paradigm, Velodyne and Definitive Technology. Interestingly, though, the Dynamo 1000w has a shorter list of features than similarly priced models from competitors: no passive radiators, customizable EQ, or remote control included here. No, MartinLogan seems to have decided to keep it simple. And that is just fine, so long as the sub can offer performance commensurate with its price point.

For us, in order for a $1K subwoofer to earn its keep, it must do more than shake our home’s foundation, set off car alarms across the street or generally aggravate neighboring residents (though it must certainly do those things). It must also sound musical. Bass notes must have tone and definition. And the sub should be so quick it can start and stop on a dime. Does the Dynamo 1000w deliver? Read on to find out.

At 34 lbs, the 14.54 x 13.69 x 14.59 (H x W x D-in inches) Dynamo 1000w is appropriately hefty without threatening to break your back as you set it up (the SVS SB13-Ultra has that dubious distinction) . As we pulled it from its well-padded box, we admired MartinLogan’s choice to go with a satin-black finish as opposed to the glossy variety. The look is a bit stealthier and maintains an air of style that we think most folks will appreciate – well, those that appreciate big black boxes of throbbing bass, anyway.

In the box we found a wireless transmitter, a power cable, some floor spikes, a speaker grill and a pair of right-angle RCA plugs. The latter of those two accessories are for use if the sub is re-oriented to a front-firing position, which we’ll dig into a bit more shortly.

The Dynamo 1000w packs a pretty serious looking 12-inch driver. MartinLogan describes it as a “high excursion, poly cone with extended throw drive assembly.” So… like we said: serious.

Driving that 12-inch speaker is a 500-watt RMS amplifier which, as previously mentioned, can reach a peak of 1000 watts for short bursts when called to do so.

The cabinet of this subwoofer is sealed, which means a few things. On the plus side, there’s no possibility of chuffing — AKA port noise — and, thus, there are fewer restrictions on placement. Also, in our experience, sealed subwoofers also tend to have a more even response from the top to the bottom of their operating range. The challenge with a sealed cabinet design, however, is that the driver has to work a little harder against the air trapped in the cabinet, and that requires more power from the amp. Good thing the Dynamo 1000w has plenty of it.

The back of the sub is pretty simple. You get two RCA inputs, a variable crossover knob, a volume knob, a three-position phase switch with settings for 0, 90 and 180 degrees, and a crossover bypass switch for purists who insist there be no crossover employed at all when their electronics are taking care of bass management.

Also on the rear of the sub is a little button for syncing a built-in wireless receiver with the wireless transmitter that is included in the package. Connect your A/V receiver or processor’s subwoofer output to the transmitter, press and hold the buttons on both the transmitter and sub for a few seconds and the two pair right up. Wireless operating range is reported to be around 30 to 40 feet. That means that you can place the sub just about anywhere there’s a power outlet nearby, though we would recommend you read up on the importance of subwoofer placement, since where the thing goes has everything to do with how it sounds in your room.

Finally, the Dynamo 1000w can be converted with minimum hassle from its default, down-firing orientation, to a forward-firing alternative. MartinLogan makes the transformation process hassle-free by equipping the sub with easily removable feet, which can be relocated to surround the amplifier-side of the sub. With the sub’s driver now facing forward, a grill can be attached to where the feet once were. To make cable and power connections possible between the amp and floor, the power cord has a right-angle plug and right-angle RCA adapters are provided for the sub’s inputs. This sort of flexibility eliminates one of the decision points for subwoofer consumers who have preferences for either down-firing or forward-firing subs.

Over the course of our review, we changed up our speaker arrangements and bass management settings to require more or less of the subwoofer as we desired. In one scenario we had the sub reproduce the LFE channel (low frequency effects — AKA the .1 channel) exclusively. We also crossed over our full-range tower speakers at 80Hz and, later, 100Hz to force the sub to handle everything below those points. But we started out by running the sub along with the LX16 bookshelf speakers with an 80Hz crossover point for music-listening purposes.

We also played around with the subwoofer’s orientation a bit. In the end, we settled on a forward-firing arrangement because it seemed to work best for our listening room. With that said, we found the sub worked nearly as well in down-firing mode.

The sub was broken in for 40 hours at a moderate volume before critical listening.

A subwoofer at this level needs to be highly musical – capable of handling bass frequencies well up to 80Hz, 100Hz and even 120Hz with good pitch definition — since it could end up being mated to small satellite speakers. For that reason, we started out with the LX16 bookshelf speakers and a 100Hz crossover point.

To put the Dynamo 1000w through its paces, we needed some music that had a lot of fluid motion up and down the low-frequency range, and preferably something that demanded the subwoofer make those transitions quickly and produce both high and low bass simultaneously. We chose Damian Erskine’s 2007 release, Trios because, aside from being a terrific record, it suited our requirements perfectly while its minimalist instrumentation made honing in on our target range that much easier.

Erskine’s rendition of saxophone luminary Wayne Shorter’s “Footprints” provided the ideal warm-up for the Dynamo 1000w. In this recording, drummer Reinhardt Melz opens the first bars of the tune with a clave rhythm accented by resonant kick drum punches. Here, the Dynamo 1000w let us know it was ready to get down to business as it provided the perfect amount of punch, with spot-on decay as the drum heads played off of each other. Seconds later, Erskine kicks in with his bass work, deftly moving about the groove in a weaving pattern that explores the depth and height of his instrument and, in the process, giving our subwoofer plenty to chew on.

The Dynamo 1000w’s performance was exemplary. It’s performance up in the 100Hz area was satisfyingly smooth and balanced, with the rest of its output and the blend it managed with the bookshelf speaker was so seamless, we had a hard time believing we were listening to satellites matched with a subwoofer. Tonally speaking, the sub was spot on, rendering every note with accurate pitch.

We then replaced the LX16 bookshelf speakers with the Verus Grand towers and bumped the crossover point in our Marantz receiver down to 60Hz. We ran the “Footprints” track again and, this time around, the tower speakers added a little meat in the lower midrange, which made Erskine’s bass sound more like a live performance than a recorded one. More importantly, though, the Dynamo 1000w once again seamlessly integrated itself into the new arrangement. Its ability to almost disappear as it helped to present a cohesive sonic picture was truly impressive.

We then switched musical gears and queued up some bass-intensive Dubstep tracks, including the uncharacteristically melodic “Woo Boost” by Rusko. During this selection, the subwoofer showed its ability to pounce on complex, bass-heavy material and then stop just as quickly as it started. We also marveled at how well it maintained pitch definition in the extreme low range while executing complex syncopated rhythms.

Given the Dynamo 1000w’s admirable extension during our Dubstep tests, we anticipated equally impressive results with explosive LFE movie tracks. We were not disappointed.

There is a sequence in the movie Red where the story’s main character, Frank (Bruce Willis) winds up cornered in his non-descript suburban house by an army of assassins armed with some formidable firepower. After Frank puts a beat-down on a group that has already infiltrated his sanctum, a militia advances on the home in lock-step as they simultaneously unload their automatic weapons at the house. The recording of the gunfire is loaded with LFE punch, which is quick and relentless. We’ve heard this segment countless times, but never with such poignant separation between percussive gunfire blasts. The Dynamo 1000w was simultaneously clean and potent, punching us in the chest with a battery of pulses making it feel as if we were getting shot ourselves.

Finally, we reached back a few years to the film U-571, and the well-known scene which involves a barrage of detonating depth charges surrounding a German U-boat. Here, the Dynamo 1000w once again flexed its muscle and delivered the explosions convincingly, with no obvious signs of strain. Mission: accomplished.

Though we had already had a good experience using the included wireless transmitter during a previous review, we went ahead and incorporated it into this round of testing. We returned to some of our music tracks, played them with the sub wired to our receiver, then again using wireless transmission. We noted no perceivable loss of fidelity or any latency.

Forced to tender a gripe, we would say that this subwoofer isn’t capable of the sort of gut-scrambling, ultra-deep bass that can be had from more expensive, often ported subwoofers. But, if the trade-off is higher musicality, we’ll take that any day.

The MartinLogan Dynamo 1000w is a top-notch performer in nearly every regard, but we were especially pleased with its musicality. This is one of those few subwoofers that can nimbly navigate the divide between the nuanced music performance and explosive movie tracks and successfully meet the demands for both. Additionally, its ability to maintain its integrity at both low and high output levels makes it a suitable option for those with small and large rooms alike.

While we have no reservations with lauding praise on the MartinLogan Dynamo 1000w, we can’t help but wish performance of its kind could be had for a little less cash. Until that day comes, however, we think it is worth saving up in order to integrate a sub of this sort into your system. It can take any system and transform it from good to great, or great to spectacular.