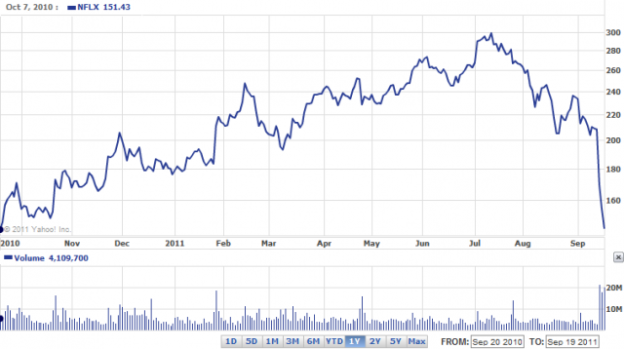 Netflix has released two big bombshell announcements in the last two months. First they informed users that there will be a price increase for the same exact service they were already receiving, and most recently they announced that Netflix will be splitting into two companies. Now that Netflix and Qwickster are official Wall Street was given a chance to react to the news, and it’s not pretty.

Seconds after Tuesday’s opening bell Netflix’ stock hit a 52 week low to just under $140 per share, with a valuation of $7.46 billion. To put the $140 value into perspective we don’t have to travel too far back in our time machine. On July 13 Netflix was at its all-time high price of just under $300, which was one day after they announced the price increase. In the two months that have followed the price and been cut in half, and who knows what tomorrow will bring.

With customers leaving, and looking for other options the future looks bleak for Netflix and Qwickster. Netflix most likely isn’t going anywhere anytime soon seeing as 75 percent of new customers opt for a streaming only plan and those users are unaffected by this most recent news.  Netflix even pointed out that Qwickster won’t be around forever, as DVD rentals will eventually decline over time.

Even if Netflix knew it would take some heat for its decisions in the last two months there is no way it could have expected stock prices to slip this much. As outlined in the company’s announcement this decision was made for the future of the company, but it still has many people asking what happens now.

The most common Netflix problems and how to fix them