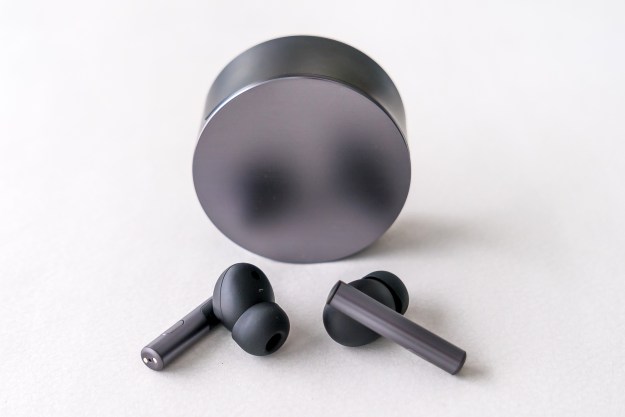 “A stylish alternative to the AirPods Pro at a fraction of the price.”

It’s not hard to find wireless earbuds that resemble the AirPods. Anything with stems will draw comparisons to Apple’s iconic earbuds, and Oddict is another brand taking a stab at doing it better. The Korean company thinks it has a worthy alternative, and at a cheaper price.

That’s where the Oddict Twig Pro come in, with a few surprises, but are any of those intriguing enough to stand out in a crowded field? Let’s take a listen and see.

Oddict’s first wireless earbuds model, the Oddict Twig, used an AirPods-esque, semi-open fit, but the Pro, as you might expect, follow the AirPods Pro, with an ear canal-sealing design. Inside the box, you’ll find the manual, a short USB-C-to-USB-A charging cable, and three pairs of eartips (small, medium, large).

The AirPods comparisons don’t end there, given the obvious stems sticking out, but the idea is to add more value both on the outside and under the hood. I like the case, which is puck-shaped, flipping open at the top to reveal the earbuds nestled inside. Grab them by the top of the stems and they come out fairly easily.

The buttons are easy to find and press and give a satisfying click when you use them.

A couple of things do stand out once they’re free and clear. First, is the physical button on each respective stem for the onboard controls. Press once to play/pause, double-click to skip a track, and triple-click to go back one. Hold for one second to cycle through active noise cancellation (ANC) and ambient mode. Hold for three seconds to bring up your phone’s voice assistant, like Siri or Google Assistant. The buttons are easy to find and press and give a satisfying click when you use them — a big improvement over the Twig’s touch controls.

The second is the sleek build where they don’t feel especially large or heavy, even though they’re made from aluminum. Even the fit should be pretty adaptable because of the size of the bud that sits in your concha (inner ear). While comfortable, they’re not sturdy enough to stay put when you start running or working out. The main reason why is because of how the stems protrude out away from the ears, creating distance that may loosen their grip once perspiration sets in. Not that they’re made for being super active anyway, courtesy of modest IPX4 water resistance.

Where the app comes in

Oddict does have an iOS and Android app for the Twig Pro, and it comes with several features — along with a couple of wrinkles. One, in particular, was forcing users to sign up for an account. Why would an account be necessary to simply control features on a pair of earbuds? Moreover, why even bother asking for said user’s birth date?

Sure, you can put in any date, as it doesn’t ultimately matter, but I did inquire with Oddict to understand why these things were in there. The gist is that certain countries, like South Korea, don’t do email marketing, so Oddict uses the account data for marketing purposes and to alert users about app updates. The birthday input is entirely optional.

It felt like callers were more “distant” than with other earbuds I’ve tried.

On the bright side, the app’s tools are useful. You have an EQ that splits into two parts. The first is a set of four presets (jazz, EDM, pop, and classic), while the second is a remarkably accessible version of a graphic equalizer: A moveable indicator that you can slide between four quadrants labeled warm, cold, hard, or soft. These abstract terms are essentially saying you can go with more bass (cold, hard) or more treble (warm, soft), or anywhere in between.

ANC comes with its own scale within the app through a slider to let you go high or low with the effect. Auto Play uses the onboard sensors to auto-play and pause when wearing or removing either of the Twig Pro buds. A Find Me feature helps you track them in case you misplaced or lost them, along with a high-pitched sonic ringing sound to help you audibly find them.

I focused a lot of attention on the app because it proves to be pivotal to how good the Twig Pro can be. The default sound, while okay, also came across as too subtle and restrained. I then played around with the EQ and the presets to gauge how much better it could get. As an example, setting the preset to Pop, and then moving the EQ over to Soft made pop, R&B, and smooth jazz tracks sound vibrant. Moving to Classic and a harder swing on the EQ made rock and acoustic guitar music resonate even more.

I noticed this with tracks like Amy Swift’s Views and its somewhat haunting melody, which was more evident when shifting to a softer sound. The Weeknd’s Out of Time was another of those tracks that sounded better with the same treatment. Alternatively, Aerosmith’s Walk This Way and Joe Satriani’s Sahara benefitted from a skew in the other direction.

Tweaking their sound in the app unearths the real sonic potential.

When you find something that works, save it as a preset, which will appear as an option within the preset menu. Tweaking their sound in the app unearths the real sonic potential here, which is better than I expected going in. Another key to this is the move to eartips, allowing you to better seal in the tunes you’re listening to. Grab some third-party foam tips that fit and you can get even better results.

I would be remiss to talk about the sound without going into Oddict’s codec support. You get SBC, AAC, and aptX Adaptive, covering both iOS and Android users for the best possible streams. The support extends to Snapdragon Sound, which is not a wholly separate codec, but rather one that takes aptX Lossless and combines it with Qualcomm’s Bluetooth High-Speed Link, letting you stream in CD-quality audio in 16-bit and 44.1kHz.  I didn’t have a phone with Snapdragon Sound, so couldn’t test that out, but if you do have devices that can take advantage of higher quality streams, the Twig Pro are ready to go.

I can’t necessarily say the same about phone calls, where results are more mixed. My issue was primarily with volume, where the Twig Pro always felt like callers were more “distant” than with other earbuds I’ve tried. For instance, when I switched to the Jabra Elite 4 Active within the same phone call, both I and the person I was talking to noticed an improvement. That’s not to say calls are terrible — they’re not — but they didn’t impress me, either.

The Twig Pro are also decent at canceling background noise when ANC is on, and again, the improved fit helps the cause with better passive isolation to at least seal out some of that noise. For my ears, the ANC performance is about as good as I would expect for earbuds in this price range. Pretty good, just not exceptional.

I would say the same about the Ambient mode, which is also quite good at piping in background noise to let you hear your surroundings or talk to someone without taking the earbuds off. It’s easy to switch between the two modes by way of the physical buttons, so that’s definitely a plus.

Oddict says the Twig Pro can play for 5.5 hours per charge with ANC on, and up to six hours with it off. Those numbers depend on volume level, which you’re almost certainly going to raise — at least a little — while wearing them. I got between 4.5-5 hours with ANC on, which is okay, but not great by today’s standards.

The case doesn’t get you a whole lot more, despite its very obvious size. You can expect one full charge, plus roughly half of another one for a full total of 2.5 charges and 13 hours. There is no fast charging option, and it takes 90 minutes to fully charge them from empty via USB-C. You get wireless charging, which is very convenient, though it is a slower charge that can take two hours to fill up completely. While the battery life is pretty much in line with what Oddict claims, the overall numbers aren’t quite where a lot of competitors currently stand.

Despite a stumble here or there, Oddict made a solid pair of earbuds with the Twig Pro, and at a reasonable price of $149. The brand has updated its past products with firmware updates, lending some credibility to the fact that they might get even better while you have them. If you’re looking for an AirPods Pro experience, only with more options and a better price, these are worth a look.

The price does pit the Twig Pro in a competitive space. The Jabra Elite 4 Active are not only fully waterproof, but also offer a great fit, good sound, excellent app support, and physical button controls for $120. The Samsung Galaxy Buds 2 offer a lot of the same things, albeit without a custom EQ, for $150.

Anker’s Soundcore Liberty Air 2 Pro also use a stem design, offer many of the same features, and come in at a lower price of $129. When you want something rugged and with a seriously deep custom EQ experience, the Jaybird Vista 2 are a good bet at $150.

You have to tread carefully with any pair of earbuds that come with an IPX4 rating. Yes, they are water-resistant, but really only just. It’s sweat that you have to worry about more, in case salt seeps inside. For that reason, wipe them down after a workout, and they should be fine. Oddict offers a standard one-year warranty to cover any functional issues, though not physical damage.

Yes. With their sleek and stylish aluminum construction, the Twig Pro look good and with judicious use of the Oddict companion app, you can extract some seriously good sound quality. With excellent (and future-proofed) codec support, plus handy features like wireless charging and wear sensors, they’re a great alternative to the AirPods Pro.  Just don’t get them if you want something to run or work out in, despite their IPX4 rating for water resistance.