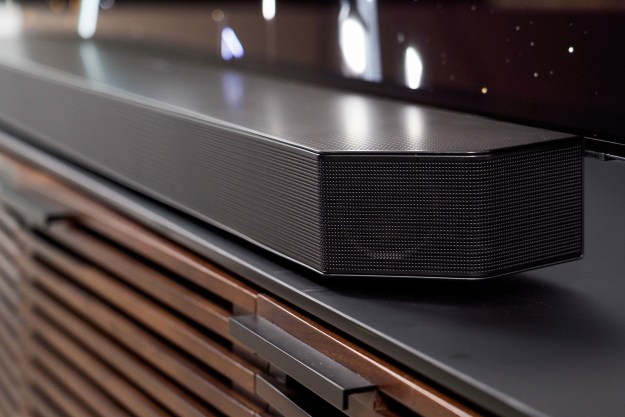 “As Dolby Atmos soundbar systems go, the Samsung HW-Q990B is the best there is.”

For the past several years, Samsung has consistently improved the sound quality of its soundbars while also testing price boundaries. Sure, there are more expensive soundbar systems out there — the Sennheiser Ambeo and Sonos Arc system come to mind — but considering Samsung is a mass-market brand, it might be challenging consumers with its latest flagship surround sound effort, the Q990B Dolby Atmos Wireless soundbar system, which currently sells for about $1,400.

Can any soundbar justify that kind of cost? Can any soundbar really deliver Dolby Atmos surround convincingly? What if I told you the answer is yes to both questions, and that the Q990B is proof?

In terms of appearance, the Q990B isn’t so much a pretty pony as it is a workhorse. The Samsung Q950A that predates this soundbar — as well as the Klipsch Cinema 1200 and a number of other soundbars — often feature speaker grill cloth on the exterior, which looks nice but can be a pain as I’ve noticed it is prone to bunching up or stretching out over time. The Q990B system features metallic grills, which lend a more industrial vibe that I am 100% OK with.

The soundbar itself is a bit of a beast – it’s not trying to win any massive-sound-from-a-tiny-box awards and, again, I’m 100% OK with that. The less you try to cheat physics with digital signal processing (DSP), the better. The trade-off, though, is that its height could be a problem for some who stand-mount their TVs. Even paired with Samsung’s own S95B OLED TV, the soundbar flirts with the bottom edge of the TV screen if placed on the TV’s pedestal. It doesn’t appear the soundbar was designed for this, though it didn’t stop any remote control signals from getting to the TV.  Still, if your TV uses an IR sensor for its remote, the Q990B’s height could be an issue for you. Then again, if you’re wall-mounting your TV and soundbar, none of that matters.

The surround speakers are also not tiny, but they aren’t bookshelf-speaker-sized either – in fact, I think they are sized just right.

One of the things I like about the Q990B is its cable management. On the soundbar, there is just enough space to fit up to three HDMI cables for the two available inputs and the eARC connection, and I love how cleanly the power cables on the surround speakers cleanly rout out of the bottom of the speakers.

The Q990B is about as plug-and-play as it gets.

What I do not love is the length of the power cords. The 3-foot long cords provided work OK for the subwoofer and soundbar, but I don’t think that length is helpful on the surround speakers. If you’re super lucky to have a power outlet near where the surround speakers should be placed, great, but I suspect most folks don’t. I can see the need for extension cables, especially if the priority is putting the surround speakers where they need to be to get the best sound.

The Q990B is about as plug-and-play as it gets. I plugged everything into power and connected an HDMI cable to the eARC port of a Samsung S95B OLED TV. Not only did the wireless surrounds and subwoofer automatically connect, but the Samsung TV detected the soundbar and engaged its Q-Symphony Sound feature, which uses the speakers built into the TV to enhance the overall soundstage. Q-Symphony Sound is available with most, if not all of Samsung’s newest QLED TV lineup.

You can also connect the soundbar to select Samsung TVs wirelessly – no HDMI cable needed – which is very convenient. And since the wireless signal is carried via a signal akin to Wi-Fi, that convenience comes with the bonus of offering better fidelity than other soundbars that do the same via Bluetooth. Still, for the best possible sound, I recommend the HDMI eARC connection, which also allows you to use the soundbar as a hub for two other HDMI devices.

Over the course of my testing, I haven’t experienced any wireless connection issues at all. There have been no dropouts of the surround speakers, which I have read on forums has been an issue for some people, and no dropout of the subwoofer signal either. I’ll try to stress test that later and update this review, but honestly, I’ve had my hands full testing a bunch of different performance aspects.

There are a lot of speaker drivers in this system, and Samsung lets you control every one of them with awesome granularity. The little display on the front right of the soundbar will let you know which channel you are adjusting, though I found it difficult to read. That’s just one reason I suggest getting the Samsung SmartThings app. The app makes adjusting channel and driver levels easier, but it is also the only way to customize tone or EQ controls, outside of some of the sound profile presets built into the bar. Those presets, by the way, don’t even need to be there, as I’m about to explain.

This system was designed for high-quality performance. In total, there are 22 drivers powered by 656 watts. There are four drivers in each surround speaker and an 8-inch driver in the sub. This should put 13 in the soundbar: I spotted two up-firing Atmos drivers, two drivers coming off each side for width, and three shooting straight into the room. Clearly, I’m missing some somewhere.

In each surround speaker, you get an up-firing Atmos driver, one pointing straight out and one on either side of the speaker in what looks and sounds like a dipole design. This means that not only is it providing some directional surround sound, but also some out-of-phase nondirectional surround. That’s a really cool design.

Before I start detailing how this system sounds, let’s address the question of whether this soundbar can really deliver Atmos surround effects. Now, if you aren’t familiar with Dolby Atmos, in a nutshell, it adds discrete height sound. This means that it aims to enhance the sound field by adding top-down sound for a dome-of-sound effect. In movie theaters, this is handled by a bunch of speakers mounted in the ceiling and firing down. At home, you can get Dolby Atmos in a similar way, by using in-ceiling speakers or down-firing conventional speakers, or you can use up-firing speakers that bounce sound off the ceiling, as the ones in this system do.

Now, the up-firing bouncy sound approach really does require that you have a flat ceiling that isn’t super elevated for the best effect. And, ideally, you don’t have acoustic tiles in a drop ceiling, since those are meant to try to absorb a little sound, not reflect it.

To test this system’s Atmos sound potency, I did a few things. First, I dropped the level of every driver in the system except the up-firing drivers to their lowest setting, and I maxed out the level of the up-firing drivers so they would be the loudest source of sound in the system. I also did a series of A/B tests wherein I compared the system with Atmos drivers juiced up versus the system with the levels of the Atmos drivers reduced — I even covered them up so they were basically out of play.

There are a number of scenes in Marvel’s Dr. Strange in The Multiverse of Madness that are excellent examples of Atmos mixing, and then of course there’s the opening sequence of Mad Max Fury Road, as well as a few moments in Gravity and Blade Runner 2049 that I like to use.

Folks, let me be absolutely clear: The Samsung Q990B’s Atmos effect prowess is The Truth. There is a scene in Multiverse of Madness where an organ plays a bridal processional in the church. Without the Atmos speakers, I got a great sense of space and reverb, but with the Atmos channels engaged, I could hear the ceiling of the church. The difference was stark. Over and over again, without Atmos versus with Atmos, the difference was almost palpable – like I could reach out and touch it. And I didn’t even have the best ceiling conditions for Atmos. I can’t wait to check this out at home, where I currently have the Klipsch Cinema 1200 set up.

The center channel clarity is possibly the best I’ve heard from any soundbar I’ve tested.

But honestly, the Atmos is just the icing on an already super-decadent cake. The Q990B sounds exquisite. It challenges the very concept of what a soundbar can do. How was the fidelity – the detail, the timbre, the accuracy, the presence, the soundstage, the continuity – once I dialed this system in for my setup and this room? It was nothing short of outstanding. The subwoofer is far more capable than I was prepared for, though a bit hefty out of the box, I needed to rein it back a bit, but not only does it have depth and weight, but it’s pretty agile, too. And musical, even. This whole system sounds really satisfying for music on top of movies. In fact, musically speaking, I prefer the Q990B to the Cinema 1200 for music, which I totally did not see coming.

Compared to the Sony HT-A9, the Q990B is just a bit more impressive. The HT-A9 pulls off some insanely cool psychoacoustics, but it really relies on a phantom center channel or a Sony TV to pull off pinpoint dialogue clarity and localization, and the Q990B is just better. In fact, the center channel clarity is possibly the best I’ve heard from any soundbar I’ve tested.

I could go on about the sound, but I’m running out of time and adjectives. I guess I’d sum up my experience as shockingly impressive, deeply immersive, tons of fun, and surprisingly satisfying.

So, you may not be shocked to hear that I think the Q990B earns every single cent of its asking price. No question. The Klipsch Cinema 1200 offers a comparable experience, but costs hundreds more. Same story with the Sony HT-A9, which is also very impressive and capable, but costs hundreds more. And when compared to the Vizio M-Series Elevate, there’s just no getting around the fact that the Q990B sounds bigger, has more authority, and can handle filling up much larger rooms.

Could you build something better-sounding for the same price? Well, yes, it is possible. Monoprice has a fairly impressive little 5.1.4 setup, though the subwoofer isn’t as potent as I’d like, so I’d upgrade that. Then I’d want to get a high-quality A/V receiver like the Onkyo NR6100 and some quality speaker cable and a subwoofer. There would also be some time spent on cable management. I suppose you’d get close? But … as I said at the start of this review, I think most folks these days are looking for truly great cinematic sound that isn’t a truly great pain in the behind, and also not outrageously expensive. For that, I’ve got to say, the Samsung Q990B is about the best there is.

Topics
This $12,000 soundbar features an actual Porsche 992 GT3 exhaust system
What is MPEG-H? The burgeoning 3D audio standard explained
A new Mercedes might be the best way to experience Apple Music’s spatial audio
The best soundbars 2022: which should you buy?
You can get an Apple TV for $59 for Cyber Monday if you’re quick
Cyber Monday: This Samsung 85-inch TV just got a massive price cut
65-inch Sony OLED TV is $700 off for Cyber Monday, and it’s selling fast
Perfect for a bedroom or kitchen, this 32-inch TV is $108 for Cyber Monday
Get these Sony wireless noise-canceling headphones for $68 today
Walmart has a Bluetooth speaker for $39 in its Cyber Monday deals
Amazon’s superb Echo Studio speaker is just $155 for Cyber Monday
Save $1,000 on this 85-inch Sony Bravia 4K TV for Cyber Monday
Cyber Monday Deal: Samsung’s Freestyle Portable Projector is $300 off