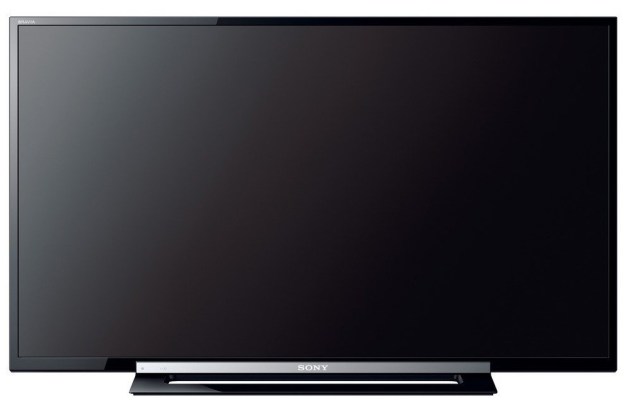 “While Sony’s R450A is an attractive, option packed TV, its poor off-axis performance and lack of control over intrusive features like MotionFlow have us looking elsewhere.”

As a premium television manufacturer, Sony has found itself in a vulnerable position in the ever-expanding TV market. While many of Sony’s top tier HD models peak above the $1000 range, its competitors have increasingly found ways to cut pricing while still providing a bevy of options and features. In this brave new LCD landscape, the gauntlet has been laid somewhere near the $500 price point by companies like Vizio, LG and Samsung, which all offer impressive 40-42 inch models in that segment.

To combat this assault on all sides, Sony has released its R model lineup, which includes several backlit LED TVs at entry-level pricing. Sitting right at that $500 sweet spot is the R450A 1080p 40 -inch TV (R45). While the R45 doesn’t offer Smart features or a native 120Hz refresh rate like some of its peers, it does bring a lot of that uniquely-Sony tech to the table that was once reserved for the company’s prime lineup.

Still, we wondered how well a Sony TV could compete in the budget market. After all, you don’t look to Cadillac for an economy car. (Remember the Catera?) After living with the R45 for about a week, here’s what we discovered.

The R45 is remarkably light for a 40-inch TV, weighing in at a mere 16.3 lbs. with stand attached. Pulling the large frame from the box with almost toy-like ease revealed a handsome, succinct design with a relatively slim-bezeled panel. The black gloss exterior is accompanied by a slim, mirrored bar at the front, sporting the Sony logo. The lion’s share of the TV is 2-inches deep, with the exception of a protrusion at the bottom of the back panel that brings the total depth to 3 inches.

Though the R45 ‘s design didn’t exactly blow us away, the TV’s sleek finish and mirrored front bar create a nice aesthetic once mounted. Though not exceptionally thin by today’s standards, the R45 does well for a backlit LED TV. Like many entry-level models, the R45 does not rotate on its stand. The thin plastic stand itself seems a bit flimsy, and the fact that it is attached to the TV by only two screws doesn’t exactly scream quality.

Scanning the R45’s exterior revealed a fairly rudimentary collection of ports. The back panel holds only 3 inputs including an HDMI, Component/Composite hybrid, and Coaxial cable input. Also at the back are two audio output jacks, including a digital optical and an analog RCA output. Those who plan to wall mount the R45 will find an easily accessible selection of inputs at its side bay, including a USB input for media, and a single HDMI input. We were pleased to find the latter also doubles as an MHL input for connecting a Smartphone or Roku Smartstick.

The R45’s remote is simple and offers no backlighting or programmability for controlling other devices. The TV does incorporate Sony’s Bravia Sync feature, which allows the remote to control select Sync devices, but it won’t do you any good if you buy outside the brand or own older components. The majority of the remote’s buttons are fairly intuitive, but the channel and volume buttons are located awkwardly at the bottom, requiring the user to move the device back and forth between those controls and the numeric keys up top. The R45’s settings are dispersed between two main menus requiring both a Home key, and an Options key to bring up the separate directories.

At the right side of the TV is a slim selection of onboard controls including a power button, a menu button, and channel control.

Our favorite aspect of the R45’s picture was its bright, accurate color production.

As for the R45’s techno-guts: The TV is loaded with a lot of bells, whistles, and other assorted digital toys once reserved for higher tier TVs. Some of these digital processing tools help give R45’s picture that signature Sony look. However, we think Sony’s guidance for these features (or lack thereof) can create a lot of confusion for the average user. And the majority of the options create too many tradeoffs in picture quality for any benefit they may provide. The “Live Color” mode, for instance, did make colors pop a bit more, but it also reduced shadowing significantly, masking large sections of images in our test media. We ended up disabling most of these so-called enhancements.

One especially notable feature is the TV’s use of Sony’s MotionFlow Technology; in this case MotionFlow XR 120. The “120” in the title is a not-so-subtle reference to a 120Hz refresh rate. There’s been a growing trend lately in which companies seem to fudge the numbers to mask true native refresh rate of their TVs, clouding the issue for consumers. While Sony doesn’t go that far (it still labels the R45 as a 60Hz TV on its website) it does leave the refresh rate conspicuously off the box, placing its MotionFlow XR 120 logo next to the 1080p resolution rate instead. (See what they did there?)

MotionFlow processing uses “tricks” like frame interpolation and image blur reduction to lower jittering, and in theory, make the 60Hz refresh rate seem more like 120 Hz. However, unlike most of the higher tier models, the R45 does not include the option to disable MotionFlow – an issue you can bet we dig deeper into in the performance section.

Getting started with the R45 was frustratingly over-complicated. After connecting an HD antenna, a Component Xbox connection, and our Blu-ray player via HDMI, we turned the TV on expecting to find the initial setup screen. Instead, we got only a blue screen indicating no inputs could be found. After negotiating through the settings, we found the Channel option, which allowed us to activate the TV’s auto programming so it could discover our over-the-air broadcast channels.

However, we still couldn’t get the TV to recognize our Xbox, finding the Component connection greyed-out under the inputs screen. After more investigation, we found a selection in the AV inputs menu with options for Component, Composite, or Auto for the R45’s hybrid input. The TV was initially set to Composite, explaining the issue. Why the option wasn’t defaulted to Auto is beyond us.

Once the TV was in working order, the picture looked pretty good right out of the box, needing only minor adjustments to the default Standard mode. As mentioned earlier, our first order of business was to turn off the majority of Sony’s image enhancement features. We were then able to get the set properly dialed in with only slight changes to Picture (contrast), Brightness, Color and Hue. We also changed the color temperature to “Warm”. A full list of our preferred settings can be found at the bottom of this review.

Our favorite aspect of the R45’s picture was its bright, accurate color production. Flesh tones were realistic in the majority of the mediums we tested, and, subjectively, the TV displayed brilliantly clear colors for its price point. Nature scenes in full 1080p were particularly gorgeous, rendered with sharp contrasts between blue skies, emerald waters, and crystal white peaks.

Contrast was also decent for the most part, especially in moderate lighting. When we tested the deepest blacks in a darkened room, we did notice some bright spots on the left edge of the screen. However, almost all LCD panels without local dimming (and even some with) will have these issues, and it wasn’t anything that would put us off from the R45.

Unfortunately, we did find a few troubling issues with the R45’s performance that gave us pause. One of our chief gripes is the set’s extremely poor off-axis performance. Perhaps more so than any TV we’ve tested at this level, the R45 exhibited an extremely narrow axis for optimal viewing. While the screen was quite pristine when viewed straight on, sitting even slightly to the side (or even just standing up) brought about a milky, opaque quality to the image that took a lot away from our viewing experience.

Our other main issue relates to the MotionFlow feature we touched on earlier. First, we have to say that throughout much of our testing, the R45 processed fast-paced images from sports broadcasts and streaming video quite well, faring better than the supposed 120Hz Vizio E420i A0 we recently reviewed. However, when it came to Blu-ray movies, there seemed to be just a hint of that weird, soap opera-effect associated with digital motion processing. Admittedly, we are particularly sensitive to the phenomenon, but we got slightly queasy watching characters move unnaturally with MotionFlow’s assistance. Though many viewers may not notice the effect, we wish Sony allowed the feature to be defeated

As for audio performance, the R45 performed as well or better than most TVs in its class – that is to say, sound was decent, but not great. Bass was weak, and the midrange was a bit tinny, but that’s to be expected with almost all flat panels. We appreciated included options like a 7-band equalizer, multiple EQ presets, and a sound booster (though we didn’t feel it boosted much besides velocity). We were also happy to discover Sony’s inclusion of the Alternate Audio feature, which allowed us to listen to our favorite HD stations on the local public radio channel, as well as providing language translations for channels that included them.

While Sony’s R450A is an attractive, option packed TV, its poor off-axis performance and lack of control over intrusive features like MotionFlow have us looking elsewhere. At the $500 price point, your money will go further with competing models from the likes of Samsung and LG. Still, there’s something beautiful about how Sony renders its HD content. If you really have to have that Sony glow, the R450A is an inexpensive way to get it; just make sure you’re sitting front and center.