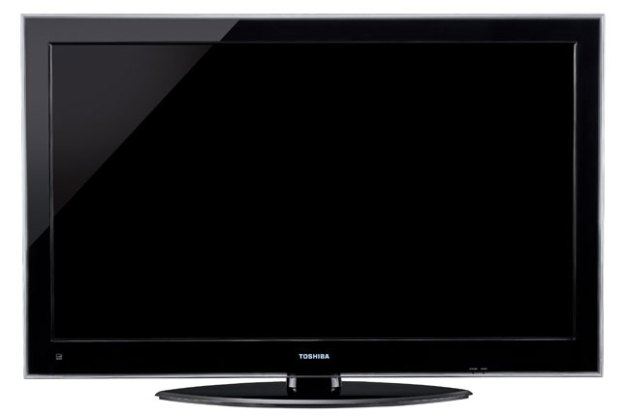 “The Toshiba 55UX600 is not a screaming buy, but it’s still a good television that easily connects to the web at the touch of your remote.”

While folks are chomping at the bit for 3D HDTVs—or so the industry would have you believe—Internet-connected sets are real and arriving at a rapid clip. Everyone has them including Samsung, Sony, Panasonic, LG, Sharp and now Toshiba. The net-connected UX600 lets you access YouTube videos, download VUDU movies, check out photos on Flickr, listen to Internet radio, access news streams and lots more. Competing models offer similar features. Along with dancing soldiers on YouTube you can also check out traditional HDTV programs and Blu-ray movies to round out your entertainment buffet. Let’s see if the 55UX600 satisfied our appetites…

The Toshiba 55UX600 is fairly straight ahead flat-panel display. No curvy lines like those found on LG sets or splashes of color from Samsung. Our unit was basic black. Toshiba calls it a Thin Air Lagoon design but we didn’t hear any Hawaiian music in the background after setting it up. Still it’s not unattractive–just don’t expect to be wowed. What will impress you is the slimness, which is a shade under 2 inches (1.96 to be exact). Other dimensions are 53 inches wide, 33 tall plus it tips the scales at 63 pounds with the stand.

The front is a clean and simple as can be. There’s an illuminated Toshiba logo on the lower bezel along with power on/off and self timer indicators. Off to the left is the remote sensor while the Auto Brightness Sensor is on the right. This last sensor adjusts backlighting levels to match the light in your room.

The right side panel has the controls you’ll never use (on/off, channel up/down and so on) since if you’re like us, the remote never leaves your hand. Below them are load of inputs including an SD card slot, USB 1, Ethernet, USB 2 (for the WLAN adaptor), two HDMI and a set of component ins. On the rear are additional ins and outs including two more HDMI ins, PC audio and PC video ins, digital audio and IR sensor outs along with antenna/cable in. This is a good selection although we wish the SD card reader handled other files such as AVCHD videos rather than basic JPEG photos.

What’s In The Carton

You get the television, 106-page Owner’s Manual, cleaning cloth, Allen wrench to connect the display to the supplied stand and a remote with two AAA batteries. What is a bit different is the supplied Dual Band WLAN Adaptor (802.11a/b/g/n) so you can tap into your router. Most other brands make you pay another $100 or so for the adaptor.

Definitely have a friend help you unpack the HDTV and assemble it—especially the 55-inch model. Once the 55UX600 was in position with sources connected, it was time to see how it performed.

Connecting Blu-ray and HD cable boxes via HDMI is about as easy as it gets. A wireless connection with the router is something else. We put the supplied WLAN adaptor into the dedicated USB port and had no troubles whatsoever linking to our router two floors above the set. Entering the WEP code with the remote was a bit tedious but hardly a problem. Speaking of the supplied remote, we’ll spare you our usual rant about the unsophisticated controllers packed with $2,000 televisions – buy a Logitech Harmony and be done with it.

Once you’re set up, just tap the Widgets key on the Toshiba remote and you’ll get a serious taste of Net TV with everything from 1080p VUDU movies, Facebook, Twitter, the NY Times and dozens more. It is, however, missing Netflix integration. This is not a huge deal since you can get Netflix on most Blu-ray players and game consoles. We were pleasantly surprised at the quality of streamed movies like Alice In Wonderland and definitely liked accessing our Pandora Radio account to hear some tunes. Given the dearth of first-run shows this summer, surfing these sites is a real plus.

The Internet is great but any laptop with a Wi-Fi connection gets you to these sites and more. The 55UX600 is first and foremost an HDTV, and a big one at that with a 55-inch screen and a $2,000 price tag. We settled in to watch a variety of programs via HDMI from our Verizon FiOS cable box and Panasonic Blu-ray player.

Like all quality HDTVs, the Toshiba offers many tweaking options—especially for video. They range from AutoView which adjusts quality depending on the ambient light and source material, Sports, Game, Movie, PC and Standard. You can make loads of adjustments for each depending on the setting. We kept it in AutoView most of the time but in Standard and Movie adjusted the color and contrast to our liking.

Audio adjustments are limited by comparison, but there’s a faux surround option that enhances the soundstage a bit, but is a mere shadow of a real 5.1-system. Like almost all flat-panel HDTVs, the UX600 has 20 watts of total audio power (10+10) for the two speakers which are located in the lower portion of the set. The down-firing speakers produce decent sound but you should really opt for at least a sound bar to add to the experience. On the plus side it has Audyssey EQ circuitry built-in to help the small speakers along by smoothing out some of the distortion inherent in speakers crammed into tiny spaces (i.e. the frames of HDTVs).

The 55UX600 uses an edge-lit LED backlighting system which has its pluses and minuses. It costs much less than full-array LED systems with local dimming as found in the Toshiba 46SV670, a TV with very deep blacks and great picture quality. Along with a lower price, edge-lit systems allow for very thin panels, about half the depth of the SV670. Admittedly a quality step-down from the company’s top-of-the-line Cinema Series, how did it stand on its own?

With the set in AutoView, we watched some FIFA game highlights–a great test for LCD blur–and the UX600’s 120Hz technology handled it well. Along with soccer and baseball we also watched a variety of other programming. Picture quality was decent but without the pop of the Cinema Series HDTVs or other full-array backlit sets. As DigitalTrends.com readers know, we still feel plasma has the best blacks and contrast; the UX600 is clearly lesser quality. After watching a variety of BD disks, we came away with same conclusion. Overall picture and sound quality were good but not at the same level of other HDTVs we’ve reviewed.

The Toshiba 55UX600 has a $2,499 MSRP but goes for around $2K at legit online sellers. Samsung’s Ethernet-only 55-inch Internet LED HDTV is around the same price, while a Panasonic a 54-inch Wi-Fi-ready G25 plasma is also around $2,000 including the optional WLAN accessory for your router. Given the similar pricing, the Toshiba is not a screaming buy, but it’s still a good television that easily connects to the web at the touch of your remote. After watching Net TV struggle along for years, we’re glad to see a gangly child up and running along like a FIFA all-star. We just wish this NET TV was a true world champion and included the likes of Netflix. If we could have our dream set, let Toshiba add Internet capability and widgets to a SV670 Cinema Series edition. It would definitely cost more but would be a dynamite package.