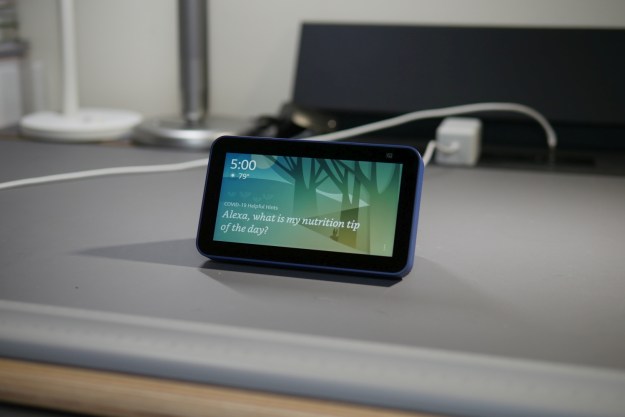 “With barely any substantial upgrades, don't be surprised if you can't find a reason to buy this Alexa smart display.”

It’s been a couple years since the release of the original Amazon Echo Show 5, so it’s very deserving of a refresh. After seeing the Echo Show 10 (3rd Gen) garner attention for some of its unique aspects, including how its display rotates to follow you during video calls, we all thought something big was brewing for the next iteration of the Echo Show 5.

However, that didn’t appear to be the case when Amazon announced it. On paper, it seemed like it was just another recycled successor — with the exception of a new 2-megapixel camera that replaced it’s predecessor’s 1-megapixel camera. Let’s find out if there’s more to it than just that one notable upgrade.

Even though I never owned the original, the specs sheet of the Echo Show 5 (2nd Gen 2021) indicates that we’re dealing with a very similar smart display design-wise. Its overall dimensions, weight, and aesthetics are no different, which technically still makes it the most compact smart display in Amazon’s portfolio. This means it’s better equipped for tighter spaces like bedside tables, nightstands, and even a cramped desk. I definitely appreciate its snug size, but it would’ve been nice to perhaps see it slimmed down a bit — either in terms of its overall size or perhaps the bezels around the display.

The only new thing here is the additional color option it’s available in, deep sea blue, which supplements the existing charcoal and glacier white options. It’s not as neutral as the other two colors, but it certainly can help to add some contrast. Honestly, I was hoping for much more than just a new color with the design, but I can’t neglect to mention how this is a common practice — just look at the Google Nest Hub (2nd Gen) as an example.

Display: Nothing fancy, but gets the job done

Even though it’s not a showstopper, the 5.5-inch 960 x 480 display finds success in not being an overwhelming distraction. That’s especially evident while it’s sitting on my desk, which is already dominated by a few other displays. It’s sharp enough to be able to make out the time and outside temperature, in addition to some of the news and notifications that pop up. I’m not overly convinced it’s the ideal picture frame replacement due to not only its size, but the fact that there’s noticeable distortion when you’re looking at it from a slight angle.

Smaller-sized smart displays don’t have the best reputation when it comes to audio performance, and the Amazon Echo Show 5 (2nd Gen 2021) doesn’t break new ground in this area. It’s powered by a 1.65-inch speaker driver that does OK for small, confined spaces. The audio performance is ample enough for background distraction as I’m working, but you really don’t want to go past the halfway mark on volume because it sounds shrill to the ear.

Interface: A little bit of delay

For some reason, there’s a performance delay when navigating around the interface. It’s very minor and doesn’t detract from the overall experience, but it’s tough to determine if it’s simply just a less than responsive touchscreen or a lack of oomph from the MediaTek MT 8163 processor that’s powering it. Regardless, I notice that actions while playing a song tend to exhibit some delay.

The camera doesn’t add anything substantial to the overall experience,

Thankfully, voice recognition doesn’t seem to be affected at all, which is evident in how the Echo Show 5 (2nd Gen 2021) is able to initiate voice actions in loud conditions.

Of course, the entire experience centers around the Amazon ecosystem. Functionally, it’s no different from other Alexa-powered smart displays, which all tie into services such as Prime Music, Prime Video, and many more.

Sure, the touchscreen makes it convenient to access different features, like being able to view a livestream of my security camera or turning on my Philips Hue lights, but I found myself relying on voice actions with Alexa much more.

Camera: A new camera that doesn’t add much

I mentioned at the top how this new model is sporting a slightly upgraded 2-megapixel camera. It’s the single meaningful upgrade on paper to an otherwise familiar model. Unfortunately, it doesn’t really add much to the overall experience. There’s a bit more detail, but the difference is negligible when looking at the live feed from my smartphone.

Needless to say, it gets the job done in terms of video phone calls or using the Drop In feature to check up on things while I’m out. It doesn’t get the same pan-and-zoom treatment that its sibling in the Echo Show 8 (2nd Gen 2021) received, so video phone calls are best experienced sitting right in front of or near the smart display. If you’re worried about snoopers, there’s a switch that covers the camera lens, but if you also want to mute Alexa, you’ll need to press the corresponding button.

Amazon’s decision to release a successor is puzzling to say the least. The only bonus I find in the Echo Show 5 (2nd Gen 2021) is that it’s slightly cheaper at $85 than the original $90 price tag of its predecessor. However, that’s still not enough because we’re effectively getting the same model as before with just a slightly upgraded camera. The camera doesn’t add anything substantial to the overall experience, making it very similar to its predecessor.

If you’re craving something with more substance, the Echo Show 8 (2nd Gen 2021) and Echo Show 10 (3rd Gen) are good options because they pack significant upgrades over their predecessors.

Constructed out of plastic, it feels rugged enough to hold up long term. In the event of a part going bad, there’s a one-year limited warranty that covers defects.

No, mainly because you can buy the previous model for $15 less than this one — while still having all the core features at your disposal.