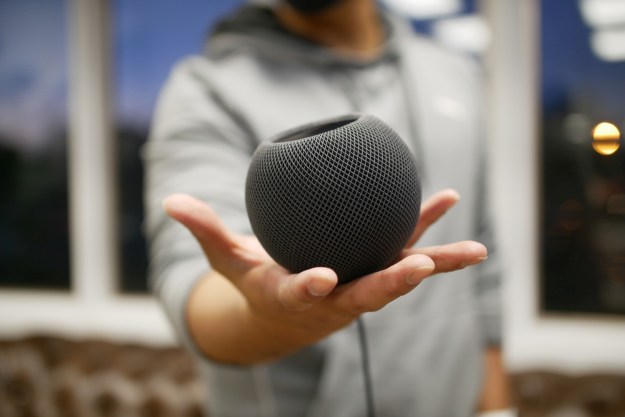 Apple rarely has any misses with its products, especially during the dominant era that began with the release of the first generation iPhone. Time after time, the Cupertino, California-based company has knocked it out of the ballpark, setting the bar in each product category it enters. Products such as the iPod, iPhone, iPad, and AirPods all have shown phenomenal appeal among consumers, but that doesn’t mean that Apple is infallible.

The original HomePod is an example of one of those missed opportunities, and its failure impeded Apple’s ambitious efforts in the smart home realm. Pricing was partly to blame — a premium cost of $349 out of the gates made it a tough sell for the masses. But it looks as though Apple has listened to its critics.

Now, though, there appears to be redemption with the HomePod mini. Even though Apple has gone smaller with this iteration, don’t let its size fool you, because this decision has grander implications that make it a formidable player in the smart home. And with recent news about its discontinuation, Apple’s future in the smart speaker space is placed on its pint sized offering.

There’s no denying that Apple has something special with the HomePod mini, but there are several more impressive smart speakers to consider if you’re in the market of buying one. If you happen to already own one, then you may be surprised by some of the neat stuff it could do.

Gone is the cylindrical, hulking design of the original HomePod, replaced by a more subtle appearance thanks to its spherical shape. It’s adorned with the same fabric mesh material as its predecessor — something I wasn’t too thrilled about because my cats thought of it as a scratching post. But thanks to its smaller size, it better fits into tighter, smaller spaces and away from the cats’ reach. Eventually, I decided to place it on my entertainment center in the living room, where it doesn’t overwhelm the rest of the stuff there.

The HomePod mini features a backlit touch-sensitive lid. Its animation of Siri listening and responding adds a slick look to it, but it still can’t pry my eyes from the Echo’s LED light ring. Around the back is its power cord that ends with a USB-C connection. Surprisingly, it doesn’t appear that the cord itself is removable. Since the original HomePod’s cord could be removed with a bit of tugging, I thought the same would apply here — but that doesn’t seem to be the case. On top of that, the length of the cord is fairly short, which means that it needs to be placed near an outlet.

Apple’s decision to go small is interesting. You would think its size makes it a rival to the Nest Mini and Echo Dot, but it’s actually meant to compete in the midrange class.

Computational audio at its finest

If you’re all about raw audio power, then the original HomePod is the logical choice for you. You should stop now if that’s your sole priority. That’s because the HomePod mini’s performance won’t come close to the original’s raw power. Where the HomePod mini truly comes alive is in how convincing computational audio is able to analyze and fine-tune whatever it’s playing.

From a specs point of view, the HomePod mini’s full-range driver and dual passive radiators won’t make audiophiles drool all that much. It’s actually the combination of Apple’s S5 chip and computational audio that delivers a tantalizing and convincing audio experience. The HomePod mini doesn’t disappoint for its size, producing ample mids and highs that don’t get drowned out by the lows. In fact, the focus on the mids and highs becomes even more apparent when the volume is cranked up — it never loses touch with them, nor does the bass ever sound strained.

If there’s one critique I have about the audio quality is that the HomePod mini’s in control of the audio tuning. There’s no way to customize or adjust for my particular preference. It’s not a deal-breaker, but I still would appreciate some level of control over things such as the treble and bass.

Back to my point about computational audio. It’s most evident when I paired the HomePod mini to my Apple TV 4K for watching videos. Unlike my soundbar, which seems to favor the sound effects and scores over dialogue, the computational audio appropriately tones down the score and sound effects whenever there’s dialogue — so I can actually comprehend what people are saying. This kind of intelligent adjustment is also useful when commercials play, given that my soundbar has a tendency to jack up the volume when they play. With the HomePod mini, however, the volume remains consistent. If this is what computational audio is all about, then I’m all-in.

Playing catch-up with the competition

First and foremost, the HomePod mini is the most affordable home hub for Apple HomeKit devices in the home. You need it in order for your HomeKit devices to communicate with your requests when you’re away, outside of your home’s network. Prior to this, the only other alternatives were the pricier Apple TV HD ($149), Apple TV 4K ($179), and HomePod ($299). You can also use an iPad, but I typically don’t recommend this because you want your home hub to remain stationary at the home — so the iPad is the least-qualified candidate in my opinion.

Siri still has a lot of catching up to do, which is reflective in how she lacks the accomplishments of her peers. Google Assistant continually astounds me for its intelligence, while Amazon Alexa’s can be swapped out for a celebrity voice like Samuel L. Jackson. Siri is neither as smart or as funny as the other two virtual assistants, but I really hope that she catches up. For example, it irked me that Siri didn’t want to announce my appointments for the day whenever I ask. After some troubleshooting and enabling the personal requests option in the Home app, it worked like a charm. Just remember to have that option enabled, or else Siri won’t announce it on the HomePod mini.

Despite this, there are other features I found useful. Take the intercom feature that allows me to play an audio message on all my connected HomePod speakers in my apartment. It’s great when you don’t want to shout from the kitchen to someone else in another room that dinner is ready. There are also the proximity controls, which allow me to hand off something I’m listening to on my iPhone to my HomePod mini — all by placing my iPhone above the touch-sensitive surface of the HomePod mini. Seamless features that allow different gadgets to talk with one another like this is what Apple’s known for, and proximity controls are proof of that.

There’s also the matter regarding app support. Currently, music listeners only have a handful of options to choose from when it comes to streaming from an iPhone to a HomePod mini. Apple Music and Pandora conveniently work like a charm, but many other third-party apps like YouTube Music are absent.

The HomePod mini is the speaker that Apple should have released first.

In the past year, we’ve seen more and more HomeKit-compatible smart home devices, ranging from smart locks to cameras. The lack of compatible devices undeniably mitigated consumer appeal for making Siri the virtual assistant of choice in the home, but things have gotten better. While Apple still trails Google and Amazon when it comes to total supported devices, there’s a higher degree of security and privacy to using HomeKit devices.

That’s the untold story you won’t hear too much about in the smart home wars. Apple doesn’t require its users to install a new app, or sign up for an account in order to use these smart home devices. All that’s needed is for you to set them up through the Home app and that’s it.

The HomePod mini is the speaker that Apple should have released first. The company would be in a far better situation in the smart home market if that were the case. Regardless of that, its $99 cost makes it an appealing offering that’s better positioned to bring Siri to the home. Sure, it’s not as smart or as powerful as some of the other smart speakers out there, but it doesn’t need to be because its computational audio, subtle design, and HomeKit home hub functionality make it a logical choice for many more Apple users this time around.

Much like all of Apple’s devices, the HomePod mini is solidly built. The mesh fabric should hold up if it’s left undisturbed, but the fabric-like material is prone to stains if something were to lightly spill on it.

Apple offers a one-year limited warranty that covers defects, but you can also purchase AppleCare+ for the HomePod mini, which will effectively extend the coverage for two years and cover two instances of accidental damage.

You bet. For the same cost, the Google Nest Audio has a commanding presence in the audio department. Audiophiles will appreciate its resounding and more powerful audio performance, while the Amazon Echo (4th Gen) carves out a middle ground between design, performance, and compatibility with other smart home devices.

Don’t just buy one, buy two because this year’s HomePod mini won’t drain your wallet. Plus, you’ll be amazed by what computational audio is capable of delivering if you’re a home theater buff.