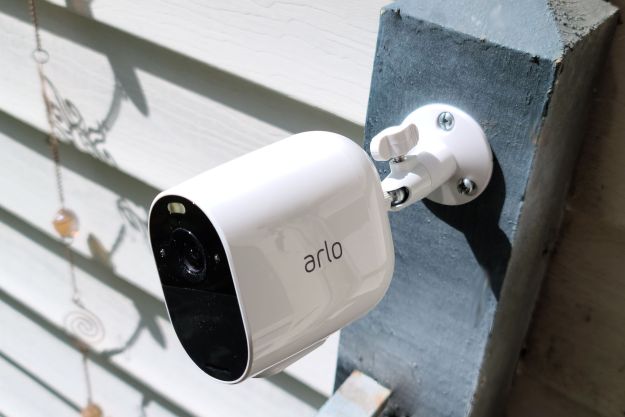 “Arlo's first camera without a hub is more affordable, but is it worth it?”

The Arlo Essential was created to be the answer to crappy security cameras that can’t “see” clearly in the dark. To achieve this, Arlo added a spotlight and color night vision to the Essential. Since nighttime is prime time when it comes to security filming, this was a bright idea that we’re surprised more outdoor video security cameras don’t focus on. It’s also the company’s first hub-free camera, which is especially handy for those who don’t have the extra Ethernet ports on their routers. Did Arlo’s hub-less, night vision focused camera come out a winner? Here’s what I found.

Since the Arlo Essential is a wireless camera, installation is quick and can be done even by the least mechanically gifted person. The app guides you through the setup step by step. You just attach the base to wherever you want to put the camera with three screws. Twist the camera onto the base and you’re done. It took no more than 10 minutes. Since there is no hub to connect to, you get to skip that step altogether, which streamlines things a bit.

Essentials has nice, clear video during the daytime. Colors are vibrant and there is very little distortion. The edges of the image are slightly curved, but not enough to interfere with the clarity. The camera does have problems focusing on faces, though. I noticed that they tended to look a bit grainy, especially farther away. The camera has a digital 12× zoom, so you can get a better look at unfamiliar faces farther away, but zooming in degrades the quality of the image even more, so it doesn’t help a lot. The sweet spot seems to be only a foot or two from the camera for the sharpest image. That’s not super helpful if you need the Essential to monitor more than just your front porch.

Faces were so blurred that you’d be hard-pressed to pick out any features.

Arlo Essential’s biggest innovation is its integrated spotlight, which lets you see color video at night. Does this innovative leap make waves? Not really. I found that the video quality still wasn’t great. Just as when it records daytime footage, faces were an issue, but to an even bigger extreme. Faces were so blurred that you’d be hard-pressed to pick out any features.  The colors and contrast looked great, but the camera just couldn’t seem to focus on people.

Essential is a bit bare-boned, which I guess explains the name. It does feature a siren and two-way talk, though. The 80db siren can be set to go off when motion is detected, or you can set it to go off only when you manually press the alarm button. Unfortunately, 80db isn’t very loud, and it’s one of the quietest sirens we’ve seen on outdoor security cameras.

The two-way audio allows you to talk with people who are around your security camera. You can hear them, and they can hear you — at least that’s the way the camera is supposed to work. I found that the Essential’s two-way talk was fairly loud if you’re the listener outside. I couldn’t hear anything but garbled noise through the app. The app tended to stall and buffer whenever I tried to use it, too, making the process even more frustrating.

One crucial missing feature found on other Arlo cameras is a privacy setting: Using it, you can determine what areas of your yard the camera can record. For example, on the Arlo Pro 3 Floodlight camera, if there is a part of your yard you don’t want to record, the camera will zoom in to avoid it. This feature comes in handy when you don’t want to record your hot tub area, for example, or where your children play.

One of my biggest complaints about the Arlo Essential was the battery. It ripped through a full charge in less than a week. One of the biggest reasons for this is there are two very limited ways to regulate the sensitivity of the motion detector. The sensors constantly getting triggered means the camera is constantly recording — and wasting the battery.

It ripped through a full charge in less than a week.

One way is setting up an activity area through the app, a spot the motion sensors will focus, so the camera won’t, say, detect activity on a busy sidewalk. Another way to decrease the number of times the sensors are tripped is to make them focus only on detecting humans or boxes and not animals or vehicles. Other cameras have the ability to turn down the sensitivity and/or the range at which the sensors can detect movement.

On a slow day, the battery used around 11% of its charge. So, if the sensors get tripped only every so often, you would still need to charge the camera every nine or ten days. That’s not very long, and would end up being a pain.

Even worse, the camera doesn’t have a removable battery, like the Arlo Pro 3 Floodlight does. This means you have to detach the camera from its mount (you have to unscrew it, which takes a minute) and then take it inside to charge. You can buy a solar panel attachment for the camera to solve the problem of taking it in to charge constantly, but I worry that the Essential uses more energy than the solar panel could produce.

While Arlo’s app is easy to navigate, I found that it glitches quite a bit. It froze when trying to set up the activity zones feature, for example. If this was a one-time fritz, no problem, but I continually had these moments while trying to use the app. When you tap from the miniscreen on the dashboard to full-screen view, the app buffers for several seconds, too, which can be frustrating if you’re trying to use the two-way feature to communicate with a person at your door, or simply want to take a better look at a person. Sometimes I found that the app would even buffer if I was just trying to view live video in the miniscreen.

The app isn’t all bad, though. One useful feature you won’t find in most cameras is lock-screen notifications, which you get here. That means you can see who’s at your door without even opening the app. That can save you time! Just glance at your phone and you’ll know exactly how to proceed.

There are two security features I like as well. If you connect your carbon monoxide detector or fire alarms with Arlo Essential, it can send you notifications when these alarms go off. Also through the app, one tap on the emergency button calls 911 (as long as you live in the U.S.) and tells them the location of your home automatically.

Though you don’t need a subscription to use Arlo Essential and its app, the camera is almost useless without one. The Arlo’s A.I. subscription-based service, Arlo Smart, gives you access to Activity Zones, e911 services, 30 days of cloud storage, and Advanced Object Detection that can tell the difference between a person, vehicle, animal, and a package. You get a three-month trial to start, then it costs $3 per month, which is really affordable. This price covers one camera, but if you have more, there’s a package that covers up to five cameras for $10.

The Arlo Essential just doesn’t hit the mark when it comes to video clarity, features, or the app. There are outdoor security cameras that have much better video quality for less than $130 with apps that work far better. I expected more from Arlo because ithe company’s other cameras are highly rated here at Digital Trends. It’s possible that Arlo hasn’t quite perfected the hub-less camera and needs to work out the kinks.

Yes. There are several really great choices on our list of the best security cameras, models that are less expensive and work better — although they may not have a built-in light. If you want a good floodlight camera, go with the Arlo Pro 3 Floodlight: The light is brighter, the siren is louder, and it has a lot more features for around $120 more. On the other end of the spectrum, the Wyze Outdoor Camera packs a whole lot of features for substantially less — that camera costs just $50!

The camera seems sturdy and well-made, but I have a big concern. Since you need to unscrew it from its mount every time you need to charge the Essential, I worry that the threads will quickly strip and you’ll no longer be able to mount the camera. The hardware does have a limited one-year warranty, and it will operate in temperatures of minus-4 degrees Fahrenheit to 113 degrees Fahrenheit (minus-20 degrees Celsius to 45 degrees Celsius). But still, these are real concerns.

No. There are just too many other low-cost outdoor security cameras on the market that work better and have more features.