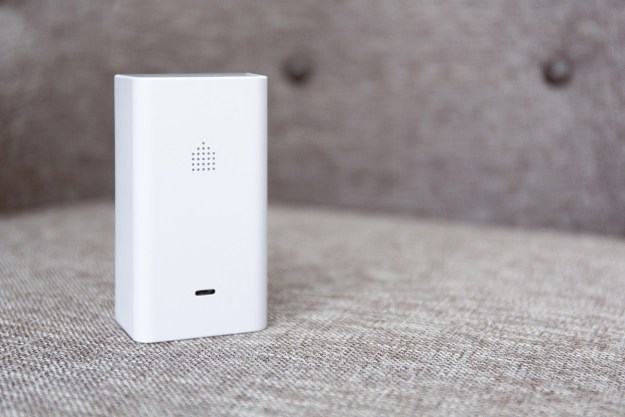 As the sun fades over 2017, it’s the perfect time to reflect on the state of the smart home. With a torrent of devices flooding the shelves of your local big-box store, business has never been brisker. Smart speakers, thermostats, vacuum cleaners, refrigerators, light bulbs and more – it seems that nowadays, all the devices in your home want to get chatty.

In smart home security, the battle rages fiercely. This year alone we’ve seen the likes of Amazon and Nest Labs launch new products, jostling for attention alongside already strong solutions from Ring, Netgear, August, TP-Link and others.  With high-quality hardware, compelling features and the great user experience these systems deliver, it can be difficult to separate the wheat from the chaff. Because, in truth, when it comes to these market-leading security systems, there’s very little chaff.

With the bar set high, it’s going to take real innovation to woo – and indeed wow – consumers. That’s where Aura, from Canada’s Cognitive Systems, enters the fray. Announced at CES 2017 (and recognized as a CES 2018 Innovation Awards Honoree), this second-generation security system uses patented wireless technology to monitor your home. No cameras or ugly laser transceivers are required. It’s a new take on home security, but does it do enough to compete with smart home favorites? Let’s take a look in our review.

Neatly presented in a white and sunshine-yellow carton, the devices themselves are reasonably chunky wall-warts that closely resemble Powerline adapters. Soft-touch plastics, gentle curves and solid construction ensures they’ll subtly blend into your home interior, without screaming “security.” However, given the price and size of the hardware, it’s a shame to see there’s no passthrough power outlet on offer, and a persistent, green LED light spoils the aesthetic.

Setup is managed through the Aura smartphone app, available for iOS and Android devices. It guides you through your first steps with home monitoring by asking you simple questions about your home – how many floors you wish to monitor, whether you have dogs or cats at home (and their weight) – before helping you position the hub and beacons.

The hub and beacon are clearly labeled to avoid confusion. Configuration should be simple enough for anyone who has previously set up a smart home device using their phone. Plug in the beacon, tell the app in which room and floor the beacon is located, then connect your phone to the device’s integrated Wi-Fi network to complete setup.

However, we had a number of basic issues. First, we found the Aura app to be unstable during setup. Switching from Aura to another app on our test Android phone caused the Aura app to crash, eroding confidence in the process. We had to repeat setup several times.

The second issue was more severe. When we were asked to connect our phone to Aura’s Wi-Fi network to continue configuration, returning to the Aura app did not provide an option to continue (such as a Next button or forward arrow). Despite the phone being connected to Aura, we were stuck in a loop, with only a button to re-open Android’s Wi-Fi Settings available on screen.

Upon restarting the app and running through setup a third time, we were able to continue setup, but found we could not connect the Aura hub to our Wi-Fi network, as the Connect button that sent our Wi-Fi password to the device was unresponsive. Given that this is second-generation hardware, these are all basic bugs that should have been shaken out a long time ago. This was a deeply-frustrating setup experience.

Abandoning Android, we switched to an Apple device to try our luck. The app crashed once this time, but we finally managed to complete configuration. Total setup time: one hour.

The Aura app is used to monitor live motion in the home and provides a series of charts showing historic activity for the last seven days. The system distinguishes between members of your household, but they must be invited as “members” in the app and then must download and install the app.

Aura uses patented spectrum analysis technology to detect motion around the home. Put simply, the beacons detect changes in wireless signals that are typically caused by motion. The system is sufficiently sensitive to distinguish between humans and pets, reducing the false alarms typically associated with motion detection in smart cameras or passive infrared systems.

In use, we found that Aura could indeed pick up motion, but it took a good few seconds before we saw the Live Motion icon pulsating in the app. The app shows a simplified view of each room with beacons, the idea being that you can tell exactly where in the home motion had been detected.

There are basic bugs that should’ve shaken out a long time ago, leading to a deeply frustrating setup experience.

Having placed beacons in a first-floor living room and third-floor attic, plus the hub in a second-floor bedroom, we were surprised to see motion reported in both the living room and attic when strolling around only one place. When walking in the bedroom, all three motion detectors fired, which was confusing. Why not report motion where wireless disruption is greatest? You are able to reduce the sensitivity of the beacons, with a choice of four preconfigured levels. However, dropping sensitivity a notch led to the beacons ceasing to report any motion, even when we walked directly in front of them.

Aura is equipped with customized scenes that define how the system monitors and responds to activity. They dictate how and when alerts are sent following motion detection, with a choice of push notifications and email. The Home scene, as the name suggests, is used when family members are present and disables most notifications. The system automatically switches to an Away mode when the family members have left the area. Night mode allows you to activate notifications from selected beacons during certain hours (handy for an entrance hallway, for example). The Pet scene helps Aura learn your furry friend’s motion when no one is home, and a Guardian scene is designed for monitoring remote properties or the home of elderly relatives.

Motion detection is useful, but a system such as Aura should really come into its own when connected to other devices – an alarm system, being an obvious choice, or smart lighting. Aura boasts support for the Google Assistant, Amazon Alexa, and IFTTT.

Tucked away in the web dashboard, there’s also a link to connect the system to Philips Hue. That was the first option we tested, but were disappointed to find that once we’d authorized the connection to Hue, we were unable to complete the connection as we were incorrectly routed to a development version of the Aura dashboard. It’s clear that third-party connectivity – like much of the Aura experience – is a work in progress.

That said, fire up your IFTTT dashboard and you’ll find a number of recipes available, connecting Aura to smart home stalwarts like WeMo, Netgear Arlo, Wink, Samsung SmartThings, and others. We tested Aura with an Amazon Echo and found it did a good job of switching scenes when asked. Say “Alexa, ask Aura to switch to Away” and the action was triggered within seconds.

Aura could indeed pick up motion, but it took a good few seconds before we saw the Live Motion icon pulsating in the app.

As usual with IFTTT recipes, you’ll experience some lag between a trigger and the resulting action, but the interactions work well. We linked Aura to a set of Philips Hue light bulbs with a recipe that flashes the lights when motion is detected. Walking around the home, we found that motion was detected within a couple of seconds and a smartphone notification popped up a second or two after that. The Hue bulbs began to flash around fifteen seconds later – a slight delay but acceptable for this kind of system.

However, these third-party partnerships illustrate a gap in the Aura proposition. Motion detection is good, and remote notifications are really useful. But local action is imperative if you wish to prevent an issue in the home. So, it’s a surprise that Aura has yet to build out a broader device portfolio – perhaps adding a home alarm, emergency lights or network cameras to its offer, like Abode .

The problem for Aura is that there are so many competing platforms that offer home intrusion detection with wider features, that that ultimately makes them and not Aura the better choice. With smart motion sensors for leading platforms like Samsung SmartThings available for less than $40, it’s tough to think up compelling reasons to spend five times that amount on a standalone system like Aura.

Aura is supported by a one-year limited warranty.

While Aura’s patented wireless motion detection technology is innovative, the question is whether the system does enough to justify a $200 minimum price tag. With scrappy implementation and incredibly strong competition from high-quality, multi-function smart home platforms, Aura is hard to recommend.

With motion detection a core component of many smart home platforms and security systems, it’s unclear why you need to spend $200 on a dedicated platform. Wireless motion detection may technically be a better option than visual detection systems offered by Nest Protect and Netgear Arlo or passive sensors supported by Wink and SmartThings. But it’s tough to argue that it’s worth the additional cost.

As a startup, there’s always the risk that Aura doesn’t gain the traction needed to build a long-term, standalone business or that the company’s technology is gobbled up and integrated by a larger player. With any small start-up, we’d always advise you to proceed with caution.

We can see how Aura’s novel approach to motion detection fits into a security ecosystem, more readily as an under-the-hood component or the driving force behind category innovation. The question is whether motion detection alone can justify a $200 (minimum) price tag. On this second outing for Aura, with a poor setup experience, limited features and imprecise (or at least, confusing) reports, the answer is no.