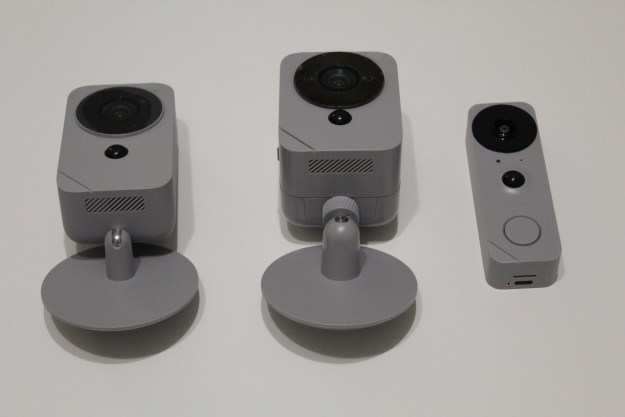 “Blue by ADT is a solid DIY alternative to expensive security systems, but Amazon's Ring and Google's Nest have better apps.”

DIY security systems are becoming more attractive, as they allow both homeowners and renters affordable home security options they can customize to their liking. LifeShield (now “Blue by ADT”) has become a well known name in DIY security systems. Blue by ADT announced three new cameras at CES 2020.

Here’s my full review of the Blue by ADT security system.

The indoor and outdoor cameras are both rectangular with a grey and black color scheme. The indoor camera measures 4.3 inches tall, 2.6 inches wide, and 1.8 inches thick. It comes with a stand, and you can sit it on a table, desk, or bookshelf; or, you can mount the camera on a wall.

The video doorbell matches the aesthetic of the security cameras, with the same color scheme. It has a thicker profile than other popular video doorbell options on the market, as it measures 4.9 by 1.7 by 1.4 inches. It has a blue light ring surrounding the doorbell button, so your visitors know where to press. Each device — both cameras and the video doorbell — have red lights that activate when the cameras detect motion.

Setting up the cameras, doorbell, and chime wasn’t the worst experience, but it also wasn’t as seamless as I expected. The chime gave me a bit of trouble. To connect the chime, you’re supposed to connect it to Bluetooth, so the app can locate it, and then connect it your Wi-Fi network. The app couldn’t locate the chime on my first several attempts, but it eventually connected after I performed a factory reset.

The outdoor camera was easy to mount.

Setting up the indoor and outdoor cameras was relatively painless. However, the app made me re-enter my Wi-Fi credentials for each device I connected, instead of simply having me select the camera from my phone’s Wi-Fi settings.

On the bright side, the outdoor camera was easy to mount, it securely stays in place, it’s IP65 water resistant, and it can withstand temperatures between 14 and 122 degrees Fahrenheit.

The doorbell has a battery backup, but it does not permanently run on battery power, so you must connect the device to your doorbell’s electrical wiring (AC power/16-24 VAC transformer). The installation process is no more difficult than that of most video doorbells on the market, though.

Once you go through the install process, you have to connect the doorbell to the app and once again, enter in your Wi-Fi credentials.

After you’ve connected all of your equipment to the app, you can set your preferences and determine what features you want to utilize.

Feature rich, with a few quirks

Since the system includes several components, I’ll go through each individually.

The outdoor camera’s rechargeable battery lasts for a long time.  After two weeks, the camera’s battery was still above 90 percent. It does well at withstanding different weather conditions, as I placed it in the middle of my yard and the heavy rain and humidity hasn’t affected its operation. The lens can become foggy though, so you may want to spray an anti-fog spray on the lens.

The outdoor camera’s rechargeable battery lasts for a long time.

It has a 1080p picture with a 130-degree field of view. The HD night vision works well, but the night vision is not as good as some of the other cameras on the market (it doesn’t compare to the Arlo Pro 3). The outdoor cam has other perks, like facial recognition, two-way talk, and Alexa and IFTTT compatibility. It comes with a month of free video storage. But, there’s an SD card slot for local storage as well. The camera has motion detection, but the motion detection feature has some quirks. It seems as though the motion sensitivity adjusts based on how sensitive the camera is to the proximity of motion, as opposed to the type or severity of motion.

The indoor camera has a lot of the features we’ve all come to expect from a modern security camera — 1080p video, two-way talk, motion detection with zones, and night vision. It also has facial recognition.

One cool feature is the ability to listen for smoke and carbon monoxide alarms, and it can send you a notification in response. It has an SD card slot, and battery backup for in the event of a power outage. You also get a month of free video recording when you purchase the camera. The indoor camera is a bit bulky, but it performs reliably overall.

The video doorbell offers night vision, facial recognition, two-way talk, motion detection with zones, and more. You can set the video doorbell to ring on the Chime and Extender, or you can have it ring on your existing doorbell chime.

The Chime and Extender

Another device that’s an optional part of the Blue by ADT camera system is the Chime and Extender. This device plays motion chimes and video doorbell chimes, while also extending the Wi-Fi range and battery life of the cameras.

It’s an approximately five-inch box that plugs into a wall outlet. It has two antennas protruding from it to help the cameras get a better Wi-Fi signal. It has the same color scheme as the cameras and doorbell, and once you plug it into an outlet, you don’t really notice it too much.

The Blue by ADT App

In the app, you can adjust all sorts of settings, set your notification preferences, view video feeds and clips, communicate through your cameras, and so much more. You can enable a privacy mode on both security cameras in the app, as well as set a security question.

The app isn’t always quick, but it does well with the cameras’ main functions. The biggest problem I’ve experienced is the outdoor camera randomly disconnecting. Some of the features, like the invite user feature, are hit and miss as well.

Blue by ADT and LifeShield

More components for the Blue by ADT system should be coming out in 2020. Later this year, Blue by ADT is coming out with a base and keypad. The indoor camera is also gaining the ability to serve as a base, so you can add a keypad and sensors to your DIY security system.

The Blue by ADT cameras are backwards compatible with LifeShield systems.

For now, you can use or purchase existing LifeShield products, and the Blue by ADT cameras are backwards compatible with LifeShield systems. If you want professional monitoring, you can pay $20 per month (the first month is free), and there is no long-term contract.

As a whole, this new DIY push is a welcomed effort, establishing itself as a competent offering in the same space as other players like SimpliSafe, Nest Secure, Abode, and Ring Protect. Even better, the company’s web site has been updated to reflect upfront pricing for its products and service, versus the “call us for a quote” approach that has served many security system companies in the past.

I asked ADT to explain some of the cameras’ privacy features in detail. In addition to the ability to put the cameras in privacy mode, Blue by ADT uses password security measures, like login failure lockouts and password strength enforcement, to help reduce risk. I did not see an option for two-factor authentication in the app though.

The Blue cameras are end-to-end encrypted.

The Blue cameras are end-to-end encrypted, and ADT’s security features include service-wide encryption, which improves the security for communication between devices, the ADT cloud, and the Blue by ADT app. ADT agents are unable to view live video or stored video from Blue by ADT cameras, and the cameras have an SD card slot for the customer to take advantage of local storage.

Blue by ADT cameras come with a one-year limited warranty.

The cameras in the Blue by ADT system are brand new, and as with many new products, there are a few kinks. But, each of the cameras and the video doorbell offer useful features, incorporation with additional security equipment, and compatibility with assistants like Alexa.

If you only want a security camera or you only want a video doorbell, there are better and more affordable options available. For instance, the Wyze Cam V2 is a great choice for those looking for a budget security camera, as it sells for as low as 20 bucks. And, in spite of the recent security concerns, the Ring 2 is still an excellent video doorbell pick, offering easy installation and battery power. You can find a refurbished Ring 2 for under $100.

The cameras and doorbell are sturdy and should last for several years with proper care. The doorbell and outdoor camera are both water resistant, and should be able to handle the outdoors. Also, the cameras will become more capable in the coming months as Blue by ADT expands on the system and comes out with new products.

For instance, the indoor camera will gain the ability to become a base for a more complete system. And, while the cameras are currently compatible with Alexa and IFTTT, they are pending Apple HomeKit and Google Assistant certification, so they should be gaining additional features later this year.

No. For those looking for a complete security system, Blue by ADT could be worth a look if budget is your primary concern. If you just want a standalone security camera or video doorbell, however, Ring and Nest do it better.