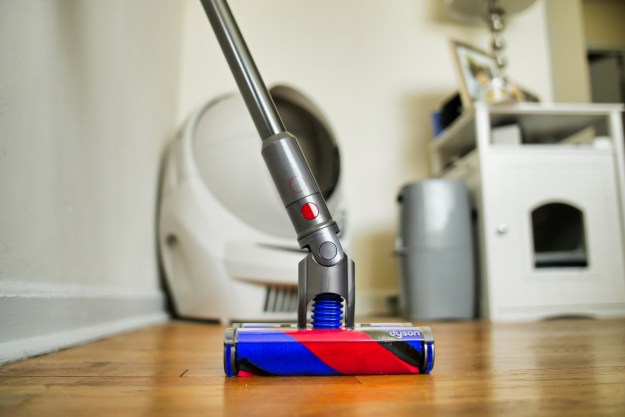 “It's the most fun you'll have scooping up debris on hard floors since the invention of the Swiffer.”

Dyson is back with yet another new cordless vacuum. Even though it may seem like a never-ending cycle, this latest one is in fact something different. Yes, it’s an upright cordless vacuum, but it’s been designed specifically for hard floors — making it more of a specialty cleaner than the general-purpose models the company is known for.

The Dyson Omni-glide is one of three new models the company is introducing this year, and from the looks of it, the Omni-Glide is being positioned as a permanent replacement for the tried-and-true Swiffer. At a whopping $400, though, it really needs to have serious substance in order to convince people to let go of their beloved sweeper.

Dyson’s designs are iconic and as instantly recognizable as Apple and its iPhones. The Omni-glide is no different from other recent offerings, such as the mighty Dyson V11 series, with the turbine-like shape that makes Dyson’s vacs so innately distinguishable. It helps, too, that it features the same vibrant purple and red accents that gives its look a more approachable appearance.

What’s most notable here is how lightweight and compact it is over previous Dysons. Tipping the scales at 4.18 pounds, it makes the V11 Torque Drive’s 6.68-pound weight feel heavy in the hand — trust me, it’s noticeable! Pushing around the Omni-glide is a breeze because of this, while using it to suck up dirt from high-up places with the crevice tool is an almost effortless process as well.

If there’s one ongoing complaint I have about Dyson’s cordless vacuums, it has to be that all of them require you to wall mount their included chargers. It’s no exception here with the Omni-glide either, and it’s just a pain being required to do this. I’d rather have a stand-alone, freestanding base, much like you find with the LG CordZero A9 or Samsung Jet 90, which both come with charging bases in the box that accommodate some of the included accessories. Unfortunately for the crevice tool with the Omni-glide, it’ll need a home of its own since there’s no built-in space to store it when it’s not being used.

A Swiffer with a permanent pad

With its omnidirectional soft roller cleaner head, the Omni-glide effectively acts like your traditional Swiffer sweeper, but without the need to buy replacement pads. Instead, the soft roller gently combs hard floors as the vacuum is being used. And since it sits on an articulating neck, there’s no wrong way of moving it around floors, furniture, edges, and corners. It’s actually a lot of fun vacuuming with the Omni-glide because the articulation is so smooth — you can even move it from side to side without affecting the soft brush’s rotational speed.

Obviously, the advantage it has over a traditional Swiffer is that you don’t need to continuously buy replacement pads. The soft roller cleaner head does a decent job of collecting small pieces of dirt and debris, but I found that large clumps of material or pet hair can be challenging for it to pick up. While there are few tangles that are visible on the rollers, I did notice that hair can still collect around the ends. Fortunately, there’s a latch on the roller head that easily removes the rollers to make it simple to access the ends where hair tends to collect. I also appreciate how it’s able to get into tight spaces, including underneath furniture.

Suction power from its eight radial cone system isn’t quite as powerful as the V11 Torque Drive, which is what I expected given that nothing has yet to surpass that model’s performance, but the Omni-glide is still a sufficient cleaner for quick, on-the-spot messes.

For lighter daily cleanings only

Due to its size and lightweight feel, the Omni-glide doesn’t have nearly as long a battery life as some of the more complete, all-purpose cordless vacuum cleaners. In fact, it’s rated for up to 20 minutes of battery before it’s tapped out and need to be returned to its recharging base. You can swap out the lithium-ion battery for another for continuous use, but it costs a staggering $150 for a spare.

It’s actually a lot of fun vacuuming with the Omni-glide.

Another reason why it’s not meant for heavy-duty cleaning is because of its 0.05 gallon dust bin, which is far smaller than those on other cordless vacs. This small volume means it requires frequent emptying. Speaking of that, I’m happy to say that you won’t have to worry much about dust blowback when emptying out the bin because pushing down on the latch safely ejects the bin’s contents.

For the cost, it really would’ve been nice to get more specialized accessories with the Omni-glide. The included crevice tool is ingeniously designed — the brush attachment can easily be attached over the crevice tool — but you don’t get anything else. I would have liked additional attachments that could help with mopping floors, or even another type of roller for cleaning furniture, but you only get the combination crevice tool in the box.

Taking into consideration its short battery life, small dust bin, and few accessories, most effective for daily cleanings. It’s the sort of thing that’s best for daily use after meals, just because it’s not meant for those once-a-month, heavy-duty jobs.

In true Dyson fashion, the Omni-glide’s cost is arguably going to be its most challenging quality. Its $400 price tag will certainly make anyone hesitate to buy it, especially given that you can buy a Swiffer sweeper kit for under $20. That’s a huge gap, but the Omni-glide’s advantage is that it can collect larger and heavier debris than a Swiffer. Plus, it works as a handy handheld because of its compact design.

Much like all Dysons, the Omni-glide features a sturdy build quality despite being constructed mainly out of tough plastic. I’ve dropped it a couple of times and it doesn’t show any indication of compromise to its performance. It does come with a two-year limited warranty that covers against defects.

Absolutely! The Dyson V11 series performs much better and comes with more accessories, making it a far more versatile package — if you’re willing to spend a couple hundred dollars more. If cost is a main concern, the Samsung Jet 90 and LG CordZero A9 are both wonderful solutions.

Yes, only if you live in a place that’s primarily filled with hard floors and don’t want the hassle of buying disposable pads.