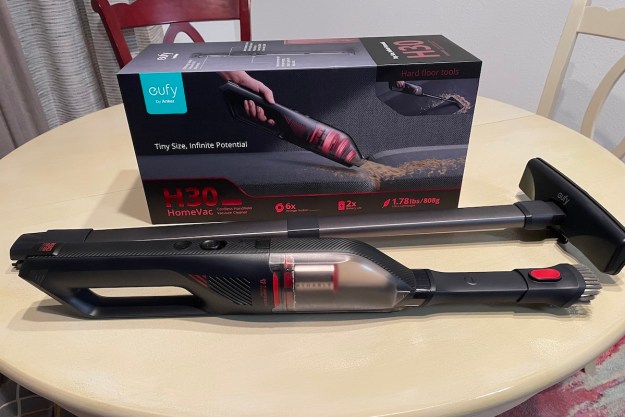 “The Eufy HomeVac H30 rocks powerful suction, but features a slightly unfriendly design that complicates the attachment process and isn't kind to the wrists.”

A mess can manifest in the blink of an eye. Perhaps you topped off the cereal bowl and some flakes took a dive to the kitchen floor. Or maybe the cat decided to become creative with litter dispersion throughout the homestead. And let’s not forget those ceiling-corner cobwebs that aren’t part of your Halloween diorama.

While today’s leading upright vacs are built for the kind of roll-up-your-sleeves, whole-home cleans that many of us relegate to free weekend days, having a go-to cordless handheld vac is the perfect solution for the tiny messes that spring up out of nowhere — the kind of debris you simply can’t avoid until Saturday.

One such cordless companion is the Eufy HomeVac H30. It’s designed for lightweight, quick-grab performance and comes packaged with numerous attachments (some good, some not so good). I was able to put the H30 to the test over a series of weeks. Here’s what we think of Eufy’s bite-sized cleaner.

The HomeVac H30 is available in three different model tiers: Venture, Mate, and Infinity (our test model). The fundamentals remain the same across the three tiers, with attachments being the trade-off from unit to unit. The Venture series ($160) is packaged with a 2-in-1 crevice cleaner and multisurface tool. The Mate ($180) adds a motorized brush for pet hair removal. The flagship Infinity ($200) comes with everything you’ll get with the Venture and Mate, along with a stick attachment and a hard-floor head for quick mopping jobs (plus disposable mop heads). All H30 models are available in both black and white.

Unboxing the H30 Infinity, I was also treated to a swappable lithium-ion battery pack, charging base, and wall-mounting accessories for hanging the charger (not required).

Right off the bat, I was struck by how light the H30 felt. Designed to be gripped with one hand, the entire vacuum only weighs 1.78 pounds. Dimensionally, the H30 measures 16.7 inches wide, 3.5 inches tall, and has a depth of 2.9 inches. Grip-wise, it honestly took me a minute or two to get used to holding the H30. It’s clear where you’re supposed to grab, but when you aim the vacuum down to suck up messes, the angle feels a little strange in the wrist department. Throwing on a cleaning attachment helps to cut down on how much angle you’ll need to dip into, but it doesn’t completely remove the discomfort.

The H30’s controls are front and center and easy to understand. There’s a power button, a toggle switch to move between Eco and Max suction power (more on these in the next section), and a trash can button that unlocks the dustbin. There are also three LED indicators above the power button to indicate how much battery life is left.

When you empty the H30, be sure to position the vacuum over your trash bag. After you unlock the bin, you’ll need to slide it all the way forward, releasing it from its track. Once emptied, it can be a bit tricky getting the bin locked back onto the vacuum body, but not overly so.

One of the very first things my eyes locked onto was how small the dustbin actually is. At 250 grams, it’s one of the smallest tank sizes you’ll find on any cordless vac. Have a dumped bowl of Lucky Charms to clean up, pre-milk? You may have to empty the bin once (or twice).

The cleaning attachments all do their jobs well, but they feel incredibly cheap.

The Infinity comes with a myriad of attachments, including a 2-in-1 crevice tool, a motorized brush head, and an elongated stick and cleaning head for getting at ceilings and floors. While useful, my overall impression of these add-ons is not a great one. Once locked in, they all do their jobs well, but they feel incredibly cheap, and some of them are downright painful to get attached to the H30 body. And other than some box-art images, there are no included instructions to teach you how to get things connected.

Eufy’s patented TriPower System is an onboard staple of each H30 model. It’s an engineering advent that effectively transfers more power from the battery pack to the vac’s motor, providing more suction power when you need it the most. But how does this translate to the real world? Pretty seamlessly.

I also liked the option of plugging the AC adapter directly into the battery, instead of having to dock the entire vac (with battery attached) onto the charging station.

Set to Eco mode, the H30 delivers up to 12kPa of suction. With just the 2-in-1 crevice tool attached, the vac did an excellent job of pulling dried oats out of my plushy dining-room carpet. I actually found when switching the vac to Max mode (for up to 16kPa of suction), it had a harder time getting the oats. That was until I moved to a new testing environment.

With the stick and hard-surface attachments locked in, the H30 operated like a champ in Max mode, sucking up all the oats I laid on the kitchen laminate in just a few passes. Eco Mode with these same attachments was good, too, but a little weaker.

I’ll be the first to admit that I have overly sensitive hearing and generally have issues with loud appliances, but my goodness does the H30 whine. Even when set to Eco, the sound of the vac simply running is on the high-pitched side. It’s not industrial loud by any means, but it’s certainly not as quiet as I was expecting it to be (considering the small size).

If you’ve got a quick spill that needs mopping, I would honestly recommend paper towels and your cleaner of choice over the H30’s mopping head and pads. Yes, it’s a nice consideration, but I found the attachments and pads tough to work with. In my cleanup test, the H30 cut through some of my intentionally spilled soda, but the sticky residue hung around.

The H30’s 2500mAh rechargeable lithium-ion battery isn’t the mightiest on the market. Built for up to 20 minutes of usage in Eco mode and only 10 minutes when set to Max, you’ll want to get your cleaning done quickly.

Low battery capacity isn’t a foreign concept in the world of handheld vacs, but when you consider that it takes up to four hours to restore the pack to its full charge, the lower runtime may become troublesome for some users. Fortunately, you can purchase additional batteries to swap in as you clean.

In terms of recharging, I also liked the option of plugging the AC adapter directly into the battery, instead of having to dock the entire vac (with battery attached) onto the charging station.

As a quick-grab, quick-clean cordless vac, the Eufy HomeVac H30 does a good job of sucking up messes that you don’t want to pull the big upright out of the closet for. It’s also perfect for cleaning cars, in-between couch cushions, ceiling corners, and other hard-to-reach nooks and crannies. From a design standpoint, it’s not the most comfortable handheld to wrap your paws around, and some of those add-ons can be quite the chore to attach.

Price-wise, I think $199 for the Infinity is a little on the high side, with $169 sounding a little more reasonable to me.

I believe so. The Black+Decker Max Handheld Vac features a 200-degree adjustable nozzle, and the 20-volt battery provides incredible suction power. Like the HomeVac H30, the charging dock can also be used to store all your attachments.

There’s also the Shark Wandvac. Similar in size and shape to the HomeVac H30, the Wandvac is comfy to hang onto and comes with a multisurface pet hair tool.

With the option to buy multiple battery packs, I can see the HomeVac H30 lasting for several years. Plus, Eufy’s hassle-free warranty keeps your H30 protected for up to two years.

If you absolutely need a handheld vac, and your store of choice has no other choices, I don’t think going home with the Eufy HomeVac H30 would be a bad idea. If there were other options, I may suggest purchasing a different model — mostly to save some money (and to gain some comfort).

What are HEPA filters, and can you clean them?