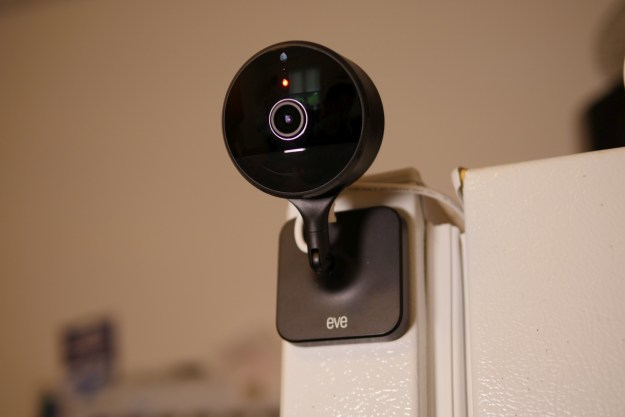 “Move along. You can find much better HomeKit-enabled cameras.”

We reviewed the Logitech Circle View not too long ago, and now we have another HomeKit-only offering — the Eve Cam. There are several similarities between the two, which is to be expected of cameras that support HomeKit, but it does shave a bit off the price.

I can’t stress enough the simplicity of setting up a security camera for HomeKit, but the Eve Cam is proof yet again. There’s technically no need to download an app, although it can be installed using the Eve app for iOS, which eventually just opens the Home app. From here, just scan the QR code on the Eve Cam using a iPhone XS — and that’s pretty much it. Simple enough? You bet! The benefit of HomeKit is that I was not forced to register a new account or set up passwords, since everything is managed through my iCloud account.

However, I did run into an annoying problem of initially being unable to connect to the Eve Cam after moving it to another room. I tried to manually reset the camera on several occasions, but my iPhone XS simply couldn’t recognize it.

After several more attempts, it somehow recognized it, but the same issue reoccurred when I tried moving it again. After retrying several more times, it miraculously connected, after which I noticed a firmware update notification.

Fortunately enough, that may have solved my reconnecting woes because the Eve Cam has since been able to reconnect whenever I unplug it.

Even though it’s a bit lower in price than the equally competent Logitech Circle View, the Eve Cam has an unflattering design. For starters, the all-plastic design makes it feel brittle and cheap. It lacks the substantial feel of the Logitech Circle View, which features a metal base and a matte finish on the exterior.

The Eve Cam has an unflattering design.

Once it’s plopped onto a surface, the sticky coat underneath its base ensures it’ll stay put. If you decide on mounting it to a wall or ceiling, it comes included with the necessary mount and a power cord that measures in at 7.2 feet long. The base is also magnetic, so that provides additional flexibility in choosing how to set it up.

The Eve Cam shoots video at 1080p resolution at 24 frames per second. While the resolution is what you’d expect from a camera in this range, the frame rate is very disappointing given that 30 FPS seems to be the norm. As a result, the footage doesn’t look smooth. You’ll still be able to make out a scene, but with the competition offering at least 30FPS, the Eve Cam’s lackluster framerate is a noticeable disadvantage.

Video quality isn’t worth writing home about either, largely due to its poor dynamic range, muted colors, and soft details. This is a more serious problem than the framerate.

When there’s a strong presence of contrasting light in the frame, the highlights are often blown out to make way for a more neutral exposure in the rest of the shot. It’s usually not too difficult to make out faces, but finer details often appear soft. You’ll have difficulty making out fine details in clothing, and objects in the distance can be very hard to identify.

Night vision gets the job done, for the most part. Visibility is average at around 20 feet indoors. That should be more than adequate for most average-sized homes, but again, the performance out of the Eve Cam is disappointing – mainly due to the soft visuals that makes details difficult to discern.

Lastly, the internal speaker can be used for two-way navigation, but it’s not going to startle intruders. It’s crackly, weak, and tough to discern voices through it. You’re more likely to confuse thieves than frighten them.

Being a HomeKit-enabled security camera eases any concerns regarding privacy. In fact, all HomeKit-supported cams offer the same privacy features. This includes encrypted video stored in iCloud, LEDs on the camera to indicate the Eve Cam’s status, the ability to electronically disable the camera based on my iPhone’s GPS location, and more.

The Eve Cam has all the basic ingredients to make it a decent HomeKit-enabled security camera, but disappointing image quality, low video framerate, and mediocre design put it well behind the rest of the pack.

The all-plastic construction makes it lightweight, but brittle. It may not hold up as well as other cameras. It comes with a 1-year limited warranty that covers against defects, though that is standard in the industry.

The Logitech Circle View is a solid HomeKit-enabled camera that has all the same features, but performs significantly better and has sturdier design. Best of all, it won’t cost you a whole lot more to pick it up over the Eve Cam.

Are you on a budget? If so, the Eufy Indoor Cam 2K Pan and Tilt is the ultimate indoor camera because of its affordable $50 price and ability to cover 360 degrees of vision with its pan-and-tilt feature.