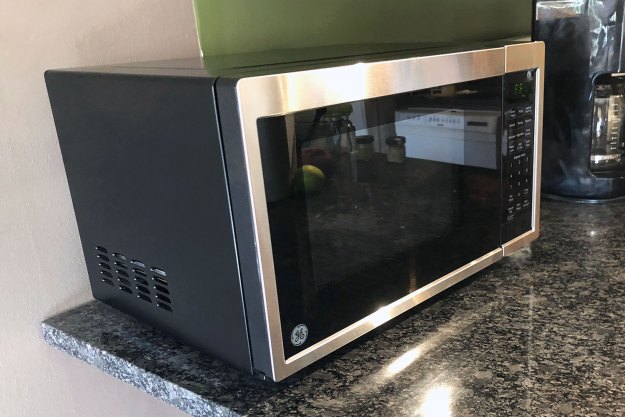 “There’s no more fumbling with power settings thanks to GE’s smart microwave.”

“I don’t know how to use my microwave,” our friend, who has a Ph.D. in electrical engineering, recently confessed. “I just heat things for a minute, then if it’s not done, add another minute.” This admission came when we explained we were testing the GE Smart Countertop Microwave Oven. The appliance is Wi-Fi connected, works with Amazon’s Alexa, and has scan-to-cook technology. It all sounds pretty smart, but will it deliver a better Bagel Bite or save our friend from guesstimating how many times she should hit the “add 30 seconds” button?

Before you can take advantage of any of the GE microwave’s smart tricks, you need to do some setup beyond the usual plugging it in and balancing a rotating plate on its perch. To set up the appliance on your Wi-Fi network, you’ll have to download the GE Appliances Kitchen app (iOS and Android) and follow the instructions. You’ll press the “Wi-Fi Connect” button on the microwave, connect to its network, then connect it to yours. The Wi-Fi Connect button — which you shouldn’t have to use very often — is strangely located where we’d expect the start button to go. Instead, the start button is in the middle between the connect and stop buttons. It took a while for us to stop almost hitting the connect button when we were just trying to microwave some leftovers.

Once the microwave is on your Wi-Fi, you can use it with your Amazon Alexa devices, if you have them. We’ll admit it: We didn’t read the instructions before starting. We’d previously connected a GE oven to our Echo Dot, so we assumed we’d use the same Alexa Geneva skill for the microwave. After Alexa saying “I’m not quite sure what went wrong” and “Darn, I’m a bit confused,” (same, Alexa, same), we figured out we needed a different skill, the “U+ Connect.” We’re not sure what the difference is, except that we can just ask Alexa to control the microwave, instead of asking Alexa to ask Geneva to add 30 seconds or whatever.

Safety features keep you from turning it on when there’s nothing inside.

If asking Alexa to turn on your microwave sounds a bit unwise, there are some safety features. We’d had a mug of water sitting in the microwave while we tried to connect to the Echo Dot. When we asked Alexa to “microwave coffee,” the voice assistant responded, “The microwave door has been inactive for too long.” The GE app similarly sets the microwave to “off” and won’t let you turn it on if the door hasn’t been opened recently.

That does come at the cost of a bit of convenience. If you wanted to stick a mug of water in there at night and ask Alexa to heat it up when you wake up the next morning, it’s not going to work. We’re not sure if anyone would actually want to do that, but it doesn’t matter. You can’t.

A man’s got to have a barcode

Beyond the Alexa integration, the GE smart microwave also features “scan to cook.” For a variety of foods from Kraft, Amy’s Kitchen, Campbell’s, and other brands, users can scan an item’s barcode and send the cooking instructions to the appliance. We received a list of more than 2,900 snacks, soups, oatmeal, and other foods that work with GE’s scan-to-cook app.

Trying to shop via the list was a bit challenging. The fancy packaging of Heinz’s Devour meals caught our eye in the frozen food case, but when we cross-referenced with GE’s compatible list, only two of the six were available in the store. Meanwhile, several that were in the store weren’t on the list. Bacon and mac-and-cheese it was. Another thing to watch out for is that GE also uses scan-to-cook for some connected ovens. So even though cake mixes, entire pizzas, and Toaster Strudels were on the list, they weren’t microwave-friendly. If the box didn’t have microwave instructions, we left it on the shelf. (Okay, fine, we grabbed some Toaster Strudels to see what would happen, and the app told us no recipe was found.)

There was nary a kernel to be seen, but the popcorn was a bit burnt.

We ended up making pasta, popcorn, chicken tenders, frozen broccoli, and pizza bagels with the feature, with mixed results. The app beamed the exact instructions for the Devour pasta to the microwave — 3:30 minutes on high — that showed up on the box. We still had to push start on the microwave itself. Then we were instructed to peel back the film and stir the pasta. The microwave then set itself for another two minutes of microwaving, just as the box instructed. The odd thing is that those instructions are for an 1,100-watt microwave, while the GE microwave is only 900 watts. It’s a bit surprising the scan-to-cook feature doesn’t take this into account and make the adjustments. To be fair, our pasta ended up uniformly heated throughout.

We’re willing to bet most people don’t know, offhand, how to adjust the cooking time for their microwave if there’s a wattage mismatch. Epicurus recommends adding 10 seconds on the recipe cook time for each 100 watts above your appliance’s. If your microwave is more powerful, divide the recipe’s wattage by yours, shift the decimal two places to the right, and set your machine to that power. All that math is why it would be nice if the machine did it for you. However, it’s nice that if you have an Echo device, you could ask Alexa to microwave at 70 percent power for three minutes instead of fumbling with the buttons.

Oddly enough, the GE microwave didn’t always follow the packages’ instructions to the letter. For our frozen broccoli, the app recommended we add two tablespoons of water, while the bag didn’t mention H2O at all. Our Bagel Bites were supposed to be microwaved on high for two minutes and 10 seconds, per the box, but the app set the microwave to 50 percent power and rotated them for “five to six minutes,” according to the app. While they weren’t universally crispy on the bottom, they were the best microwave bagel pizzas we’ve had.

One disconcerting feature was the notifications. It was one thing for them to pop up when we were waiting for our broccoli to finish, but another when we were out of town and were notified that our microwave was done. We really didn’t need to know every time our spouse was heating up water for tea, thanks very much. You can turn the notifications off, but getting there isn’t very intuitive. You have to click on the microwave icon on the app, then click on the menu button from the next screen.

For the final scan-to-cook test, we decided to pop some popcorn and pit it against Alexa. The app followed the bag’s instructions — which, hilariously, warned us not to use our microwave’s popcorn button. Ouch. Instead, it had us put the microwave on high for four minutes, then instructed us to listen and stop it when the popping slowed. We did so after almost two minutes. There was nary a kernel to be seen, but the popcorn was a bit burnt. Next, using another package from the same box, we asked Alexa to microwave popcorn. She wanted to know how much it weighed, so we had fumble around for the box. “3.2 ounces,” we told her. She didn’t understand us. After some back and forth, we settled on 3 ounces, and she turned on the microwave for about 1:47. There were about 20 kernels at the bottom of the bag, but the popcorn itself was golden and unburnt. We felt ashamed of ourselves.

Besides the scan-to-cook feature, there isn’t much to the GE app, which is a missed opportunity. The microwave itself has all the usual buttons, including the apparently useless popcorn setting. But it would be useful if the app went beyond barcodes. Microwaves are great for cooking fresh vegetables, but we’ll be darned if we know how long to make asparagus for. If we could use the app to specify what type of food we’re making and how much of it, we probably wouldn’t have to suffer through mushy veggies again.

This GE microwave has a one-year limited warranty.

For $139, GE’s Smart Countertop Microwave has so much potential. The Alexa voice control and scan-to-cook technology could be genuinely useful for people with vision issues. We’re guessing a lot of people change the power level on their microwave roughly twice a year, and anything that makes that more intuitive is a good thing. We’d love to see a more robust app that incorporates fresh food, as well as more tailored scan-to-cook instructions that actually take into account this microwave’s lower wattage.

Whirlpool also has a scan-to-cook microwave, but it’s $639. It’s over-the-range instead of countertop, and its capacity is 1.9 cubic feet instead of GE’s 0.9 cubic feet. The Whirlpool model also uses convection cooking, so that raises the price as well.

One nice thing about smart appliances is they can get software updates with new features. Because they’re connected, manufacturers can also diagnose problems more easily. That being said, the scan-to-cook feature will only remain helpful as long as food brands are willing to support it.

Right now, the smart features for this GE microwave are very packaged-food centric. If your diet revolves around pre-made soups, frozen meals, and popcorn, you may find the scan-to-cook feature helpful. It could potentially help those with vision impairments, as well. We’d still wait to see if GE beefs up the app to include more fresh food content if that’s your (homemade) jam.

The OnePlus 10T just leaked with a few disappointing changes