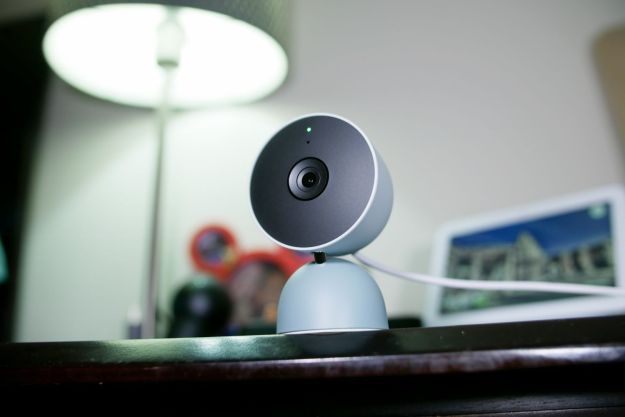 “This is one security camera that doesn't require constant babysitting thanks to its smart features.”

Google’s security camera lineup was recently expanded to offer more choice than ever before, without compromising too much on features. In fact, the introduction of three hours of free video history without the need for a subscription makes this crop of Nest Cams far more attractive. However, Google doesn’t make it easy for consumers to distinguish its new cameras — both the battery and wired models make use of the Nest Cam moniker.

While the Google Nest Cam (battery) offers added versatility because it can be used indoors and out, the Nest Cam (wired) on the other hand is a true indoor solution made better thanks to a lower $100 cost. There are many other indoor cameras at this price range, including models from Ring, Arlo, and Wyze, which makes it a tough battle for Google this time around.

Right out of the box, I’m astounded by the smaller design of this camera in comparison to its outdoor sibling. There’s a substantial difference with the Google Nest Cam (wired). It doesn’t overwhelm countertops, tables, and any other small nooks around the home where you may intend on installing a security camera.

It’s also smaller in size than the previous Google Nest Cam IQ Indoor, but it retains the same modern look that makes Google’s cameras cozy and attractive. Consumers will appreciate how it’s constructed from 45% recycled plastic parts and available in four colors (snow, fog, linen, and sand). The only complaint I have is the limited articulation of the camera — you really can’t tilt it upwards all that much when it’s placed on a low surface.

Similar to the battery-powered version, the Google Nest Cam (wired) only requires setup through the Google Home app — it’s no longer tied to the dedicated Nest app. That’s wonderful because everything is controlled and accessed through one app. All of the event history is displayed in a convenient timeline view, but I also like how you can filter it by cameras if you happen to own multiple ones from Google.

Once connected to my home’s Wi-Fi network, there’s very little latency exhibited by the camera once it’s turned on, but there’s about a five-second delay before I’m able to see the livestream. It’s not too bad I suppose, but I can certainly understand how those five seconds could become critical during an event.

While it’s meant to rest on surfaces, there’s always the option to wall-mount it as well — thanks in part to its lengthy cable. The downside to this is that the wire can’t be removed. It’s integrated into the camera, so if the wire goes bad somehow, you pretty much have to replace the entire unit.

In terms of specs, the camera in the Google Nest Cam (wired) is tepid in comparison to the well-known cams in the space. The 2-megapixel camera sensor shoots video at 30 frames per second (fps) in 1080p, but there are cameras now that shoot in 2K and 4K. Generally speaking, it produces some adequate detail, but it doesn’t reach the same level of clarity I’ve seen with the Google Nest Cam IQ Indoor.

There’s some artifacting that happens, which is a bit distracting and becomes more apparent when there are sudden shifts in the ambient light. It also tends to saturate colors a bit more, so it sort of looks unrealistic at times. When the night vision goes on, the footage has a tendency of appearing low-contrast, which I suppose is a good thing because it boosts the exposure of the shadows.

Even though I’m not blown away by the video quality, I have to admit that the Google Nest Cam (wired) is spot-on with detection. So far, it’s been on point with telling between people and my cats, which are noted in the app.

What I really like about the latest set of Google Nest Cams is that they all can be disabled based on my phone’s location — allowing them to automatically turn on/off for better privacy. Once I’m home, the camera automatically turns off, but then turns back on when I leave the geofenced area around my apartment. Not having to manually set the camera to home or away mode makes for one less thing to worry about.

There’s also a green LED light on the camera that turns on whenever the camera is active. These are just a couple of privacy features that I like about Google’s cameras. They also include up to three hours of event video history for free and saves those clips for you to review. There’s no subscription needed for this, but if you want to extend the allotment, you’ll have to subscribe to Nest Aware, which is $6 per month and provides 10 days of 24/7 video history and 60 days of event video history.

In the event of an internet outage, there’s still peace of mind because the Nest Cam (wired) will continue to save footage locally. Unfortunately, there’s nothing it can do when the power goes out — which is what makes the battery-powered version more appealing.

Looking across the product category, Google’s offering here doesn’t try to blow the competition out of the water. It doesn’t need to because it’s a simple camera that’s effective at capturing events. At $100, it’s not too shabby given it takes away some of the frustrations I have with most security cameras — frequent false alerts and manually arming them are two of the most glaring points.

When it comes to indoor cameras, the Arlo Essential Indoor Camera is its closest rival at the same $100 cost. I like it because it actually features a physical privacy shutter that goes over the lens to ensure that no one is watching when they’re not supposed to, unlike Google’s software based privacy feature that turns off the camera.

Another alternative is the Wyze Cam V3, which at under $40 is still one of the best bang-for-the-buck security camera deals you can get. It’s designed to work indoors and out with its weather-resistant construction, plus you get the added convenience of local storage with its MicroSD slot.

If you’re an Alexa user, the Ring Indoor Cam offers similar features and performance for $60.

Despite a chassis constructed from mostly recycled components, the Google Nest Cam (wired) feels like a well-made, solidly constructed camera that’s well worth its price. There’s a one-year limited warranty that covers against defects.

Yes, even though it’s not the finest offering Google has brought to the table. While it lacks the sharp clarity of other cameras, it does a wonderful job at actually providing meaningful alerts.