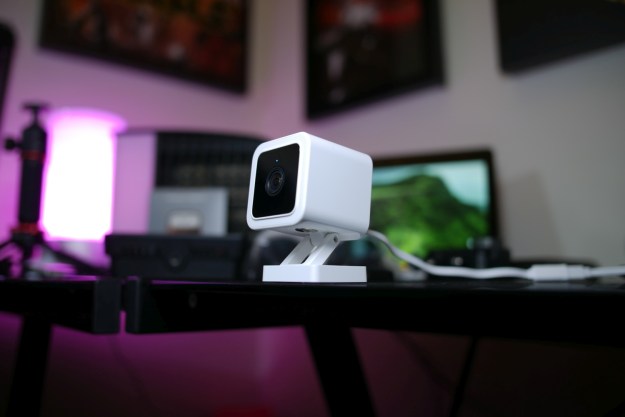 “It's almost unbelievable that Wyze has packed so much into something so cheap.”

The onslaught continues! Wyze has been operating at breakneck speed the last few months, announcing a slew of new smart home gadgets that seemingly diversified its portfolio overnight. Its latest announcement, however, is actually a follow-up to one of its most popular gadgets. Going back to its roots, the Wyze Cam v3 is looking to entice consumers not only because it works both indoors and out, but also because it’s rich in features and costs less than $20.

Iconic design that handles the outdoors

The original’s iconic design remains a staple here with the Wyze Cam v3, featuring a cube-shaped design constructed entirely out of plastic. For a security camera, it’s undeniably compact enough to be discrete wherever it’s placed. The camera itself can be rotated around its base and tilted to just about any angle to get the best vantage point. Unlike its predecessors, it’s now designed with an IP65 construction to handle the great outdoors — making it more versatile than before.

However, if there’s one aspect to the design I’m not thrilled about, it has to be the dangling power cord. There’s a short 8-inch cord that ends with a female Micro USB port, which then connects to a standard Micro USB cable. Since that short 8-inch cord is permanently attached to the camera, damaging it by accident or just going bad on its own, means that the entire unit would have to get service — rather than just swapping a Micro USB cable like on other cams.

It’s definitely a cause for concern, but I also understand it’s probably a necessary change to make it weather resistant. Still, the design is an upgrade because it can be used either indoors or outdoors for more versatility than before.

Security cameras offer a great deal of information with their recordings. The Wyze Cam v3 packs an upgraded camera featuring a wider 130-degree field view, 20 FPS capture, Starlight CMOS sensor, and an f/1.6 aperture. While it still tops out at 1080p resolution just like the v2, every other aspect of the camera is substantially improved.

For starters, the wider field of view captures more of the scene, which is useful if you place it in a corner to get the most coverage. The Starlight CMOS sensor is arguably the showcase feature here, seeing that it allows the v3 to see in the dark a lot better and draw out details — while also delivering color night vision to the conversation.

By itself, the 1080p video it produces is sufficient in detail and quality, though its dynamic range can be a challenge when there are contrasting light conditions around, which generally overexposes the highlights. Still, I’m able to make out other small details from the footage, and it proves its worth when the sun goes down with its color night vision.

While standard night vision in black and white makes it easy to see in near pitch-black conditions, the added benefit of color vision provides greater detail — such as being able to distinguish the color of a person’s shirt. This is invaluable information in emergency situations, so it’s fantastic that color night vision is offered. Comparing the footage side-by-side, color night vision without question coughs up details you won’t find with standard night vision. However, there still needs to be some degree of ambient lighting in the scene for it to work effectively. If there’s none, colors are nearly impossible to distinguish.

Two-way conversation is also pleasant, producing clear voices through the app and decent volume through the speaker.

Typically speaking, cheap cameras tend to be elementary. That’s far from the truth here with the Wyze Cam v3. This proves to me that it’s able to keep my apartment safe when I’m not around. First of all, Wyze has the necessary controls to cater to my needs. From being able to record based on motion or sound detection, setting detection zones to minimize false alerts, and adding custom schedules and automated operations, there are a fair number of options to choose from. There’s even an option for it to detect smoke and carbon monoxide sirens going off, which would then send a notification.

All of this shows that the brand has a deeper understanding of users’ security and privacy needs. Even though there is 14 days of cloud storage that saves 12-second clips, I appreciate that there’s the option for local storage via its microSD card slot. I’d recommend taking advantage of the microSD card because just like the Wyze Outdoor Cam, it has the ability to capture time-lapse shots of just about any length.

It’s there to keep my apartment safe when I’m not there.

Rounding things out, there’s two-factor authentication, an integrated siren that can be activated through the app (it’s on the weak side), and an option to electronically turn off the camera through the Wyze app.

The Wyze Cam v3 sets the benchmark on what it means to be an entry-level security camera in this day and age, with its ridiculously low $20 cost. You won’t find anything remotely close that contains the same set of security features, versatility indoors and out, and color night vision that offers greater detail over standard night vision.

Besides the concern I mentioned about the proprietary dangling cord, it’s solidly constructed. Since it’s made out of a tough plastic casing, its light weight will help to ease damage due to drops. In the event something does go bad internally due to a defect, there’s a 1-year limited warranty.

If you’re willing to fork out a bit more, cameras like the Ring Indoor Cam and Eufy Indoor Cam 2K Pan And Tilt are top contenders because they’re not exorbitantly priced. The former benefits from leveraging Ring’s diverse ecosystem, while the latter has a useful 360-degree pan and tilt feature. There’s even the Wyze Cam Outdoor to consider because it’s very similar, but features an internal battery that allows it to operate offline without being connected to a power source.

You shouldn’t just buy it, you should probably buy a few and build out a decent security camera system in your home for a fraction of the price you would pay for other complete systems.