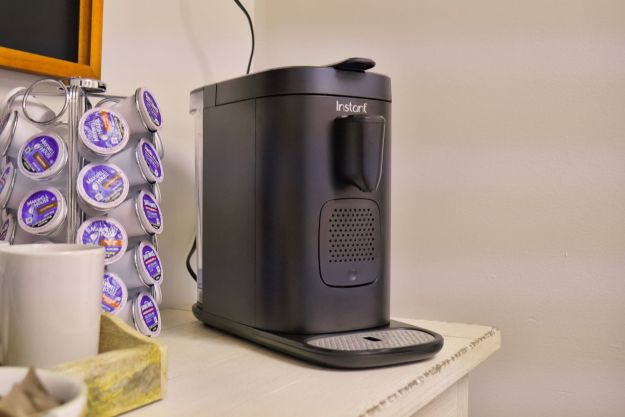 “Nothing's simpler, easier to use, and saves space like the Instant Pod.”

Having conquered the slow cooker and pressure cooker markets, small appliance maker Instant Brands, known for its exquisite line of Instant Pots, is branching out and tackling the coffee making world. Attached with an irresistible $119 price tag, the Instant Pod looks mighty tempting, being a 2-in-1 system — capable of brewing both coffee and espresso in one, easy-to-use machine. With that combination, it certainly will give other popular brewers a run for their money.

I may not be a coffee snob, but coffee is the first thing on my list to have every morning before starting work. In that sense, I prefer something that’s quick, simple, and doesn’t require a whole lot of cleanup afterwards. Well, you know what? The Instant Pod is the kind of machine that I need to help get me started because brewing a cup of joe is so simple and straightforward.

Whether you prefer coffee or espresso, it has you covered because it can brew both. Pulling open the top lid reveals two compartments, one for coffee via any of your favorite K-Cup pods, and the other for espresso via Nespresso’s bullet-shaped capsules. Whatever preference, you pop it in, close the lid, place your mug/cup into the appropriate spot, and then you choose a drink size. For coffee, you have three options: eight, ten, or twelve ounces. For espresso fill ups, you also have three to choose from: two, four, or six ounces. That’s it!

In under a couple of minutes, you’ll have a fresh cup of coffee or espresso to wake you up — and there’s barely any cleanup! Sure, a few drops may splatter inexplicably, but you can remove the plate from the base and rinse it off quickly. Thanks to its simplicity and ease of use, you can still be half-awake and brew a cup of coffee with zero problems.

Coffee snobs will argue about what’s the best brewing method to get the richest and boldest taste out of your coffee, but the K-Cup I brewed came out just as I like it. There’s no harsh or bitter taste; despite the injection of piping hot water into the plastic pod, the outcome is no different from other Keurigs I’ve used in the past — and that also applies to reusable K-Cups with your own grinds.

If you prefer espresso drinks, the Instant Pod gets the job done using just about any of the Nespresso original capsules, but it’s worth pointing out that it does not accept Vertuo capsules (due to the slightly more oblong shape). The only missing option with the Instant Pod is the ability to manually dispense hot water. If you want to add in just a little bit more water to dilute the drink, there’s no option here for that.

The design save space

Compared to the first Keurig single cup coffee brewer I used, the Instant Pod is a space saver with its narrow design, although it’s a little deep in terms of its front-to-back measurement. Despite that, the all-plastic construction feels solid and incorporates a pull-out tray for those espresso brews. It will also discard used Nespresso capsules into a compartment inside of the machine so that you don’t have to take them out after every brew.

It’s a low-maintenance machine that I adore.

If you’re the kind of person who drinks one cup of coffee a day, the Instant Pot will be more than enough to carry you through a work week. That’s because it features a 68 oz water tank that’s positioned in the rear of the coffee machine, which can be removed for quick and easy refilling and cleaning. Like I said, it’s a low-maintenance machine that I adore.

Single cup coffee drinkers will absolutely fall in love with the Instant Pot, more so when it can brew either coffee or espresso. It’s priced accordingly at $119, making it an easy investment that’s sure to keep you powered through your mornings.

Even though it’s made primarily out of plastic, there’s very little to worry about because it’s going to remain stationary wherever you put it. If you’re worried about something going bad, such as its touch-sensitive top panel, there’s a one-year limited warranty that covers manufacturer defects.

Yes, but you won’t find the same space-saving design, ease of use, and minimal cleanup that the Instant Pod offers. Other combo machines that can brew coffee and espresso also tend to be pricey, easily going for as much as $200+ — plus, they’re more traditional brewers that can be more complicated to operate.

Absolutely. You get the best of both worlds without having to spend a fortune.