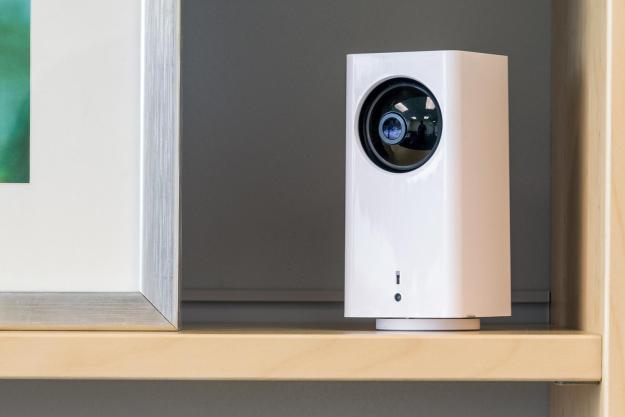 “The iSmartAlarm will make you feel secure, and with good reason, but it is missing a couple features.”

When it comes to home security, you want your system to be unobtrusive — unless someone’s actually breaking in to your home, and then it should raise hell, right? That ear-splitting wah-wah-wah isn’t a feature of all DIY security systems, but it certainly is present in the iSmartAlarm. Along with it, you get a cute little cube, contact sensors, a motion detector, and a few other accessories to keep your home safe. It’s easy to install and works like a charm (sometimes a little too well), though there are a few things missing that keep the iSmartAlarm from being the total package.

Whether you opt for the iSmartAlarm Preferred Package ($199) or the Premium Package ($349), you get the hub, the CubeOne; two door or window sensors; a motion sensor; and two remotes. The extra money in the premium version is for the iCamera Keep. Extra add-ons include two extra contact sensors ($60) and a smart switch ($40). Every component is white. The four-inch CubeOne is sleek and modern, yet still manages to remind me of a cube version of the glowing ball Bodai from that ‘80s movie Solarbabies. Its LED light “breathes” white when everything’s working and turns red when something’s wrong, pulsing during an alarm and staying on when there’s an error.

To set it up, you download the app (iOS or Android), plug in the power adaptor and connect the cube to your router. There are little insulation tags on the sensors that keep them from making a connection, so you’ll have to remove those. Once you launch the app, you’ll need to create an account, tied to your cell phone number. The app will guide you through the steps, including searching for your sensors, motion detector, and remotes. The first time going through this process was a breeze. However, if you delete the OneCube from the app, you’ll have to remove the batteries from all the devices, wait 10 seconds, then slide them back in. It’s quick enough for the contact sensors, but the motion detector and remotes all have tiny little screws that you’ll have to remove. The CubeOne doesn’t include a battery backup, so if your power goes out, the whole system shuts down.

You’ll get a phone call confirming your number, and that’s how iSmartAlarm will contact you if your alarm goes off. To add the optional camera, you’ll need your phone charger; attach your device to the Keep, and you’ll be asked to share your Wi-Fi settings so it can connect to the network. Now you can start placing the devices around your home. The sensors and motion detector attach to the wall with adhesive backings. No pressure, but you’ll want to get the placement right the first time, as it’s a little difficult to remove from the wall once it’s on there, and it loses its stickiness with each successive placement. If properly installed, the contact sensor reliably sends notifications every time the door opens, for example, and the motion detector does the same when it picks up movement.

The quick installation guide sort of leaves you on your own at this point, staring at a screen with four symbols with words underneath. Arm, Disarm, and Panic seem straightforward enough, but there’s also a Home option. If you click the Arm button, everything activates; your CubeOne will start to beep, and you’ll have three minutes to leave your home before it starts emitting a painfully loud squawking when you set off the motion detector.

You’ll definitely want to delve a little deeper into the settings before slipping out the door. Don’t want any alerts? Click on Disarm, and you won’t get any alerts at all, and it will also silence the Panic alarm. The 110-decibel alarm is louder than a car horn, according to iSmartAlarm, and cats definitely hate it. Luckily, there are three volume settings, or you can disable it completely. The Home setting keeps the sensors active, but quiets the motion sensor’s alerts, while still keeping a log of every time it’s triggered. There’s a Safety Monitor mode that also gives you contact-sensor notifications, even when the system’s disarmed.

Under the More tab, the app has lots of other options for customization, too. You can change how long it takes to arm or disarm the system, the sensitivity levels of the camera, and what sort of audible notifications you want the CubeOne to make. This is also where you can name your devices, because Front Door is much easier to remember than a string of numbers and letters. You also have the option of assigning a photo to any device.

If you want more flexibility, you can also create Custom modes, including one that, for example, only activates when the camera picks up motion or sound. The Keep is a five-inch-tall pillar that has the ability to pan and tilt, 40 degrees up and down and 350 degrees around. Just open the live stream in the app and slide your finger around the screen to get a nearly complete look at what’s going on in your room.

It was really responsive, with only a slight lag as the camera whirred to life and turned around.

It was really responsive, with only a slight lag as the camera whirred to life and turned around. The 1280 by 720 resolution is clear enough to get a good picture, and the same goes for the night vision. If you have the motion or sound activation features engaged, the Keep will automatically record a video. Hope you weren’t doing anything embarrassing, because there’s no way to delete this video; the system keeps the clip until you’ve reached five minutes’ worth of video, then it deletes the oldest one. This is part of the company’s “no-fee automatic cloud video storage.” Each clip is about 10 seconds, fewer if you’ve ripped the plug out of the outlet to silence the racket the CubeOne is making. You can also snap a picture of whatever your camera’s aimed at.

The remote is sort of like a squat domino you can attach to your key ring. While at first it may seem superfluous — it has the same four buttons that are on the app’s home screen — the white plastic rectangle also works as a proximity sensor. Assign one to your smartphone-less kid, and they will be able to disarm the system when they get home. You’ll also be able to track if they head home while playing hooky from school in the Monitor section, because the app logs every time the remote leaves and arrives. You can also see a similar activity log when you tap each connected device in the Device Settings section in the app’s More tab.

If that seems like a lot of steps to take, it is. The app isn’t fully intuitive. The account settings, for example, are accessed via the system icon in the top left corner of the Control tab. The icon doesn’t even look obviously clickable, and it made me wonder why it wasn’t found in the More tab. The sense that you have to jump through a lot of hoops to do something simple extends to the Smart Switch, which plugs into your outlet and turns un-connected devices smart.

My lamp has a busted switch, so being able to turn it on without having to plug it in was a real treat. However, it took the following steps to accomplish that task: Opening the app, opening the Monitor tab, clicking the Safety Monitor tab, hitting the Lamp button, and finally, pressing the On button. Alternatively, I could just hit the button located on the Smart Switch, which I invariably ended up doing.

But the switch isn’t really meant for that kind of operation. Instead, what ended up being a really useful feature was the Smart Switch’s Tasks. I scheduled the lamp to turn on around the time I usually arrive home and shut off when I’m supposed to be in bed, then set it up to repeat every weekday. There’s nothing like being suddenly left in the dark to tell you it’s bedtime.

These smart capabilities are enhanced by iSmartAlarm’s compatibly with IF This Then That; I especially liked the recipe that disarmed the alarm based on my location, turning it off when I got close to home. If you have other smart-home stuff you’d like to connect to the system, you’ll have to use IFTTT. Right now, the CubeOne isn’t much a hub, as it doesn’t talk to Zigbee or Z-Wave devices.

Smart Switch ($40)
Get an outlet for your smart home obsession with the Smart Switch.

When you have the system armed and something triggers an alarm, iSmartAlarm wants to be sure you know about. I got a phone call, text message, and email all alerting me to the situation. Since the system is DIY, it’s reassuring to know that it’d be hard to miss the series of notifications, provided your phone is on you. The prerecorded call told me to open app for more instructions, call the police if I deemed it necessary, and not to go home until I was sure it was safe.

Unfortunately, the “intruder” also happens to live in my apartment, didn’t have the iSmartAlarm app installed, and chose to deal with the incredibly loud alarm by unplugging the machine. (That’s probably how a burglar would handle it, too.) Still, I got a nice video of the incident, which I’ll apparently have forever, since I can’t delete it.

The iSmartAlarm system works really well. Its sensors and camera are reliable, and you can feel pretty confident that should the worst happen, you’ll know about it. The automatic video recording, which is a very new feature, is a great addition, but iSmartAlarm really needs to push out an update that gives users more control over those clips.

Additionally, it took me a while to get the hang of the system and really feel comfortable navigating around the app. Still, once I got my preferences nailed down, the iSmartAlarm was a solid system that will only get stronger as it adds more functions, like the ability to sync it with more smart devices.