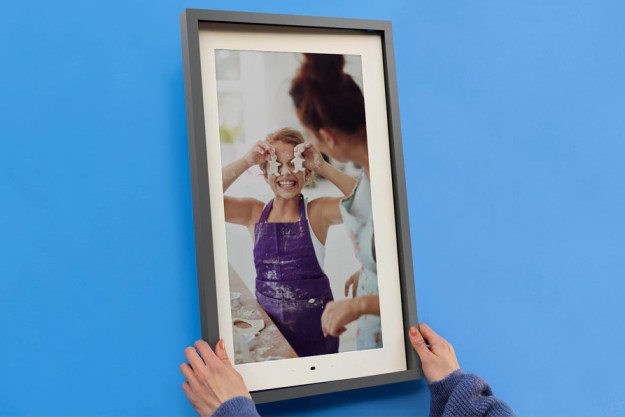 “No distractions here: The Lenovo Smart Frame is all about showcasing your favorite memories.”

Well, Lenovo feels that the photo frame, with the power and help of Google Photos, is worthy of being a stand-alone product again. Unlike other picture frames you’ve encountered, the Lenovo Smart Frame intends on making its presence known with its vast 15-by-24-inch digital canvas. Compared to today’s smart displays, it’s an undeniable Goliath.

I was excited for the first digital picture frame I bought sometime in the early 2000s, but looking back at it now, it was total garbage. Not only was it low res, but the colors bled through the sides and corners like no other. Naturally, you won’t have these worries with today’s digital photo frames.

Right out of the box, the Lenovo Smart Frame’s sheer size dwarfs the vast majority of digital photo frames in circulation. Whereas most are largely reserved for coffee tables, nightstands, side tables, and tight counters, the Lenovo Smart Frame yearns to be wall mounted — or at the very least deserves to be propped up on its own pedestal or shelf. That’s because of it’s sizable 21.5-inch IPS panel. Not only is it substantially larger than other picture frame displays, but its realistic look is enhanced by its anti-glare coating. When viewed straight on, it can be mistaken for an ordinary picture frame.

While its 1080p resolution handles decently from farther distances, upon closer inspection, I can notice less detail in the images. This is obviously expected, and it’s not a total distraction — just as long the original image was captured properly to begin with, it still turns out pleasing to the eye. Colors are well represented, too, and the viewing angles are superb and don’t distort at wide angles.

Google’s Ambient EQ technology makes its Nest Hub smart displays some of the best in producing lifelike results, but I have to admit that the matte finish of the Lenovo Smart Frame makes its display more realistic. Aside from the lack of a higher-resolution display, it does justice in showcasing photos.

Google Photos is a must

In order to get photos to show up on the Wi-Fi connected Lenovo Smart Frame, you’ll need to set up Google Photos — it’s mandatory and the only option. This is somewhat limiting, and I would’ve liked to see wider support for other picture services, like Shutterfly. However, since we’re dealing with Google Photos  here, it’s convenient that I can quickly populate an album to show off on the Lenovo Smart Frame by choosing familiar faces. (This works on pets too.) It beats having to manually go through all my albums.

On top of displaying my Google Photos, which can be done in chronological order or shuffled through the Lenovo Smart Frame app, you can set up other “channels” to display things besides photos. The only other options are the Art Gallery and Clock channels, which will display curated artwork and the time, respectively. With the latter, there are only a handful of clock widgets you can choose from, but I really wish it could show other meaningful information — like the weather and temperature.

Even though it’ll automatically scroll through photos, the Lenovo Smart Frame also has an integrated motion sensor that allows anyone to scroll through them and the various channels with ease. You’ll need to be patient with these hand gestures because, if you’re like me and want to scroll through a set in a hurry, it won’t be able to keep up.

There are two options for mounting the frame. I chose the simple way of standing it up against a wall with the power chord tucked behind it, but later on I used the included wall mount to properly attach it. While it’s still heavier than other frames at 8.26 pounds without the metallic frame attachment, you don’t need to find studs in the wall to wall mount it. Once it’s on the wall, you can easily remove it by pulling on the switches on the back of the unit. If you have younger kids who may be enticed by the power cord, it comes with a childproof clip so that the cord will easily detach from the unit.

Sticking to what it does best

We have high expectations of displays nowadays, especially when you consider how smart displays are the command centers of some homes. One may expect the Lenovo Smart Frame to do more, like playing videos, acting perhaps as a second screen of some sort, or even providing voice control using Google Assistant. There was also a point when I wished I could’ve casted a video I was watching on my smartphone. But you know what? It doesn’t do any of them. And who knows if it ever will.

That may be tough for some to swallow, but I understand Lenovo’s intention. The company already makes its own line of Google Assistant-powered smart displays (like the Lenovo Smart Display 7, which I love) so the Smart Frame’s purpose is solely that: A picture frame to delight you with some of your favorite memories.

What may also be tough for some people to accept is the $400 cost of the Lenovo Smart Frame. It’s well over what you’ll find elsewhere, including for fancy smart displays that double as frames for your photo memories, which top out at around $250.

Its size is undoubtedly its biggest asset. Few are ever as large as 10 inches, so it’s a picture frame worthy of being mounted in a high-traffic area in your home, to be seen by family members and visitors. Plus, its Google Photos integration takes away the hassle of organizing and offloading your favorite memories to a picture frame.

Constructed primarily out of plastic, the Lenovo Smart Frame is solidly built. Since it’s on the heavy side, you’ll want to pay particular attention to where you place it if you don’t intend on wall mounting it. It comes with a one-year limited warranty.

As I mentioned, smart displays like the Google Nest Hub are actually better investments since they double as picture frames. Therefore, if you’re looking to fill smaller spaces, they’re the better option. Conversely, you won’t find many picture frames larger than 10 inches, so this is one of the few options to consider — especially above 20 inches.

Yes, for its showcase style in being a proper photo frame that’s easy to manage thanks to Google Photos.