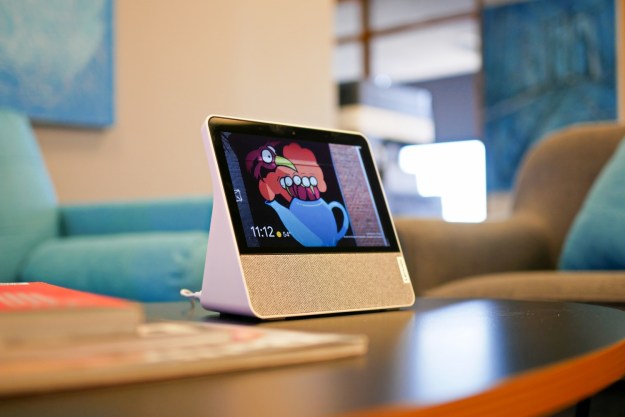 “The Lenovo Smart Display 7 packs a lot of features at an attractive price.”

Lenovo is no stranger when it comes to the smart home, having already released two smart displays powered by Google Assistant in 2019. They’ve been largely overshadowed by what Google has been doing with its own smart displays, however, not to mention Amazon’s robust lineup of Alexa-enabled devices.

New to the fold is the Lenovo Smart Display 7, which is now technically the smallest and most compact smart display in Lenovo’s portfolio. What’s sweet about it is the $100 price tag, which makes it an attractive offering and gives one of its direct competitors, the Google Nest Hub, a run for its money.

Sized to fit your nightstand

Unlike the previous two smart displays Lenovo put out — which essentially looked the same but were sized differently — the Smart Display 7 slightly deviates with a design that’s more likable in many ways. For one, the compact size is suited for nightstands, side tables, or just about any place with limited real-estate. It certainly appears more proportioned in these areas, than say, the 10-inch model that Lenovo continues to sell.

But now, it’s rocking a more contemporary design that instantly reminds me of Google’s latest smart displays. Perhaps it’s the tough plastic casing combined with the fabric mesh over the speaker that makes it look as though it takes cues from the Google Nest Hub. But that’s not a bad thing, namely because the style choice complements decor around the home.

I’m okay that the design is now static, too, meaning it no longer utilizes both portrait and landscape orientation. I honestly never interacted with either of the two previous models while in portrait mode, so having it confined to landscape is perfectly fine with me.

All the basics covered

As far as experience goes, there’s nothing particularly distinctive that separates the Lenovo Smart Display 7 from the company’s existing 8- and 10-inch models. In fact, it’s the same with the exception that you’re now dealing with a smaller, 7-inch 1,024 x 600 IPS display.

It’s the same size and resolution as the Nest Hub, which makes it crisp and easy to read, but there’s a little bit of distortion at wide viewing angles. It does feature an RGB light sensor that adjusts the display’s color temperature to match the ambient lighting conditions — similar to the Nest Hub’s Ambient EQ sensor — but it doesn’t achieve the same photo-realistic results that make the Nest Hub’s display remarkable in the space.

Beyond that, the core experience mirrors what we get in other Google Assistant-powered smart displays. If you’ve tried out Lenovo’s other smart displays, or perhaps the two in the Google Nest portfolio, you’re getting the same fundamental experience.

You can ask Google Assistant questions, set routines, control other smart devices in your home, and watch YouTube clips at your leisure. You can even place video calls courtesy of Google Duo using its 2-megapixel camera. And for those concerned about privacy, there’s a physical mute switch for the microphone and a TrueBlock shutter that covers the camera.

Unlike Google’s Nest Hub Max, which also packs a camera for video calls, you can’t leverage the Lenovo Smart Display 7’s camera to act as a security monitoring system for your home while you’re away. This, of course, is so far exclusive to the Google Nest Hub Max. Then again, the similar-sized Nest Hub doesn’t pack a camera at all, so Lenovo’s offering does offer more value in this regard.

A typical compromise made with smart displays in this size range is that they tend to be underpowered in the sound department, and to no surprise, the Lenovo Smart Display 7 is no different. Armed with two front-facing, 5-watt speakers that are positioned beneath the display, it does a better job of projecting sounds, but the audio simply lacks depth and often sounds muted in most instances. You won’t hear heart-pounding beats, nor is there enough definition in the mids and highs to make them pronounced enough at higher volumes.

While it doesn’t bring anything new to the table, the Lenovo Smart Display 7 does have everything you’d want in a smart display. It’s made more attractive given the $100 sticker price, and I do appreciate the slight change in design language.

It’s a better value than the comparable Google Nest Hub, especially when you have a camera for video calls at your disposal. If you’re willing to spend more, though, the Google Nest Hub Max is the supreme smart display in the space, boasting a larger, more attractive display, superior audio performance, and the ability to act as a home security camera. Now, if you prefer Alexa over Google Assistant, then consider the Amazon Echo Show 8 at $130.

Quite a while, unless an internal component for some unfortunate reason goes bad. In the event of that happening, there’s a 1-year warranty that covers parts and labor due to manufacturer’s defects. Software updates will also bring new features, which in turn will broaden its functionality.

Yes. It’s the most affordable Google Assistant smart display on the market with a camera for video calls, and the compromises it makes to reach that price are acceptable.