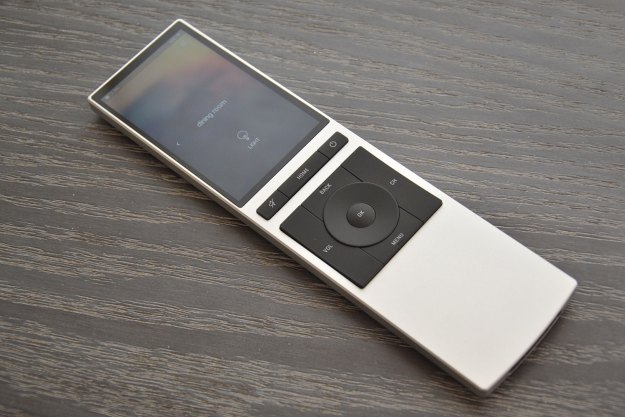 “The Neeo is smarter than your average universal remote, but understanding it requires homework.”

We’ve long bemoaned how a lot of smart-home devices are ugly. That’s why it was nice to get our hands on the Neeo smart remote. It’s a genuinely good-looking piece of tech, as are its many accessories.

The Neeo showed up on our radar as a Kickstarter project more than three years ago. It definitely didn’t meet its intended shipping goal (March 2015 for early-bird backers), but it’s finally available. Here’s how it stacks up when it comes to expectation versus reality.

The Neeo and its “Brain” (hub) are pretty. Not much seems to have changed here between the initial video and the actual product. The remote is just over seven inches long and nearly two inches wide. It’s fairly thin at 0.36 inches. The three-inch LED touchscreen has a 480-by-800-pixel resolution and is supposed to be fingerprint-resistant. However, if your Neeo is found at a crime scene, they’d probably be able to CSI it pretty well.

The round hub is 4.1 inches in diameter and just under an inch tall, so it should have no problem resting under a lot of TVs. It has a small white LED that glows constantly unless it’s in pairing mode. On top, there’s a pairing button. Both the Brain and the remote share a black-and-silver combo. The black cords, including the one for the IR extender bundled with it, are wrapped in nylon. The final accessory is the remote’s charter, which is a disc just a little wider than the remote itself. It has a small footprint, but it’s surprisingly heavy. The screen’s background is an out-of-focus swirl of pinks, yellows, and blues.

Expectation versus reality: What it controls

Out of the box, the Neeo was supposed to come with Wi-Fi, Bluetooth, Thread, ZigBee, and Z-Wave compatibility. Neeo claimed it would work with more than 30,000 devices, including Sonos speakers, Apple TV, Roku, and Philips Hue lightbulbs. With its infrared technology, it boasted control of 55,000 TVs and 19,000 DVD players, as well as cable and satellite boxes. We have a Roku 3600x streaming stick, which the app said Neeo supports. We went through all the steps and couldn’t get the Neeo to actually communicate with it. The interface showed up on the remote, but it wouldn’t actually navigate through the menu.

Once you make a change in the app, the remote will auto-update.

Upon delivery, it seems like the Neeo hits most of those promised targets — though its Thread and ZigBee capabilities don’t seem to be active yet. You can use the remote to control speakers such as the Sonos One and Sonos Play:5. It works with some Honeywell thermostats, but Nest and Ecobee don’t seem to be on the list yet. We got our Lifx and Philips Hue lightbulbs working, but we were out of luck for our Nanoleaf Aurora panels. We found our DirecTV box with no trouble, but our TV is apparently too dumb for Neeo (and every remote in existence).

The Neeo has a workaround for non-connected devices, but because we lost the original remote to the TV, we couldn’t successfully complete the setup. The remote thinks it’s turning the TV on, but it doesn’t.

Much like its most direct competitor, the Logitech Harmony Elite remote, the Neeo is supposed to give you a single controller for your entire smart home. In addition to just being able to use a remote to turn off your lights, these devices’ hubs mean you should be able to set up scenes and If This Then That-style recipes that trigger automatically in certain scenarios. For example, if you host movie night every Friday and want your TV to come on, your Apple TV to start Netflix, and your smart light bulbs to dim, you should be able to set this up once and have it reliably activate once a week at 8 p.m.

There are ways to set up routines in the Neeo app. Yes, the app. From the initial setup, to adding devices, to creating these rules, the heavy lifting happens in the Neeo app. As for the recipes, setup is pretty standard — you can set schedules, apply conditions (only if the motion sensor is activated or kitchen light is on), and receive email alerts (if something triggers the sensor between 9 a.m. and 5 p.m., for example). The good news is that once you do something on the app, the remote will auto-update when you pick it up to use it.

But these recipes are only as good as the ingredients. You wouldn’t be able to set your Nest thermostat as part of a “good night” scenario, because it’s not supported. Even devices that do work with Neeo don’t necessarily have full support. You can’t change the color of Hue or Lifx bulbs from either the app or the remote at the moment. Neeo isn’t the first to have this problem; it took Amazon a very long time to get Alexa the ability to change these bulbs from white to blue or purple. But this is a problem Neeo’s been working on for at least five months.

Speaking of Alexa, Amazon Echo and Google Home compatibility are still MIA at the moment.

Expectation versus reality: It’s a remote

Setting aside its smart-home control, the Neeo is first and foremost a TV remote. It has buttons in addition to its touchscreen, including OK, back, menu, volume, channel, mute, home, and power. We lost the original remote to our garbage TV awhile back, and none of the three replacements we’ve bought from various websites have worked. So we weren’t surprised when the Neeo didn’t either. But it did do just fine with the DirecTV, especially when it comes to those buttons. There does feel like there’s a bit of a lag when scrolling through the channel menu, but it’s pretty negligible.

It’s great that the team seems responsive to issues, but we wish there were fewer issues to begin with.

Sadly, one of our favorite features is hit or miss. Via the app, you can add a bunch of your favorite channels to the cable or satellite box screen. You’ll have to have your provider’s channel list handy, as it doesn’t automatically fill it in for you. Once you’ve done so, you can navigate to the screen (it takes us two taps, one for the room icon and another for the DirecTV button) and be greeted with logos for Investigation Discovery, USA, Oxygen, or wherever else you watch crime shows. Pressing the button ideally switches stations for you — except when it doesn’t. For example, Comedy Central’s number is 249 on DirecTV, but the Neeo never took us to the channel. It would give up after inputting two digits and say the channel — 24 or 29 — didn’t exist. It reliably surfed over to Bravo, though, so Neeo clearly loves The Real Housewives.

It seems other users had the same issue with Samsung and other TVs, and after posting on the community page, the Neeo team (which seems pretty responsive) fixed the issue. That’s a bit of an onus to put on the average person who just wants to watch cowboy robots in an amusement park where nothing “could possibli go wrong”.

To get noticed on Kickstarter or Indiegogo, products usually have to offer a little something extra to set them apart from the competition. In addition to its sleek design, Neeo promised some unique and useful features. Unfortunately, they’re not ready at the moment. The “handprint recognition” was supposed to let you set up profiles, so the remote would automatically recognize who was holding it. Then you could restrict each person’s access, so your tween couldn’t watch HBO. While the sensors are there, it’s still under development.

The same goes for the SOS alert, which was supposed to make the remote beep until you found it under the dog bed. Some Rokus have this, and it should just be true of every remote ever. That feature’s ETA is also TBD. Finally, the battery life was listed as lasting “months” on the Kickstarter page. That may be true – if you never touch it. We used the remote off and on for about six hours of testing one day, and the battery went from 100 percent to 88 percent. Then we left it alone overnight, and came back to it at 88 percent. We’ve seen some comments in the Neeo community page that battery life has improved with some updates.

The odd thing is that Neeo still touts these features on its product page, without warning that they’re still in development. We had to really dig to confirm some of these features aren’t yet ready to go.

Neeo offers a two-year warranty on its remote.

The $369 Neeo is beautiful, but its brains don’t match. Though it’s been a three-year-long wait for Kickstarter backers, most have only had theirs for a few months now. Hopefully Neeo can deliver some updates to make the remote more universally appealing.

While there are lots of universal remotes, there aren’t many that also do smart-home control. The $350 Logitech Harmony Elite does. Its design probably won’t turn your head, but it does work with a fair amount of devices, including Nest thermostats, Lutron Caséta switches, Amazon Alexa, and Google Home.

The two-year warranty is nice, though the big glass screen does make us worry. With any crowd-funded smart-home project, it’s always a worry that the company could go under and brick your device.

If you don’t mind hunting down answers to your questions or problems via community sites or blog posts, then you might think some of Neeo’s headaches are quirks rather than deal breakers. If you have zero patience for trying to set something up more than once, there are probably too many kinks for you to bother with.