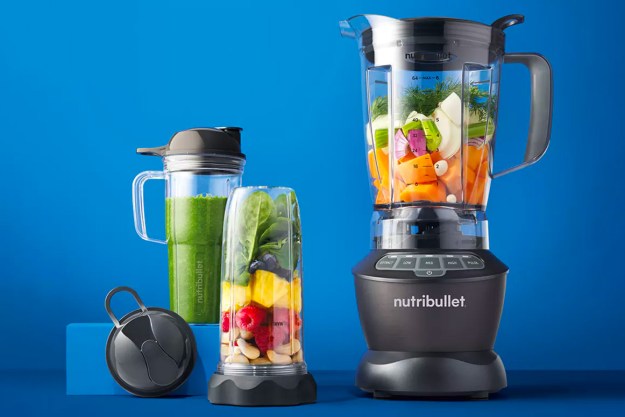 “Just as advertised, the Extract button made a great smoothie.”

NutriBullet is looking to leave behind its past as an “As Seen on TV” product and trying to become a health-conscious lifestyle brand. As part of the rebranding, it has introduced its first full-size blender, the NutriBullet Blender Combo ($140). The company is positioning the new blender as a rival for top-of-the-line blenders, like those from Vitamix, at a much lower price point.

The Magic Bullet NutriBullet is our favorite personal blender, but we wondered how its big brother would stand up to some of the other big competitors in the blender market. So, we put it through some rigorous testing to see exactly how well the NutriBullet Blender Combo compares.

The NutriBullet Blender Combo’s wide base occupies the same space as a regular blender, and then some since it has two cups, one for 32-ounce single servings and another 64-ounce. pitcher. I know you can’t really hold that against it since it’s a 2-in-1 product, but it’s something to consider if you have limited room.

The modern, stainless steel body looks a lot like more expensive blenders on the market, and is heavy. The heft is a good feature because lighter bases tend to be unstable and bounce around during heavy-duty jobs. It also has suction cups on the bottom to keep it firmly attached to the counter, no matter how wild the blending action becomes.

The buttons are low-profile, almost flush with the base’s surface, which means cleaning up spills is a cinch. No need to break out the cotton swabs to coax food bits from nooks and crannies on the control panel.

The modern, stainless steel body looks a lot like more expensive blenders on the market, and is pretty heavy.

The controls are also easy to use right out of the box. Unlike the BlendTec Designer 725, which has 100 different speed settings, the Combo only has five. For most people, extract, low, high, medium, and pulse are all you’re going to need anyway.

A few other nifty features make it stand out from the crowd. One of the first features you may notice is the Extract button. This programmed button is used to take smoothie ingredients, including whole fruit and ice cubes, and turn them into a smoothie with just one touch. When it’s done with the smoothie making, it turns off automatically.

While the NutriBullet Blender Combo seems to center around smoothie making, with its mini blender cup and Extract button, it doesn’t forget about hot foods. The full-size blender vessel includes a vented lid that allows you to blend piping-hot foods. The lid is particularly exciting for me, since I blend hot soups more than anything else in my kitchen. Just be sure not to try this trick with the smaller single-serve blender cup.

The-1200 watt motor base is a big step up from the Magic Bullet NutriBullet’s 600-watt motor, but it still falls short when compared to our favorite full-size blenders, which have 1,500- to 1,725-watt motors.

Just as advertised, it can produce a pretty darn good smoothie with its Extract programming function.

Since the NutriBullet Blender Combo has a button especially for making smoothies, that’s the first thing I tested. Just as advertised, the Extract button took the machine through a series of speeds and produced a pretty darn good smoothie.  The ice was finely chopped and the pitted peach I threw in was blended down nicely. There were no peel chunks in the smoothie, which can be an issue with other blenders.

Next, I tried a hot food. Hot potato chunks and liquid blended into a super smooth potato soup. The only issue is the blender jumped around a lot, even with the suction cups stuck to my counter.

While it works great, its can be ear-splittingly loud.

While it works great, I can’t help but notice how ear-splittingly loud it sounds. I thought that the suction cups would help to dampen some of the noise, but no luck. If that’s a concern for you, then you may want to go with the Breville Super Q Blender, which is our pick for the quietest blender.

Overall, the NutriBullet Blender Combo is a great choice for smoothie enthusiasts and home cooks alike, so don’t be afraid to buy this one. The ease of use, modern design, and low price point makes it a good choice for those seeking a quality machine on a budget.

The Combo’s sturdy design seems to suggest that it will go the distance, even though it only has a 1-year warranty.

Yes. Though not as powerful as some of its competitors, the NutriBullet Blender Combo works well enough for most people’s needs, especially if you want to make a killer smoothie. If you want more power and less noise, go with the Breville Super Q Blender.