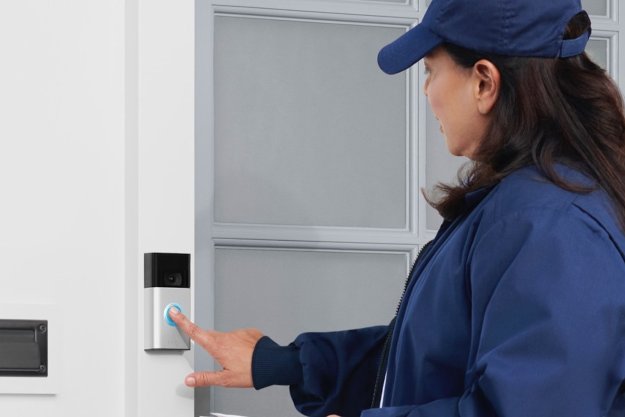 “The cheapest Ring isn't a revelation, but its price is.”

What sets it apart from all of its cousins? Its $100 price tag. It’s by far the cheapest Ring doorbell introduced this year — the Ring Video Doorbell 3 and 3 Plus are priced at $200 and $230 respectively. That’s a huge difference. Is it worthy of the premium Ring brand? I gave the 2nd Gen a try to see how it compares to its competition and the other Ring doorbells.

Like the other Ring Video Doorbells, the 2nd Gen is very easy to install. The instructions in the app guide you through everything, step-by-step. The kit even comes with a level, screwdriver, and a drill bit, if you need to use a drill. All you need to do is attach the mounting plate to the wall or door frame with a few screws, click the doorbell onto the plate, then secure everything with two more screws. It takes around 30 minutes in all to install it wirelessly. If you’re replacing another wired doorbell, it won’t take much longer to install since it connects with the wires that are already there. However, if you want it to be wired, but you don’t currently have a wired doorbell, you’ll need to call in a professional to make the installation happen.

Still no easy way to recharge

The very first thing I noticed is how difficult it is to charge this new model. The other new video doorbells in Ring’s line have a faceplate that pops off, which allows you to remove the battery to charge them. The Ring Video Doorbell (2nd Gen) doesn’t have a removable battery. The whole doorbell needs to be completely removed from the mounting plate because the charging port is on the back of the doorbell, which is the same method used by the first-generation Ring Video Doorbell. That means you’ll need to unscrew two security screws, just to be able to recharge the doorbell. What a pain! Also, while the doorbell is charging, you have an ugly mounting plate beside your door instead of a doorbell.

Besides having to pluck the doorbell from the faceplate and charge it inside, the battery isn’t that bad. Like the other Ring doorbells, it should only need recharging every few months. Overall, it uses about 1% of its battery life each day.

The Ring Video Doorbell (2nd Gen) has a 1080p HD camera, just like the Ring Doorbell 2, Ring Doorbell 3, and Ring Doorbell 3 Plus. It’s leaps and bounds better than the 1st Gen, though, which had a 720p HD camera. Even more surprising, this 2nd Gen model has more color saturation and better contrast, maybe a little too much contrast, and that’s despite having the same video specs as the 3 Plus.

The fish bowl curvature around the edges of the video seems to be slightly less obvious.

Also, the fish bowl curvature around the edges of the video seems to be slightly less obvious. As I’ve said in other Ring doorbell reviews, curvature distortion is a problem that should have already been solved. The Arlo Video Doorbell, among others, figured out how to create a doorbell without edge distortion. Why is Ring sleeping on making this upgrade?

The 2nd Gen has night vision like its brand buddies, too. It’s comparable to other doorbells with night vision, but far from amazing. The contrast is good and faces are fairly recognizable. When it’s really dark outside, the camera switches to black-and-white footage, but as long as your porch light is on, it still records in color.

The field of view (how much area the camera can “see”) is slightly narrower than other Ring doorbells. The Ring Video Doorbell (2nd Gen) has a field of view of 155 degrees, while the 3 Plus is slightly wider 160 degrees. Frankly, this didn’t seem to make much of a difference when comparing footage side by side. The original model has a 180-degree field of view, so I’m a little confused. You’d expect that the 2nd Gen would be an upgrade, not a downgrade.

While you can see live video for free, you’ll need a subscription to store your videos. The Ring Protect Plan lets you review and share videos and photos for up to 60 days. It only costs $3 per month per device or $10 per month for your whole household, so it isn’t terribly costly. It’s comparable to other plans like Nest Aware for the Google Nest Hello, but other companies, like August, offers free video storage for their doorbells.

Two-way audio is a feature found across the Ring line of video doorbells. It allows you to talk to whoever is at your door without having to open it, or even be at home. The noise cancellation technology really helps to dampen surrounding noise, so you can clearly hear the person speaking. The audio is very loud, too. The only problem is that it cuts in and out through the mic and the speaker, so the sound on both sides of the conversation is a bit choppy.

The Ring Video Doorbell (2nd Gen) has most of the same features as all of the other Ring doorbells, primarily because they all use the same app. One thing it doesn’t have is the pre-roll option that enables the camera to take a four-second preview video before a movement alert, which is exclusively available with the Ring Video Doorbell 3 Plus. It’s helpful when you need more footage to, say, identify someone on video, but it’s not a huge loss.

Many Ring competitors leverage artificial intelligence to detect and alert you when there is a package on your porch, but Ring doesn’t offer it on a single model. Maybe I’m just overestimating what a great feature that is. I think it’s quite helpful, but maybe Ring doesn’t. It’s artificial intelligence that can tell the difference between a human, animals, or cars,  so movement notifications become more accurate.

There is a Privacy Zone option that will literally block out a part of the yard in the video.

I say this a lot in my reviews, but I’ll say it again. I love the Ring app. It isn’t glitchy and it’s easy to use. Even better, it sends you live crime and safety alerts that are being reported by your neighbors or local law enforcement, as well as weekly safety reports. This is the only doorbell app that has all of that. In fact, the app is one of Ring’s biggest selling points.

It really seems like Ring is just churning out video doorbells without much innovation at all. The Ring Video Doorbell (2nd Gen) is almost indistinguishable from their other new video doorbells, except it doesn’t have a removable battery or 5.0 GHz Wi-Fi connectivity option, and has a slightly narrower field of view. The thing that sets it apart is the price. The Ring Video Doorbell 3 costs $200, while this 2nd Gen model costs $100. That’s a big incentive.

For better video quality, I’d recommend the Arlo Video Doorbell or another choice on our best video doorbells list. Still, Ring does have the best app on the market, and if you have other Ring products, I definitely recommend the Gen 2.

Because this doorbell is one solid piece without a removable faceplate, it seems like it may be more durable than other Ring Doorbells. It comes with a one-year limited warranty and if it gets stolen, Ring will replace it for free.

Yes. It is actually a decent doorbell for the price. Plus you get the great Ring app.