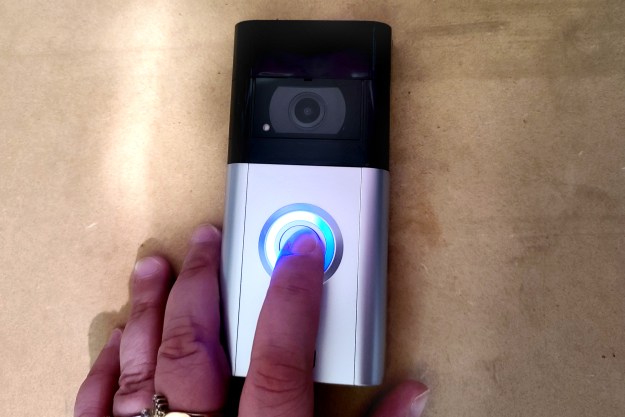 “I wanted to be excited about the third-gen Ring Video Doorbell, but it didn't wow like it should.”

The Ring Video Doorbell 2 was such a big hit that it made our list of the top video doorbells of 2020. So, you can bet that when the Ring Video Doorbell 3came out, there were high expectations. Did the third-generation model ring in some exciting new features? Here’s what I found out when I gave it a try.

Like with most wireless video doorbells, the installation of the Ring Video Doorbell is a snap. All you need to do is screw the mounting bracket to your door frame, pop in the battery, and attach the doorbell to the mounting bracket. The guide on the app shows you step-by-step directions on how to set everything up, including connecting the new doorbell to your home’s Wi-Fi network (2.4GHz or 5GHz).

Once it’s installed, you can use the app to connect the doorbell to other Ring products in your home, like Ring’s other indoor/outdoor cameras, smart light bulbs, path and step lights, and the Ring Solar Floodlight. After everything is connected, you can create tasks so the devices work together. For example, when someone rings the doorbell, you can have your porch light or other lights automatically come on.

If you want to hardwire the Ring Video Doorbell 3, that’s pretty simple too, as the app walks you through it. Just be sure you have a connection that’s 8-24 VAC and 40VA max, as well as a 50/60Hz doorbell transformer. If you don’t, or you don’t know what any of that means, you may need to bring in a professional installer.

When it comes to design, you’ll immediately notice that the third-generation device is a bit of a chunk when it comes to video doorbells. The Ring Video Doorbell 3 measures in at 5.1-inches tall by 2.4-inches wide and really protrudes from your door frame (or wherever you install it), sticking out like a sore thumb. Choosing a slimmer doorbell, like the Nest Hello, Arlo Video Doorbell, or perhaps even the older Ring Pro makes less of a visual impact, for sure. The faceplate comes in two colors, silver and black, so you have a little choice over how it impacts your front door’s atheistic.

A major design improvement over the last Ring Video Doorbell is that the company made it easier to take the front faceplate off so you can access the battery. This may seem small, but nobody wants to struggle with their doorbell just so they can charge the battery. It just clicks on and off with a little squeeze. Once the cover is off, you pull out the battery and charge it using a USB cable that comes with the doorbell.

The chime in the Ring Video Doorbell 3 isn’t very loud. It sends notifications to your phone, but if you’re not carrying your phone around with you, you may miss hearing it. Pairing the Ring 3 with the Ring Chime, at just $30, is a good way to fix the problem. The Ring Chime is a separate device that you plug inside your home to a wall outlet. From there, you pair it to the doorbell. When the button on the doorbell is pushed, the Ring Chime will chime as well. It is loud and has a variety of chimes you can choose from on the app, including special holiday chimes.

When it comes to video quality, there haven’t been any improvements since the second generation. This third gen model still has a 160-degree field of view at 1080p HD, which is what you’d expect with video doorbells, so no complaints there. The video is really clear when objects are just a few feet from the camera;  further away, things get a bit blurry. The colors are a bit muted, but it handles recording images well. There is some pixelation if the object the camera is focusing on moves quickly, but it tends to clear up quickly.

There’s still a curvature around the edges of the video, though. I’m not sure why Ring didn’t think it was important to fix this since other video doorbells, like the Arlo, don’t have the fishbowl problem. The field of view is also a bit narrow vertically, so you can’t see the floor of the porch by the door, where packages may be placed by a delivery person.

Its night vision is in black and white, which isn’t unusual for a wireless video doorbell. If you hardwire the Ring Video Doorbell 3, though, the video is in color, so that’s something to consider.

Like its predecessor, the Ring Video Doorbell 3 doesn’t have local video storage. You’ll need to subscribe to Ring Protect. It starts at $3 per month or $30 per year for video and photo storage, so it’s not too costly. Other video doorbell brands offer storage plans similar to Ring Protect for around the same cost, but August, for example, offers its users free video storage.

Clear audio is always a good thing, especially when there are strangers at the door.

The two-way audio on the Ring Video Doorbell 3 is really nice and clear. This is probably due to its noise-cancellation technology. It’s intended to make voices stand out above outdoor noise and does a good job of it. Clear audio is always a good thing, especially when there are strangers at the door.

There’s one new feature that is an upgrade from the Ring Video Doorbell 2. The near-zone feature allows you to customize just how near or far away the motion sensor will detect movement. This prevents your notifications from going off constantly if you have a sidewalk or street close to your front door, for example. You can adjust the range from 5 to 15 feet to meet your needs.

It doesn’t have box detection like some other video doorbells, including the Nest Hello.

The snooze and sensitivity features also help decrease the number of alerts. Through the app, you can set notifications to snooze for 30 minutes to four hours. You can also turn down the motion detector’s sensitivity so that it will only send a notification if something large, like a human, is lurking around. Or you can just set it to People Only mode so it detects humans exclusively. It doesn’t have box detection like some other video doorbells, including the Nest Hello.

If you get completely tired of notifications, an even better option is to turn on Home Mode. You can it to prevent the doorbell from detecting motion at all, but it is customizable. You can decide to have the doorbell continue to detect motion and use live view if you want.

Like the second-gen device, this new one can be connected to Alexa. This allows you to see visitors on Alexa video devices, like the Echo Show 8. You can also use any Alexa Echo device to talk to visitors that come to your door. An upgrade that would have made sense is the addition of Google Assistant capabilities, but that’s an unlikely prospect.

The app is the best feature of any Ring video doorbell, in my opinion. It has so many features and is so few glitches that it’s a joy to use when compared to other smart device apps. My favorite feature is the real-time crime and safety alerts. You can also see current crime activity on a map of your neighborhood, weekly safety reports, and more on the app. These tools allow you to always know what’s going on in your neighborhood, which makes me feel safer.

Ring doesn’t specify exactly what the battery life is like. However, I’ve found that it’s more likely that you’ll be charging it every 3 months or so, depending on how often it’s used. It seems to use a little over 1% of battery life per day. If you don’t like that idea, you can get a solar charger that’s installed right behind the doorbell for $50. The solar attachment connection is a new option that the second-generation Ring didn’t have.

There are three privacy features included with the Ring Video Doorbell 3 that are worth noting. After getting called out for several of its video cameras getting hacked, Ring made two-factor authentication on its app and website mandatory. This is a great way to make sure your footage stays safe and it’s a feature that many smart devices overlook. Another smart privacy feature is the ability to turn off the camera’s mic if you don’t want it recording.

You can also prevent the camera from “seeing” certain parts of your yard by setting up privacy zones in the app. Wherever you put a privacy zone, that area of your yard will show up as a black box on the video.

While we love Ring Video Doorbells for ease of use and its great app, the third generation seems to be lacking a bit — especially when you look at what else is out there. While it’s a great doorbell, it really doesn’t have any major advantages over the Ring Video Doorbell 2. If you already have a Ring Doorbell 2 and are thinking of an upgrade, you might as well just stick with what you have. Otherwise, the Arlo Video Doorbell is a better upgrade.

Yes. At $200, it’s a little more pricey than most other top-performing video doorbells on the market, like Arlo’s Video Doorbell ($149), which has better video. Maybe the only thing that would make it worth the extra expense is that the Ring app is the best out there, but if you’re going that route, you might as well get the Ring Doorbell 3 Plus for $230. The Plus has an extra feature called Pre-Roll that lets you see an extra four seconds of video footage before a motion event is detected by the doorbell.

The Ring Video Doorbell is made of thin plastic that doesn’t seem like it would hold up for more than a year or two. It is rain-resistant, though, and the battery will last in temperatures between -5 to 120 degrees Fahrenheit (-20 to 50 degrees Celsius). It also comes with a one-year limited warranty, and Ring will replace it for free if it is stolen.

No. If you want a better Ring experience, I would say spring for the Ring Doorbell 3 Plus. If you’re on a budget, get the new Ring Doorbell (2020) for $100 less. If the Ring app and ecosystem fail to sway you, go with the Arlo Video Doorbell.