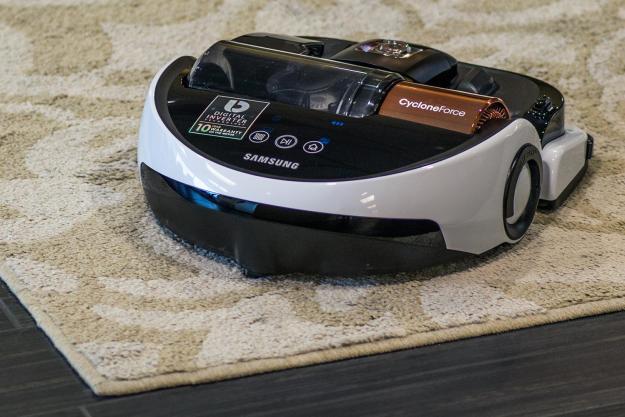 “Which do you prefer: Having spotless floors or having a robot vacuum for you? Because you can’t have both.”

A few years ago, the name Roomba was synonymous with robot vacuums. A few contenders have come onto the scene to challenge iRobot’s supremacy, most recently the Samsung POWERbot VR9000. It looks different from the competition and has some standout features. It’s $999 price tag means you probably want the bot to handle the majority of your cleaning for you, but you still might have to muck out your rooms’ corners.

Inside the box, there are a few more bits and pieces than with many other robot vacuums. You get the unit itself, a docking station, a remote, and a cleaning brush, as well as an optional virtual guard. The vac is pretty much ready to start cleaning once you’ve charged it up, but you’ll want the remote handy.

Unlike the round Roomba, the POWERbot looks a bit like Samsung lopped the top off an upright vacuum, leaving nothing but the base. It has an LED screen that illuminates blue, as well as a camera pointed at the ceiling to help scope out its surroundings and avoid collisions. A tubular dustbin protrudes a bit from the top.

The vacuum is just over five inches tall, and while it managed to get under all our furniture, that height is something to keep in mind. Plus its design makes it a little less likely that any cats will climb aboard, as one Digital Trends staffer pointed out to me. One strange thing I found about the dustbin is that the vacuum still operates without it in place – you wouldn’t want to, of course, but it will. When I tested this out, the vac flung the little bits of rice it was sucking up into the air from its empty cavity.

Underneath the black-and-copper surface, there’s a brush and six wheels of varying sizes, allowing it to pivot relatively smoothly when it needs to get out of a tight spot. There’s also an emergency power switch you might have to toggle if you get an error code. Its 12.2-inch cleaning path is marginally larger than the Roomba 880’s 12-inch one, and its 0.7-liter (about 2.9 cups) dustbin is the same size as Neato’s Botvac.

Control in your hands, not on the bot

Yes, you could just hit the “auto” button and set the POWERbot to work, but you’d be missing out on some important features. There are four cleaning options on the vac itself: auto (cleans until it determines it’s done every inch), spot clean (covers that five-foot-by-five-foot mess you’ve made), max clean (depletes its battery covering all the territory it can), and manual clean (use the remote to annoy others choose where the bot cleans). Though it also has the same four buttons as the unit, you’ll really want the remote to harness all the bot’s features. It’s how you’ll schedule your cleaning times, silence the vacuum’s beeping, and direct it. It’s also how you’ll amp up the power, in both auto and manual mode, with the “dust sensor.”

The “point cleaning” feature is pretty handy that lets you drive the vacuum to a specific spot, unlike the spot clean, which charts its own path within a limited area. If you notice the POWERbot has missed a section or you just want to clean near the kitchen sink, you hold down the point-cleaning button and train the remote’s red target at the pile of fixings you dropped on the floor. If it’s in range, the little guy will come over and tidy up. Driving the robot with the remote control is actually quite fun and easy to get the hang of. The POWERbot was far more responsive to the controls than when I used the remote for the LCD screen; when I was programming the cleaning schedule, I kept missing my target time by over-pressing the buttons.

The POWERbot pulled flour, sand, and rice off our carpet pretty well. Our benchmark vacuum only managed to pick up a couple more grams each of rice and sand than the robot, though it did remove about 20 grams more flour. The POWERbot actually got helplessly confused when its sensors got covered in a layer of flour, resulting in the vacuum trying to climb the walls. Both vacuums left some debris behind on every test, and only picking up the carpet and shaking it removed the rest of the flour, rice, or sand.

Instead of careening off objects, the POWERbot slows down and gently nudges them in an exploratory fashion.

My cat is part Maine Coon, so he has hair to spare. How does the POWERbot fare against fur? I grabbed some and headed to work to find out. (I always fear getting murdered before I get to the office when I have a bag full of cat fur in my backpack; all I picture is a Detective Tutuola-type trying to figure out how the creepy tchotchke fits into my death.) Good news: The POWERbot had no trouble getting fur off the carpet or floor.

Cleaning a 16-by-20-foot room took 38 minutes, not including the three times it got stuck between one of the five chairs’ legs. Nearly 100 percent of the mix of gunk was in the dustbin by the time the bot was finished, though the edges of the wall and objects such as chairs definitely still had quite a few of the oats I had scattered left around them.

One of the most impressive things about the POWERbot is that it’s a gentle giant. Instead of careening off objects, it would slow down and gently nudge them in an exploratory fashion. It was rugged enough to run over flatter obstacles, and it could go from a cement floor to a mid-pile carpet without getting stuck. However, chair legs could thwart its sensors, and the bot would just shut down and refuse to move. Usually it could get back to its charging station to re-energize, though it would sometimes try pretty baffling routes first — like going in the opposite direction. Once, the little guy just looked so lost, I guided him back home with the help of the remote.

I let the POWERbot run around the same room four times to pick up a mix of debris, and the results were as mixed as the messy concoction. Twice it managed to pick up everything in sight; the other two times, it left patches of carpet unvacuumed. Surprisingly, one of these less-than-stellar results was the final time, so it’s not like the bot was just learning its way around at first.

When vacuuming is not enough.

Since there’s not yet a dusting robot, you’ll have to do the work

Its name says it all: Magic Eraser

The POWERbot is powerful, easy to use, and has some neat features. It’s good on both carpet and bare floors, picking up a good amount of debris and pet hair. It’s rugged enough to roll right over minor obstacles but gentle enough not to bang the hell out of your table legs. Still, it’s going to miss some spots, even when it’s being all it can be. If you set it and forget it, you could come home to a half-cleaned house and a tangled-up machine.

The thing is, none of these problems are unique to the POWERbot. No robot vac is proficient enough to get the crevices at gleaming and dirt-free as you can. Should you buy the Samsung POWERbot VR900? It just depends: How comfortable are you with not having perfectly spotless floors?