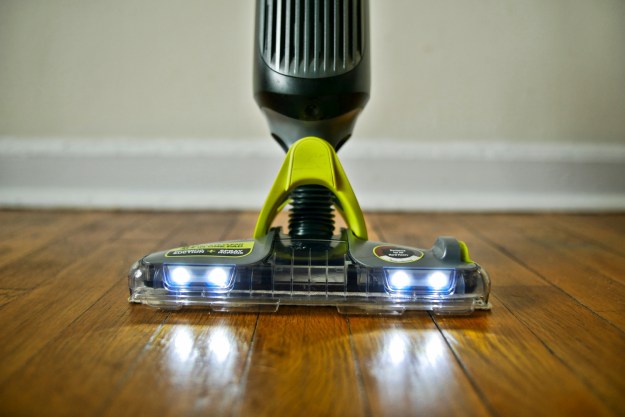 “The Shark Vacmop takes everything I love about the popular Swiffer Sweeper and adds suction power to better collect debris on floors.”

Shark’s robot vacuums are notable for striking a balance between performance and price. While there are plenty of options to choose from in its cordless vacuum line, only one stands out as being great for both scooping up debris from hard floors and mopping up spills.

The Shark Vacmop takes the Swiffer Sweeper approach by doubling as a dry sweeper and mop, saving you the hassle of needing two separate cleaners. You might be asking if there are any compromises with a 2-in-1 unit such as this one, so I put it through some good cleaning scenarios to find out.

From sweeper to mop

Arguably, the Shark Vacmop’s most compelling feature is its ability to sweep and then mop with minimal effort. With your traditional Swiffer Sweeper, you need to dispose of the dry pad and then replace it with a wet one to make the transition. There’s none of that here with the Vacmop, which makes it extra versatile when it comes to cleaning up different kinds of mess.

The disposable pad effectively is used for both the purpose of sweeping and mopping, since there’s a small nook that sucks up debris on the floor, then stows it all away in the pad itself. Suction power is decent for most tasks, but I was surprised by how it’s still able to suck up debris when the pad becomes wet while mopping. This convenience of sweeping and mopping simultaneously is something I really appreciate because it saves time.

However, there’s a little bit of resistance when pushing and pulling the five-pound Shark Vacmop. It doesn’t have the same degree of effortless movement as a Swiffer Sweeper. Sure, the head can be articulated in the same manner that a Swiffer can be pivoted to collect dirt and debris, but the resistance makes it a bit tougher to maneuver.

Similar to a Swiffer Sweeper, the Shark Vacmop requires you to buy disposable pads that need to be replaced once they’re dirty or filled with debris. Removing the pad is a cinch, which is achieved by pressing a button on the side of the head. The disposable pad unlatches from the unit, so all you really need to do is place it over a garbage can into which it can be dropped.

While this makes it super convenient, you have to remember that the Shark Vacmop won’t work without the disposable pad. You also have to keep in mind that there will be an ongoing cost associated with ownership of the Vacmop: It’s about $24 for a 30-count refill pack of disposable pads. By comparison, a 40-count refill pack of Swiffer Sweeper dry sweeping cloths fetches for around $13 — so you’re going to be paying significantly more for the Vacmop.

This convenience of sweeping and mopping simultaneously is something I really appreciate.

There’s also the liquid multisurface cleaner you’ll need to buy if you intend on mopping your hard floors. It’s $10 for a two-liter bottle, which then gets poured into the Vacmop. Since the device is battery-powered, the liquid multisurface cleaner is dispensed by pressing the button on the handle. I actually like how it driess up quickly on my hardwood floors, without leaving any streaks in the process. Although, it’s worth mentioning that it’s not a disinfecting solution. If you choose to use another solution, just know that you risk damaging the unit.

You can mitigate your out-of-pocket expense by limiting how often you clean — but don’t be fooled by focusing solely on the initial $100 cost.

If you have a large amount of space to sweep and mop, you’ll want to look for another solution because the Shark Vacmop tops out at 13 minutes of battery life. That’s really short, which means it’s best reserved for those on-the-spot messes. While it’s still possible to clean larger spaces, you’ll need to take breaks so you can recharge the Vacmop with the included magnetic charger.

I’ve been using the Shark Vacmop mainly after dinner to clean up any crumbs that collect on the floor. Since I’m sweeping and mopping the kitchen area for no more than five minutes, the short battery life isn’t a problem for me, but I can see how it can be a limiting factor for others.

Finally, I just want to point out that there are no other attachments included with the package — so don’t expect to find a crevice or brush tool.

Shark’s take on the Swiffer Sweeper is interesting. There’s no denying how it’s a Swiffer on steroids because of how it takes everything I love about the popular sweeper and adds suction power to better collect debris on floors — all while being able to switch into a mopper without having to remove the pad.

The $100 starting cost isn’t too bad, but bear in mind the added cost that will be incurred with the need to buy disposable pads and the multisurface cleaner.

Constructed from tough plastic materials, there’s a sturdy quality to the Vacmop. In fact, it has fallen over several times without any evidence of damage. In the event something internally goes bad due to a defect, there’s a one-year limited warranty.

The Dyson Omni-Glide stands out as the superior sweeper because of its lightweight construction, effortless movement, and stronger suction power. Sure, it’s considerably more expensive at $400, but that’s the only cash you’ll need to fork over for it.

Yes. It’s moderately priced and there are few models out there that can sweep and mop at the same time.