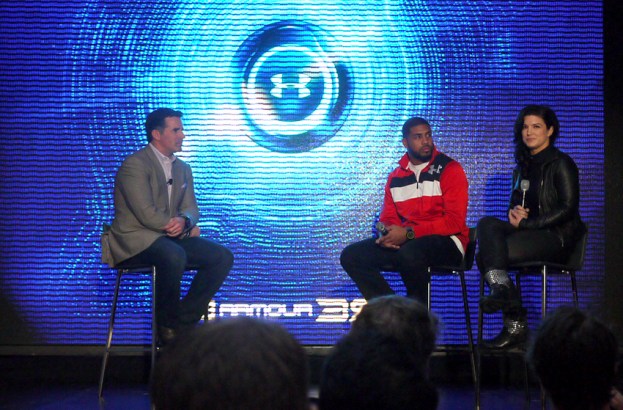 Check out our review of the Under Armour E39 fitness band.

Under Armour unveiled its entrant into the burgeoning fitness technology space on Tuesday. “Dubbed Armour 39,” it is both an ode to the company’s humble roots – 39 references the made up “style number” they attributed to the first shirt they ever made – as well as a pretty bold step into the platform manufacturing business. “Armour 39 is a big statement for us,” Plank said at the product’s unveiling in downtown Manhattan.

Our recent attraction towards workout monitors is the natural convergence of this whole Internet-of-things trend and the nation’s recently acquired taste for stat freaks like Billy Beane and Nate Silver. We want to be able measure things and we want those results conveniently in the cloud. The truth is in the numbers and yes, there’s an app for that.

While Jawbone and Fitbit both have interesting devices in this category, Armour 39 is going to be most directly compared to Nike’s FuelBand, which increasingly dominates the wrist space of joggers and gym rats. But while it would be unfair to call Nike’s product a gimmick, as a training device it falls somewhere between glorified motion detector and overpriced fashion accessory. Armour 39 is an entirely different beast. The former is best suited to soccer moms at pilates parties; the latter looks more like the exercise tool of Tony Stark.

The distinction is easily discerned from a quick visual inspection. While the FuelBand is a sleek bracelet, Armour 39 straps around your chest. The FuelBand basically measures how much it moves; Armour 39 uses consumer-level biometric technology developed by a company called Zephyr Technologies, which has already deployed a medical grade version of the tech with NASA, the Navy SEALs, and professional athletes. It can measure heart rate, speed, steps, and the overall intensity of a workout.

And while the hardware is impressive, “The genius is in the algorithms,” says Under Armour COO Kip Fulks.

That software generates another comparison to FuelBand, which eggs users on by assigning them vaguely-defined “fuel points” based on how much the wrist band senses it has moved over the course of a day. Under Armour has its own black box metric with fancy branding: WILLpower. The difference is in the end goal of each unit of measurement; it’s basically quantity over quality. Fuel points measure how much work you’ve done over all while WILLpower assigns a value on a scale of one to 10 of how hard you’ve worked.

How accurate this is remains to be seen. While Under Armour won’t divulge the parameters of their algorithms, they were quick to point out that WILLpower is based on the user’s individual athletic profile. So you’re being judged on whether or not you’re working out to your personal potential.

In other words, Under Armour is claiming to measure something never previously quantifiable with technology: heart. Are you working hard enough? Or are you simply going through the motions?

“You need a number,” Plank said. “For today, for tomorrow. It’s the first performance training tool that tells you everyday: How did you do? You can look at your heart rate, your calories burnt – but did you work? Did you get it done done?”

The company had a few of their professional endorsers on hand for the announcement, each of whom knows from serious workouts. “Sometimes you need that self realization,” says Houston Texans’ running back Arian Foster, “that reality check.”

“I really like the idea that someone can check in you,” said former MMA champion Gina Carano, who had been testing out the devices during her recent workouts. Now, there’s nowhere to hide.

Armour 39 is intended to be a full platform, with the hardware running increasingly sophisticated programs going forward. That might explain why they unveiled not just the chest strap, but also a wrist accessory that provides real-time monitoring. Considering that the watch costs more than the strap, and considering the strap uploads directly to the cloud and you can get real-time monitoring on an iOS or Android app on your phone, buying the accessory doesn’t make much sense.

Then again, Armour 39 isn’t really targeted at people who work out while checking their text messages.This is a serious device for serious fitness buffs who fully buy in to the “quantifiable self” philosophy that promises better living through analytics. You aren’t going to reach your daily fitness goals by waving this thing a few times around your head.

This compact, folding treadmill is on sale for $380 at Walmart today