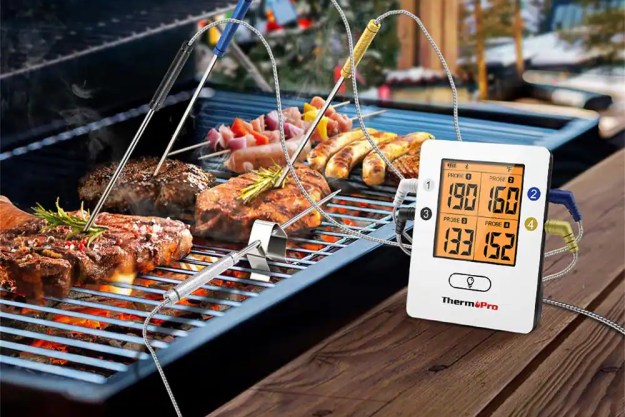 “The four probes are probably more than most people will use, but then again, you don't have to use all of them every time.”

Nothing says summer quite like grilling in the yard, on a large terrace, or at a campsite. There are many grills and BBQs loaded with smart tech to help you master this favorite summer pastime, but the one tool you really need to deliver perfectly cooked food is a meat thermometer. Sure, you can use the old palm trick, where you press the Mount of Venus on your palm with two fingers and do the same to the meat. Somewhere in that translation, the meat is supposed to be cooked to perfection. The more technical approach is to use something like the ThermoPro TP25 500FT Bluetooth Meat Thermometer with 4-Probes.

Temps anyone can see

The ThermoPro thermometer can measure the temps of four different food items simultaneously. It comes with four color-coded probes for measuring the temp of what you’re cooking. One side of the probe plugs into the corresponding colored port of the unit, and the other goes into the meat. The temperature then appears on the corresponding square on the ThermoPro’s display. This information also corresponds to the data you’ll find on your phone in the ThermoPro BBQ app.

We’re getting ahead of ourselves. The setup of the thermometer is straightforward and fast. The only thing that takes any real time is charging the thermometer, and you do that using the micro-USB to USB charger included in the package. While it’s charging, it’s a good time to download the ThermoPro BBQ app from the iOS or Android store. It’s easy to search for it in the app store or scan the QR code on the back of the unit. Once installed, ensure Bluetooth is activated on your phone, press the Bluetooth button on the back of the device and it connects almost instantaneously. We were all impressed with the seamlessness of the whole experience.

The thermometer itself sports a backlit display (that you can turn on and off), so you can still see what’s happening in the dark. There’s also a metal hook on the back of the display, so you can attach it easily to the handle of a grill or use the two included probe clips to attach it to a nearby post.

Most people who know me, know I’m not always a fan of having a corresponding cooking app. In those instances, it’s usually because the app feels like an unnecessary add-on. The ThermoPro TP25 BBQ app is a lesson in what one of these apps should do, and it does it well. We already mentioned the easy setup, but it’s also extremely intuitive to use, and it’s particularly helpful for people who know next to nothing about grilling as well as those who do — no small feat.

It’s particularly helpful for people who know next to nothing about grilling.

The color-coded probes aren’t just for making it easy to connect to the thermometer. They also correspond with the app, which is where you select what that probe is measuring. The app has all the preset USDA-approved temperatures for poultry, beef, veal, pork, beef, ham, fish, lamb, and turkey. Where appropriate it also offers options for rare, medium rare, medium, medium well, and well done. Once you insert the probes, select what you’re cooking in the app and the level of doneness. If you’re a grilling pro, you can also create profiles to set your own temps and an ambient temp for keeping your grill, oven, or smoker within a certain range.

When the food you’re cooking gets within range, it will alert you with a pre-temp alarm in case you need to make any preparations for removing the meat. The phone app also has an alarm (that you can turn on/off) that sounds when the meat is done. If the phone and the thermometer are going to be nearby to each other, we recommend silencing the alarm on the phone since the thermometer has one too. It gets to be a bit chaotic if they both go off near each other. Even if you turn off the alarm on the phone, you’ll still get a notification on your phone.

What’s for dinner? Everything!

Testing the ThermoPro TP25 was more fun than expected. To test the TP25, we decided to cook a variety of proteins on a Hibachi grill because it’s one of the more uneven cooking surfaces. So much depends on the coal’s heat and meat placement. We got salmon patties, steaks, pork chops, and chicken kabobs and invited our favorite grillers over to see what they thought of the process.

The ThermoPro claims to have a range of 500 feet — and it really does!

We placed the food on the grill and didn’t insert the probes until we flipped the meat. At that point, we could identify what we were cooking and the level of doneness in the app. First, we were impressed that the temp on the ThermoPro and the app were in sync, that hasn’t always been the case with meat thermometers we’ve tested in the past. We appreciated that the temps were different for everything we were cooking. Finally, the device touts that it maintains its Bluetooth connectivity for up to 500 feet, and it did. One of the issues with testing Bluetooth-connected apps and devices is distance — the phone gets out of range, and the connection is lost. We’re happy to report that didn’t happen.

The only issue we had with the thermometer was in regards to the probes. The probes are metal, so when you remove them from the meat, they are extremely hot to the touch. To be fair, a huge warning sticker on the probe says, “Always remove probes with gloves.” The other challenge we encountered was that monitoring the temp of four different items on a tiny hibachi grill got a little messy — it was easy to tangle up the probes with each other even though each has a plastic winder to avoid this situation. We expect this wouldn’t be as big of an issue with a larger cooking surface or with smokers.

In the end, when we served the food, one of our guests said they were “dazzled” and thought the meat was cooked perfectly. We were impressed with how easy it was to use and that it did cook everything to perfection — something we’ve always found challenging. I particularly enjoyed seeing meat that didn’t have a bunch of cuts in it to see if “it was done.”

We were impressed with the ThermoPro TP25 and the corresponding BBQ app — both did what they’re supposed to and did it well. We were impressed with how easy it was to use, and it was the first experience we had grilling where the meat was cooked perfectly on the first try. The four probes are probably more than most people will use, but then again, you don’t have to use all of them every time. In that way, we do appreciate the flexibility the unit provides. People who do a lot of smoking of meat and grilling will probably get the most use out of it, and it’s a pretty inexpensive way to turn your barbecue into a smart grill.

There’s a large selection of Wi-Fi meat thermometers, and often the Meater Plus is at the top of that list. That model is in the same price range, but can only do one piece of meat at a time and is probably better suited for a stove. There’s also the Inkbird IBT-4XC, which has four probes as well, costs a bit less, but doesn’t have the range.

A meat thermometer should last at least a couple of years if you take care of it, which means you should check it and re-calibrate it every six months to ensure it’s in good working order.

At $60, it’s a bit more expensive than the average thermometer, but it’s not the most spendy Bluetooth meat thermometer either. You’re getting four thermometers in one, so it’s a deal if you think about it that way. This model is a great option if you’re looking for a gift for the grill master in your life. It is worth every penny if you want to take the guesswork out of grilling. No one has ever been “dazzled” by my grilling capabilities before.