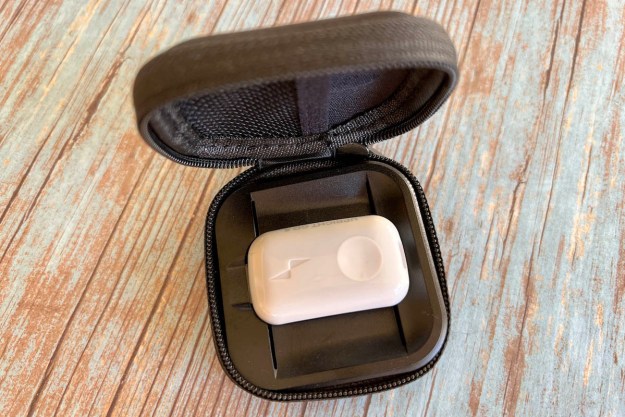 “The Upright Go S is a smart posture trainer that gently reminds you to sit up straight anytime you begin to slouch.”

It’s not the same as running five miles or lifting weights, but anyone who spends the majority of their day at a desk working from home or at the office knows that it can be physically taxing too — and not in the good ways. That afternoon lean, and the slouch that develops from hovering over a keyboard, can not only give you a hunchbacked look on a daily basis, it can also start to create more enduring problems. Trouble is, most of us don’t even realize we’re leaning, so how could we possibly stop it? The answer is Upright Go S.

What is Upright Go S?

Simply put, Upright Go S is an ergonomic device known as a posture trainer that consists of a small thumb-sized plastic bean that either sticks to (using body safe adhesive) or hangs over (with an optional lanyard) your back. Using sensors that detect its position and orientation, it will deliver gentle vibrations if you start to lean; a mindful nudge that you’re slouching. A companion app provides feedback on your progress.

Upright Go S is the smallest and smartest posture trainer on the market.

With the Upright Go S, you first need to calibrate the device so it knows what straight and hunched are for you. You can adjust your posture or slouching range from Level 1 (relaxed) to Level 6 (strict). You can set a delay for posture notifications from five seconds, 15, 30, or up to one minute. The delay is actually smart, because if you bend over to get something on the 5-second delay option, for example, you get a buzzy warning. The best delay in my testing experience was 15 seconds; long enough so every reach or lean didn’t get a nudge, but short enough that I didn’t get comfortable in a stoop.

You can customize the vibration options among gentle, medium, and strong.

Like many of you reading this, I thought my posture was just fine and assumed this would be an easy day of wearing the Go S. Turns out my posture wasn’t as rigid as I would have liked, and on my first day I only scored 50% on the straight vs. slouch scale. Not only that, using my core to sit up definitely left me feeling like I’d completed a mild abdominal workout. After a couple of hours, I cried uncle and put it away for the day.

My next go-round with Upright Go S was better since I knew what to expect; I was able to seat myself properly in my chair, stay straight without as much effort, and raise my score.

Attaching the pod to my back with adhesive was easy enough (though my husband told me it was a bit crooked) and the adhesive was strong to hold and didn’t hurt at all to remove. It was quite easy to forget I was wearing the Go S … unless I slouched.

In short, the Upright Go S is easy to wear and seemed to do exactly what it promises: Let me know when I’m slouching.

In the stats tab of the Upright app, you can view your progress day by day. On my first day of use, I ended up with a score of just 50%. This meant half the time I was wearing the pod I slouched and received reminders, while the other half of the time I stayed basically upright. Upright wants you to aim for a minimum of 60 minutes per day wearing the device, and you’ll get little virtual high fives if you make it. I was better prepared for my next use, and I’m not at all shy about saying I got a perfect score.

The stats are easy to read and understand and provide a clear marker on how well you’re doing, while giving you improvements to aim for.

You can also compare your posture to the healthy range averages as well as view your progress over time.

The Upright Go S should last about 20 hours, or 2.5 days according to the company. It must go into some kind of sleep mode when it’s put to bed in its case, and I don’t recall if I actually powered it down or not, since I used it the first day then set it aside for several days and it was still working on day 5.

Battery life is visible in the app. When it is time to recharge just connect the USB-C cable and you should be full again in about three hours, which did jive with my testing.

Initially, I wasn’t too sure about the use of adhesives. I figured after my supply ran out I would be hard-pressed to want to pay for more. Turns out the company actually makes it pretty easy to reorder, since you can grab new ones in the app at about a dollar per pop. They are definitely reusable, though not surprisingly, the adhesive is most sticky during its first use and less so across subsequent wearings.

Upright says you should be able to get about 10 uses per pad, depending on skin type, sweat, how many times you stick and unstick it, so I thought that was pretty reasonable. In my testing, I’d say I got my 10 uses, and by keeping it clean and putting the Go S away in its case I was actually able to extend that by several uses.

The other option is the add-on lanyard or necklace as the company refers to it. Made of silicone and magnetic, it’s priced at $19.95 and has a USB-style port that lets you clip the Go S into it. After that, you just let it hang down on your back. It’s a cool option to have if you don’t want to fuss with adhesives.

I’ve been surprisingly impressed with Upright Go S. Initially I really thought this was a silly gimmick, but after wearing it for a week, I can say it has definitely made a difference in not just my actual posture, but in how aware I am of how I’m sitting or standing. The device is compact and you could easily wear it with no one else ever being the wiser, unlike a lot of those belts and halters. The Go S is billed as a budget version, but as far as I’m concerned it didn’t feel like I was missing out on any features (though I am curious about what the Go 2 model would add to an already solid package).

Other options if you’re surfing for posture training devices include braces and halters, belts, or vests. In terms of there being another smart, connected posture correction device that is easy to hide, Upright Go appears to own the market.

The Go S is made of plastic, with a rechargeable battery. While it feels sturdy enough in hand and on my back, I would be interested to know what would happen if it got dropped, and how long a lifespan the battery has. But as far as I can tell so far it appears solidly built.

Yes. Generally speaking, when a product checks all the boxes it almost seems too good to be true, but in this case, Upright Go S is no dream. It’s the real deal. I can definitely recommend the Upright Go S. It absolutely works as advertised, and it does its job of keeping me sitting straight and tall.