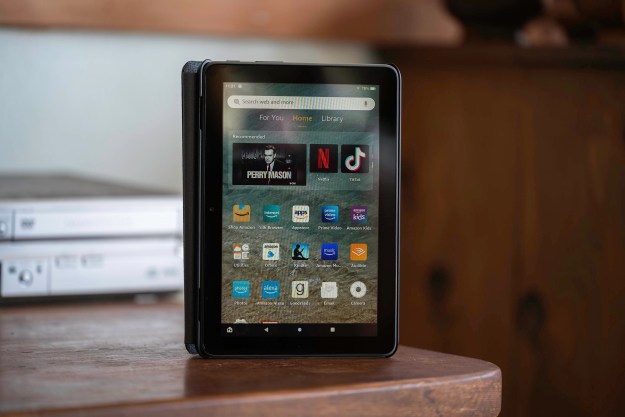 “The Amazon Fire HD 8 Plus is an affordable tablet for people who love Amazon services, but it comes with some serious caveats.”

An expensive tablet is something of a questionable purchase these days, particularly if you’re living on a tight budget, or already own a large smartphone. That’s why a super-affordable tablet like the Amazon Fire HD 8 Plus (2022) is so appealing. On paper, you get practically everything you expect from an iPad or other premium tablet for not much more than the cost of an ad-supported Netflix subscription. That comparison is rather apt, as ads are how Amazon has achieved such an absurdly cheap price point for the HD 8 Plus. But is the low cost of this budget tablet worth the tradeoffs, or has Amazon cut too many corners?

Surprisingly, the Amazon Fire HD 8 Plus is very well made in a functional sort of way. It’s not fancy or premium, but the textured plastic back is actually really nice. Compared to glass or aluminum, it is easier to grip and won’t show wear and tear as easily. I very much appreciate the presence of a 3.5mm headphone jack, which is a feature I’ve missed in high-end modern phones and tablets. The Fire HD 8 Plus also has a USB-C port, which is great to see, and includes a charging brick, something that is not so often included with devices these days.

On the other hand, the bezels around the screen are quite obtrusive, and definitely expand the footprint of the device, making it less portable than a tablet with smaller bezels. This is a compromise I’d expect to find in a budget tablet.

Amazon claims that the Fire HD 8 Plus has a reduced carbon footprint due to its packaging. The packaging is fully recyclable, which is great, though the benefits of that packaging are somewhat vague. The packaging is made from wood fiber-based materials from responsibly managed forests or recycled sources, but such claims of responsible forestry are often of questionable merit, and I’d be much more impressed if the packaging was made fully from recycled materials.

I tested the Fire HD 8 Plus with the optional case, which makes the tablet feel and look significantly more premium. A good case is almost essential for a tablet, given how many I’ve seen friends and family break over the years.

The HD 8 Plus display is merely OK; it offers decent color, contrast, and sharpness, though I did find it to be a little bit dim. At max brightness, it was very difficult to use outdoors, and at 1280 x 800 resolution, it’s not impressive — but it gets the job done. The speakers on the Amazon Fire HD 8 Plus are perfectly acceptable, if not particularly fantastic.

In general, the performance of the HD 8 Plus is fine. When browsing the home screen, using a web browser, or streaming media, it’s snappy and responsive. The new, faster processor enables an advertised 30% boost in processing speed over its predecessor, enabling picture-in-picture video and split-screen capability. Gaming is possible on the HD 8 Plus, and I was able to enjoy My Friend Pedro: Ripe for Revenge. However, I did run into frame rate drops despite it not being graphically demanding.

The camera on the HD 8 Plus is the worst I’ve used in years. Image quality is bad even in broad daylight, and in even mildly dim interior conditions, photos turn out muddy and indistinct. The selfie camera delivers 2MP still images and 720p video capture, while the rear-facing camera shoots 5MP stills and 1080p video.

The first digital camera I ever used nearly two decades ago delivered higher resolution and better quality images than this. The camera interface is also as basic and difficult to operate as possible. These cameras are so bad it’s questionable whether they should have been included in the first place.

The HD 8 Plus runs a heavily modified version of Android called Fire OS. It’s been a while since I used a Fire OS device, but the experience hasn’t improved since I last picked up an Amazon device. It’s ugly and locks you into Amazon’s ecosystem, as it doesn’t offer access to the Google Play Store. This means that you’re restricted to apps acquired through Amazon’s own app store, and a lot of popular apps are missing or put behind a confusing paywall.

For example, I wanted to install Ultimate Guitar, but it costs $3 on the Amazon App Store despite being free in the Google Play Store. I already pay an annual subscription for Ultimate Guitar, and I’m not about to spend an extra $3 for the privilege of using it on the Fire HD 8 Plus. Furthermore, some apps (such as YouTube) installed just fine, but then failed to launch correctly.

If you look at the Fire HD 8 Plus as a portal into Amazon’s ecosystem, it makes a lot more sense than as a traditional tablet.

Basically, once you venture outside of Amazon’s own apps and a handful of aggressively monetized mobile games, it’s a pretty miserable experience. The first-party Amazon apps are great, and you can use the device purely with voice commands via Alexa like a smart speaker. If you look at the Fire HD 8 Plus as a portal into Amazon’s ecosystem, it makes a lot more sense than as a traditional tablet.

An advantage of the Fire HD 8 Plus is that it delivers rather impressive battery life. With mixed use between browsing, streaming, and gaming, I found that it really does clock in around the 13 hours of battery life estimated by Amazon. Unfortunately, it’s mildly slow to charge, taking around three hours to go from empty to full.

The potentially redeeming factor of the Amazon Fire HD 8 Plus is the incredibly low price point of just $120. That’s just a fifth of what an iPad Mini will cost you, but as someone who owns last year’s iPad Mini, I believe the iPad Mini is five times the tablet that Fire the HD 8 Plus is. Beyond all the problems already mentioned, the HD 8 Plus is an ad-supported tablet, meaning that your lock screen is an advertisement, and there are ads on the home screen.

At first, this didn’t bother me too much, but over time I really grew to loathe the constant ad bombardment. People I’ve known who’ve used these devices have given them up because they couldn’t put up with ads anymore. However, you can buy the Fire HD 8 Plus without lock screen ads for an extra $15, which I would highly recommend if you’re planning to buy this device.

However, the bargain price of the Amazon Fire HD 8 Plus isn’t even really that good when you look. For $10 less at the time of publication, you can pick up a Samsung Galaxy Tab A7 Lite that has similar specs to the HD 8 Plus, and it isn’t infected with baked-in advertisements or hobbled by Fire OS and the absence of the Google Play Store.

Also, that $120 is just for the base version with 32GB of storage. If you want 64GB of storage like the model I tested, it’ll set you back $150. And if you want the case bundled in, it’s $195. The Amazon Fire 7 is much more attractive as an ultra-budget Amazon tablet, given that it starts at just $60.

A tablet for Amazon superfans only

The Amazon Fire HD 8 Plus (2022) is an improvement over its previous iterations, and that’s really the best thing I can say about it. The Fire HD 8 Plus is fundamentally a portal through which Amazon’s services can be accessed, and the only people I’d recommend it to are those who just want a tablet to watch Amazon Prime streaming, listen to Amazon Music, and interact with Alexa-enabled smart home devices. Everyone else is better off with any other tablet.

Topics
Video-editing app LumaFusion to get a Galaxy Tab S8 launch
When is my phone getting Android 13? Google, Samsung, OnePlus, and more
The best Android phones in 2022: Samsung, Google, and more
The U.K. wants to break up Google and Apple’s cloud gaming stranglehold
The best rugged smartphones of 2022
We asked the experts if biological sex affects heart rate sensor accuracy
I still love my iPhone 14 Pro, but not for the reason I expected
The best iPhone apps to download in December 2022
Instafest app: How to make your own Spotify festival lineup
How old phones became the cool, good phones in 2022
The best Android apps for December 2022
The Galaxy Z Flip 5 might fix the Flip 4’s biggest design flaws
Don’t listen to billionaires like Elon Musk — app stores are fantastic