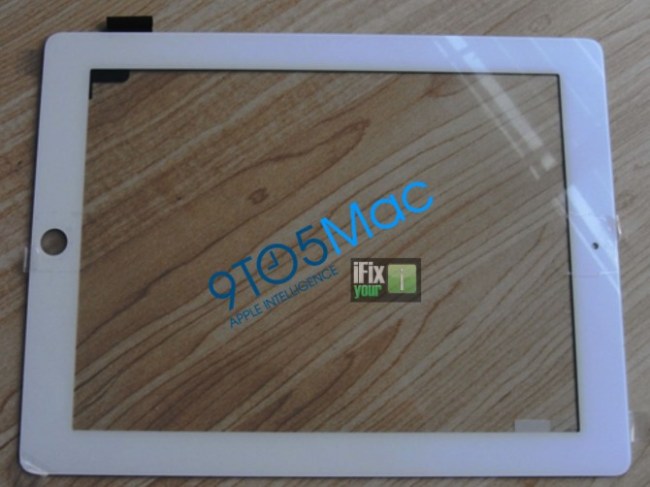 File this in the “we’ll believe it when we see it” category: Rumors has it that Apple will announce the release of a white version of its second-generation iPad at its upcoming event on Wednesday, March 2.

News of the white iPad 2 comes via 9to5Mac, which has pictures (above) of what convincingly looks like a white-colored bezel to an iPad. The piece, which surrounds the display, comes from Shenzhen City, China, via the good folks of iFiYouri iPhone repair shop.

Giving credence to the white iPad 2 rumor is the fact that the piece includes a small hole for what will presumably be a front-facing camera — a feature long thought to be included in the next-gen iPad. As 9to5Mac points out, the hole also matches up with leaked iPad 2 screen protectors coming out of Asia.

We know what you’re thinking: Apple couldn’t even successfully release the iPhone 4 in white, after all this time. How could they possibly expect us to believe that they have a white iPad in the works?

Without details directly from Apple, we can’t say for sure. But it’s possible that they have the problems with white-colored parts sorted out.

Late last year, we reported that the mythical white iPhone would be available this spring. If that’s correct — and it remains unclear that it is — then it’s not such a stretch to believe that the second-generation iPad could also sport the ghostly hue.

It also raises the possibility that Apple will announce on Wednesday that the white iPhone is finally ready to go on sale. Release of the iPhone 5 is expected to happen on the normal schedule, in June. So it would make sense that Apple would want to get all its iPhone 4 business out of the way before that time.

Either way, we’ll know all the facts on Wednesday. Until that time, expect a flood of iPad 2 rumors — of both the legitimate and completely-crazy variety — to come rushing out. Which category this white iPad rumor falls into will be known soon enough.

Video-editing app LumaFusion to get a Galaxy Tab S8 launch
It’s official: Apple is required to make a USB-C iPhone by 2024
Samsung Galaxy Watch 5 Pro vs. Galaxy Watch 4 Classic
Waiting for Touch ID on a new iPhone? This report has some bad news
Apple comes clean with what it really thinks about iPhone 14’s Dynamic Island
OnePlus wants your help to plant thousands of new trees
How to remove watch links from the strap on your new watch
Best cell phone plan deals for October 2022
When is the best time to post on Instagram?
Best Google Pixel Deals: $250 off the Pixel 6 Pro
The best Samsung Galaxy S20 deals for October 2022
Best Samsung Galaxy Note 20 deals for October 2022
How to manage all of your Apple Watch notifications