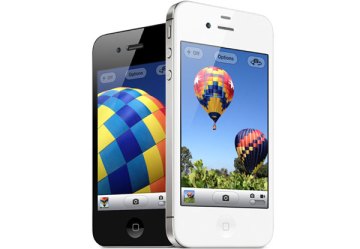 The disappointment voiced by many over the absence of an iPhone 5 at Tuesday’s Apple event appears not to have had much effect on initial sales of the phone that was unveiled – the iPhone 4S.

According to a Reuters report, US mobile carrier AT&T took pre-orders for more than 200,000 in the first 12 hours after the device went on sale at 3:01 AM EDT Friday.

That’s a colossal number for such a short space of time and according to AT&T breaks a new record.

Speaking to AllThingsD, an AT&T representative said, “AT&T has seen extraordinary demand for iPhone 4S with more than 200,000 preorders in the first 12 hours alone, the most successful iPhone launch we’ve ever had.”

Many consumers had been hoping for an all-new design for the iPhone when it was unveiled on Tuesday. However, as far as external appearances go, the iPhone 4S is identical to its predecessor, the iPhone 4. Wall Street analysts said that despite this, the 4S’s hardware and software improvements alone would be enough to secure decent sales – judging by these initial figures, it seems like they could be right.

Reuters says that some analysts believe that Apple will shift around 27 million iPhones in the last three months of this year. Together with AT&T, Sprint and Verizon Wireless also started taking orders for the iPhone 4S early Friday.

A statement from Sprint vice president of product development Fared Adib didn’t give specific numbers but did suggest that sales had been impressive at the launch. “We are very, very pleased with the initial first day of iPhone 4S pre-orders. Today’s sales and the overall customer experience greatly exceeded our expectations,” he said.

The new device, which features an improved camera over that found in the iPhone 4, as well as a faster processor, will appear in stores worldwide on October 14.