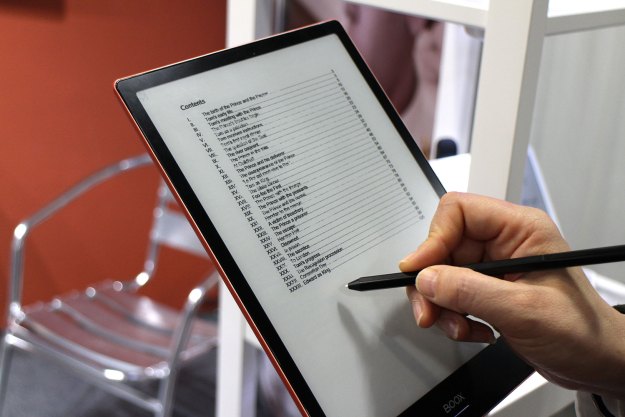 “Massive screens and a long list of features make the Boox Max 2 and Note Pro ebook readers you’ll want to stare at.”

E Ink screens are wonderfully versatile, and are surprisingly underused outside of ebook readers like the Amazon Kindle, and quirky devices like the Yotaphone. Boox — a name that’s pronounced like “books” — has been in the industry for years, but is only now branching out into selling its own hardware. At CES 2018 we met with the company to see its two latest products, the Boox Max2 and the Boox Note Pro, two big-screen, tablet-like devices that allow you to do so much more than just read the latest book.

We spent the most time using the Max2, which beats even the 12-inch iPad Pro when it comes to screen size. The massive E Ink Mobius display measures 13.1 inches and it has a 207dpi resolution. That’s higher than any other tablet of this size out there, and it makes a big difference. The screen is glorious — pin-sharp detail and crisp text, exactly what you want from a device like this. The screen is surrounded by a plastic bezel and wrapped in a very lightweight and slim metal body. It’s comfortable and easy to hold with one hand, and the sheer size gives a magazine-like reading experience.

While reading on an E Ink screen is always the No. 1 reason for buying one, the Boox Max2 does plenty more. It comes with a Wacom stylus to annotate PDFs, take notes during meetings or class, or even write music. There are built-in templates for all this, plus for artists, there are a variety of brushes and fonts to draw on the pressure sensitive screen with. E Ink screens have a reputation for being slow, but the Max2 is fast and fluid, and the stylus is brilliant to use, with notes and text appearing instantly. Everything can be saved and exported using a Wi-Fi, Bluetooth or Micro USB connection.

Alongside the Micro USB port is a Micro HDMI port, which when connected to a computer turns the Max2 and Note Pro into a second display. This won’t be a feature for everyone, but could be useful for anyone who wants to avoid reading long documents on a PC screen. This is where E Ink screens excel — they don’t strain your eyes, which is why they’re so great for reading in bed.

Reading on an E Ink screen is always the number one reason for buying one.

Is the Max2 suitable for bedtime reading, considering its size? Possibly. Its definitely light enough, but it’s far from subtle. That’s where the Boox Note Pro comes in. It’s has a more sensible 10.3-inch screen size, with slim bezels running down the sides, yet still offers the same high resolution screen and speedy operation. The design is less businesslike as well. The two ebook readers have plenty of power with a 1.6GHz quad-core processor and 2GB of RAM, and either 32GB or 64GB of storage space. The 4,100mAh battery should last around a month without recharging with average use.

Both Boox tablets run Android 6.0, and have custom user interfaces over the top. It’s not like using your smartphone, despite the presence of Google’s operating system. The Max2 has several physical buttons to accompany the touchscreen, while the smaller has a single home button below the screen. Operation is swift, although don’t expect it to be as fast as using an Android tablet or an iPad — E Ink screens and devices don’t work like that. The user interface is fine, although it was a little confusing to use, and finding your way out of apps was often confusing or took too long. This should disappear after you’ve used it for a while though.

There’s plenty of file support — 11 different types in all, including PDF and some comic book formats — and additional features that make it a cool creative tool as well. They are quite expensive. It’s $800 for the Max 2, and $500 for the Note Pro, and both should be available to buy soon. While these prices sound high when compared to Amazon ebook readers, it’s in line with other similar examples like the Sony DPT-S1 and the ReMarkable tablet.

We liked the Boox ebook readers a lot. The build is excellent, they feel great in the hand, and the screens look superb. Most of all, we liked the versatility. Read magazines, books, and music, take notes, listen to audio through the speaker, and even the bonus of it working as a second monitor. If you’re investing in a big-screen ebook reader, definitely consider a Boox.

Topics
Video-editing app LumaFusion to get a Galaxy Tab S8 launch
The iPhone 15 Pro’s rumored new design is one I can’t wait for
The best iPad keyboards for 2023
The best tablets for seniors for 2023
The best USB-C headphone adapters for 2023
Is the Samsung Galaxy A14 5G waterproof?
The best fitness trackers in 2023: our 10 favorite picks
Watch the Galaxy S23 Ultra get unboxed a week before launch
The best iPhone apps in 2023: 50+ apps you need to download now
The best folding phones in 2023: our 6 favorite foldables right now
You can finally take ECGs and track AFib on a Garmin smartwatch
I bought a $50 Apple Watch Ultra clone, and it blew me away
Best cheap phones in 2023: our 5 favorite ones for tight budgets