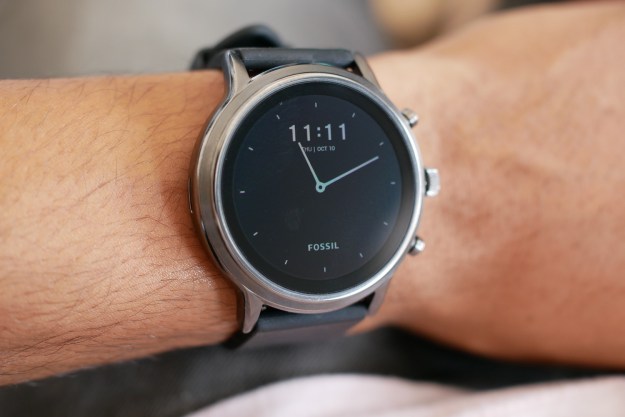 Google’s Wear OS watches have a hard time distinguishing themselves, but a few poke their head just above the status quo with slick looks and decent performance. That’s the case with the Fossil Gen 5.

The $300 price tag is well within a reasonable range for a stainless-steel, fashion-first Wear OS watch such as this one, but as usual, the problems with Wear OS smartwatches revolve around the software experience, which often feels like an afterthought.

Most Wear OS watches try to look like traditional watches, and the Fossil Gen 5 is no different. It does opt for a more understated, masculine look without looking too bold. It fits in just as well at the gym as it does with a suit and tie, though you may want to do some watch face customization, as the preloaded options aren’t particularly pleasing.

We reviewed the ‘Carlyle’ style, the more masculine option. There’s also a ‘Julianna’ model that takes a more feminine approach. The differences are entirely cosmetic, as both are the same size and have the same features.

The watch is also 3 ATM water resistant and perfectly fine to swim with, but not dive, and the watch straps are interchangeable with any 22mm bands. I’m quite happy with the default silicone strap, though.

Figuring out what buttons you have and what they do is always a guessing game with Wear OS watches. The Fossil Gen 5 has three on the right side — the one in the middle doubles as a rotating crown for scrolling through lists. True to Fossil’s stylistic roots, the default action for the top button is a shortcut to preset watch faces you have customized, making it simple to swap your watch’s look. Double-clicking this button can also bring up Google Pay. The middle button is what you’d expect, a home button, which will bring up your app list when you’re already home.

An app switcher would be perfect here, if Wear OS supported it, but I’d at least settle for music controls, so I don’t have to use up one of the other buttons for this. The bottom button is set to Google Fit, but you can just as easily get there by swiping right on the screen once. Thankfully, both the top and bottom buttons can be configured to launch any app of your choice (though there aren’t many to choose from) but inexplicably you can’t choose shortcuts for double-presses.

The basics are covered

In terms of first-party applications, the basics are covered. You have an alarm clock, agenda, stopwatch, weather app, Google Fit, and a few other requisite apps. These all work well and serve their functions properly, with the alarm clock being a minor exception.

There was a persistent glitch that forces you to go find the alarm clock application (or check notifications) to turn off the alarm when it wakes you up. This glitch happens when you turn off the display before bed, and the alarm does not show up on the screen when time is up. Leaving it on, however, makes this glitch disappear.

Google Fit also does a decent job for fitness tracking which, paired with the heart rate sensor and GPS, can log your exercise data from any activity with the general workout option, or more specifically with certain activities. You’re not going to get the most complete health suite here as you’ll find neither the more granular and varied exercise tracking options of the Samsung Galaxy Watch Active 2, nor sleep tracking functionality. For those unconcerned with a watch that can more accurately count your reps, track specific exercises, and quantify your sleep at any capacity, the Fossil Gen 5 should do the job fine.

Google Assistant’s also on-board for you translate languages, set reminders, or ask it questions in any way you might on another other smart device. It’s a little slow here, though.

Overall, Google’s Wear OS performs well. With an atypical 1GB RAM and the latest Snapdragon Wear 3100, it’s the smoothest-operating Wear OS watch I’ve used. I experienced no lag, freezes, or stutters in my use; the Fossil Gen 5 always did what I wanted and did so promptly.

I quite like the rotating crown for scrolling through lists, even though it inexplicably doesn’t work on a few particular screens. Much like navigating the OS, the rotating crown is satisfying and responsive with the right amount of resistance to keep the scroll tactile and accurate. I actually prefer it to the feel of the Apple Watch’s rotating crown, which is a little loose and sensitive for my liking.

The Fossil Gen 5 is the first Wear OS device to support tethered phone calls on iPhones.

Speaking of Apple, the Fossil Gen 5 is the first Wear OS device to support tethered phone calls on  iPhones, thanks to Fossil’s own work on the matter. Taking calls on the Gen 5, the speaker performs well enough that you don’t have to have the watch directly in your ear, but should be alright to hear a call with the watch near your mouth.

The only other problem I have with the core experience is a rather consistent issue with connectivity. On both my iPhone 11 Pro and Galaxy Note 10, I’d often find my phone had notifications my watch never received, only to realize it’s been disconnected from my phone for an unknown amount of time. Each time this happened, I had to go into settings, turn Bluetooth back on, as it would mysteriously be flipped off, and wait for it to connect to my phone again. I tested this on another unit and didn’t have a problem, so it’s likely a defect with my unit, but you’ll want to make sure you contact Fossil support if you hare having the same issue.

It’s unfortunate but true: Google’s Wear OS is the only viable option for Android-compatible smartwatch manufacturers not named Samsung. Wear OS doesn’t struggle too much with polish or functionality, but where it lags behind is in the app experiences offered. While Samsung’s Tizen struggles with third-party app support as well, it’s still ahead of Google on this and also provides a more complete first-party app experience.

As I mentioned earlier, if fitness is your focus, you’re much better off with a Samsung Galaxy Watch or Apple Watch, and that’s also the case if you desire certain third-party app integrations. Wear OS has apps like Strava, Google Maps, Uber, and Spotify, but if there’s an app you’re looking for outside of those, or Google’s app suite, you’re not left with many options.

The app store for Wear OS is pretty barren, and lacks the quality and quantity found on the Apple Watch. Even Samsung’s watches do better with third-party support, but not by much.

As much as I like Samsung’s watches and Tizen OS, there are certain navigational, aesthetic, and functional choices that I simply prefer on the Fossil 5 and Wear OS. But with lackluster health features, and poor third-party app support, it’s hard to throw on the Fossil Gen 5 over its non-Wear OS competition for anything much more than its looks.

Lasts about a day

Fossil hasn’t added a larger battery, but instead now offers a few battery modes you can utilize to squeeze out a bit more juice. Each one takes a bite out of functionality in service of the battery, but a custom mode allows you to choose which ones you can do without to save some hours of use.

Daily mode, which leaves your watch at full functionality does last through the day, but you’ll definitely need to pop it on the charger before bed. Without a sleep tracking feature compelling you not to, that’s a pretty small ask.

The Fossil Gen 5 retails for $300 and comes with a two-year limited warranty for defects.

If Wear OS is your jam, then the Fossil Gen 5 is the best you can do. It balances versatile looks with solid, stainless-steel construction.

For Wear OS, you have a few options from designers like Michael Kors, Montblanc, Armani Exchange, and more. For about $50 less you can also nab a Mobvoi Ticwatch Pro, though it’s a bit bulkier and comes off less aesthetically refined than the Fossil watch.

Beyond that, you have Samsung’s Galaxy Watch Active 2 for either $20 less or the same price, depending on the size of the casing you choose. This watch retains a minimalist look but has deeper health and activity features as well as slightly better third-party app support.

And then there’s the Apple Watch. While you could argue the Fossil Gen 5 looks better, it can’t compete in virtually any other aspect. Plus, you can grab a Series 3 for as little as $200 and get all of the same features or spend $50 more for ECG functionality on the Series 4.

With a generous two-year warranty, 3 ATM water resistance, and a solid stainless steel construction, it’s plenty feasible to have this watch for two to three good years before battery life becomes too big of a problem.