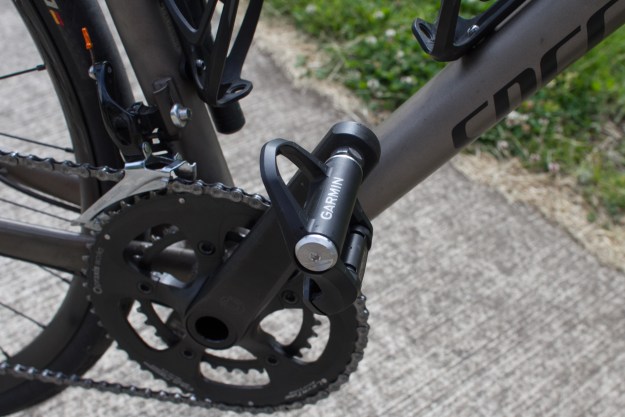 “The Vector 3 pedals bring an amazing amount of accurate information to riders in a neat and easy-to-use package.”

Why would anyone want to spend a bunch of money on smart bicycle pedals? It should be easy to tell whether you’re pedaling harder or softer because you’re the one pedaling, right?

After 200 miles with Garmin’s Vector 3 pedals, I can say that they do so much more than tell you if you’re smashing the pedals. From tracking my average wattage and left/right balance during long rides, to making pacing easier, to discovering I push on the outside of my right pedal (warranting a cleat adjustment) I’ve learned more about how I pedal in my last five rides with the Vector 3 pedals, than in the previous 20 without them.

Out of the box, the Garmin Vector 3’s components are simple. Two pedals, two Look Keo cleats, some washers, spare gaskets, and manuals. Gone are the ridiculous Pods from the previous Vector 2 pedals. The Vector 3 pedals only take a 15mm pedal wrench to throw on, and then installation is complete.

Connecting the devices you may use with the pedals isn’t as simple. Through some trial and error, I found the best way to sort through this process was to:

It was a bit of a headache getting everything to connect while the Bluetooth on my phone was still active, because the pedals wanted to stay connected to that Bluetooth signal, instead of switching to ANT+. One of the pedals wouldn’t properly connect, and calibration never fully finished. Once I figured this out, and forced my computer to connect via ANT+, it was smooth sailing.

Once you’re finished, there’s a simple calibration process that only requires you to unclip and the pedals do the rest. You should calibrate every couple of rides, and especially after the first ride, to make sure everything is reading correctly.

Fully redesigned from the previous model, the Vector 3 pedals are clean, sleek, and some of the lightest options available. Weight weenies should be happy, because the Vector 3 pedals come in at a combined 316 grams. In comparison, my Shimano Ultegra pedals come in at 260 grams. That bit of extra weight comes from the force-measuring tech neatly stowed away within the pedal spindle.

Also in the spindle is the battery compartment for the Vector 3 pedals. A design choice that may be an issue for some, the Vector 3 uses four LR44 batteries (two for each pedal). When most every other Garmin product I’ve used in the last several years use a rechargeable lithium-ion battery, the Vector 3 pedals don’t. I’m not sure why Garmin went this route, but the upside is that battery life is up to 120 hours and that’s a whole lot of bike rides. The downside is that if they do go dead while you’re traveling, or somewhere vaguely remote, you might not be able to find the LR44s you need.

Garmin stuck with the Look Keo cleats from the previous Vector 2 pedals. These will fit any normal road cycling shoes that have a 3-bolt attachment. Just be aware that spd/mountain bike shoes won’t work.

Once I was pedaling, the amount of data that came in was staggering. First up was the power, displayed in watts, of which Garmin claims an accuracy of +/-1%. For the uninitiated, watts are essentially the measured amount of force your legs can put into the pedals.

Why is this important? Unlike training with your heart rate, or average speed, watts are completely unaffected by external factors. With watts, you always get consistent feedback regardless of how sluggish or strong you’re feeling at the moment, which makes them the most accurate measurement of your fitness on the bike. Knowing how many watts you average over a workout is a huge help in pacing longer rides, or understanding how much power you can put out in a sprint.

Seeing the amount of power you’re making is just the tip of the iceberg. Showing you exactly how you make power is where the Vector 3 pedals shine. In addition to the more standard left/right power balance and cadence captured by most other dual-sided power meters, the Vector 3 pedals compile additional metrics into what they call Cycling Dynamics.

These metrics are certainly getting into the weeds for data nerds, but PCO can help you dial in your cleat position. Your seated versus standing time can help you compare against previous efforts to see where you were more effective, while power phase can help identify whether or not you’re getting the most out of each pedal stroke. Even more, all these stats can be broken down into averages throughout any point in your ride, like hill climbs or sprints sections, for further geeking out.

After my first ride, I realized that the Torque Effectiveness and Pedal Smoothness features’ default setting is off. Strangely enough, there isn’t a way to turn it on unless you have a Garmin Edge compatible computer, like the Edge 520 plus. This means that if you’re currently rocking a Wahoo Elemnt, like I was for my first ride, you won’t be able to turn this on unless you can borrow a friend’s Garmin to enable it.

That’s a ridiculous issue, and in practice, I found that torque effectiveness and pedal smoothness were metrics I could barely understand let alone make useful changes with. I’m guessing that unless you’re an elite athlete, you’re not going to miss them.

If you don’t have a Garmin Edge device, what you will miss are the Cycling Dynamics features I mentioned previously. There is some hope on that front, though, because Garmin has released its Cycling Dynamics protocols to be used on third-party devices. At the time this article was written, only Trainer Road and Favero Electronics have adopted them. This is an odd problem to have, and vaguely indicative of the Vector 3 pedals’ somewhat tumultuous release.

When the Vector 3 pedals first came, it were firmware and product support issues that gave the Vector 3 a bad first impression. Then, users had issues with intermittent power loss due to faulty battery doors.

Thankfully, the firmware has had some major updates, including a Bluetooth smart feature that lets you use the Vector 3 pedals for Zwift, and they’ve fixed the battery door issue and shipped new doors to previous Vector 3 owners.

The Garmin Vector 3 pedals come with a two-year limited warranty.

The Vector 3 pedals bring an amazing amount of accurate information to riders in a neat and easy-to-use package. The initial issues with the Vector 3 pedals have been addressed, and with the current discounts available, they are some of the best value dual-side power meters available.

The chief competitor is the Assioma Duo Favero. These weigh slightly less at about 300 grams for the pair, are cheaper at $644, have rechargeable lithium-ion batteries with 50-hour battery life, and have integrated Garmin’s Cycling Dynamics so you’ll get all the same info. The main difference is design, with the Favero’s housing all their tech in a pod that’s mounted to the spindle for a much bulkier overall appearance. Even bulkier are the PowerTap P2 pedals — they look ridiculous.

Another promising option is an upstart company called iQ. They’re promising most of the same functionality at a fraction of the price, but are still extremely new to the market.

While the Vector 3 pedals have had their issues, the amount of support and investment that comes from being a Garmin product is hard to not favor. While the other companies may be shaking up the power meter industry, there’s confidence in buying from a name like Garmin that shouldn’t be overlooked.

A big advantage of the Garmin is its repairability. The Assiomas inject resin into their meter housing in order to make it water and shockproof. This means if something goes bad, you’ll need to replace the whole unit. With the Vector 3, everything is stowed away within the spindle, making it much easier to repair and replace parts that go bad. This is a big reason why refurbished Garmin units are so readily available. On top of its physical design, the software engineering that Garmin does, and the subsequent firmware updating, is reliably some of the best in the industry.