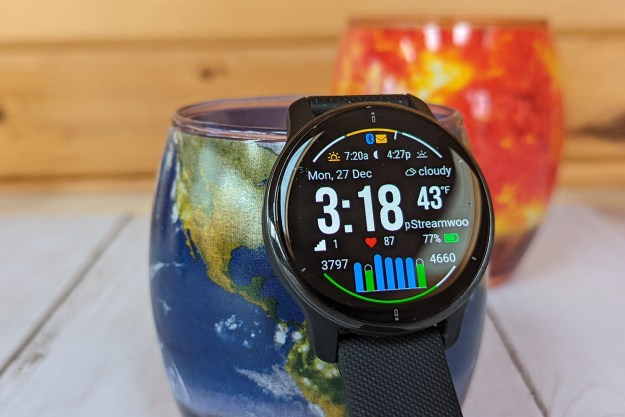 “The Garmin Venu 2 Plus is a premium smartwatch in every way, including the price. But when you factor in rock-solid connectivity, a ton of data, and voice assistant control, it earns its price tag.”

I think it’s very important that we get this review started off on the right foot by saying I am not the target audience for the Garmin Venu 2 Plus. I’m on the wrong side of 300 pounds, and the wrong side of 40, though it’s much more the former that disqualifies me. My idea of a great workout is parking down the block to go to the donut shop. So when Garmin reached out and asked me if I’d like to review their latest smartwatch, of course, I jumped at the chance. Well, I didn’t jump, because fat men don’t jump, but you get the idea.

I’ve been using the Garmin Venu 2 Plus for two weeks, and despite the fact that I am not the ideal Garmin wearer, I can see where this watch is the ideal smartwatch for me. For most of my review period, I wore the Garmin smartwatch paired to a Pixel 6 while also wearing an Apple Watch SE paired to an iPhone 13 Pro for comparison purposes.

Here are my thoughts.

The Garmin Venu 2 Plus has a bright and crisp 1.3-inch AMOLED screen that is bright and easy to read in all situations. It’s comfortable to wear, though it is a bit on the thicker side. The three buttons along the side are easy to push and give the right amount of feedback when pressed. Each button has its own function, from starting activities to accessing menus, but what’s new to the Venu series are the microphone and speaker.

The Venu 2 Plus is the first Venu smartwatch to make and receive phone calls and control your phone’s assistant.

The Venu 2 Plus is the first Venu smartwatch to make and receive phone calls and control your phone’s assistant. This is actually the feature I was most excited to test because I use Google Assistant often throughout the day. Also, especially since picking up the Apple Watch SE, I’ve gotten very used to leaving my phone at my desk as I move around the house and take calls on my watch.

Using the assistant is similar to most other smartwatches, with the exception of being able to wake them up with a command word. On the Venu 2 Plus, you need to press and hold the center button for several seconds for it to connect. It’s a little slower than I’d like (about three seconds), but it’s not terrible by any measure. Verbal responses play back through the watch, as you’d expect when accessing Google Assistant through a watch or headphones. Overall, it’s a seamless experience.

The one thing I enjoyed most about the watch is absolute rock-solid connectivity. As mentioned, I wore both the Apple Watch SE and Garmin Venu 2 Plus at the same time, and both watches rang for notifications at the same time, every single time. I’ve come to expect that kind of connectivity from the Apple Watch. Apple is Apple, after all. But on so many smartwatches and fitness trackers, frequent disconnects can be problematic. This even happens when wearing a Samsung smartwatch with a Samsung phone. But the Garmin stayed connected all the time, even if my phone was a house away.

The software on the Venu 2 Plus takes some getting used to, though. Most smartwatches utilize gestures in every single direction for different things. The Garmin sticks mostly to up and down, with only occasional sideswipes. The buttons all have different functions and rely on a press or long press for different functions. I get that there’s only so much you can program three buttons to do, but even by the end of my two-week review period, I still wasn’t used to all the functions.

Notifications are rich and detailed. The only criticism I could point out is that the notification icons are limited. Notifications for weather, Google Photos, and Vivint home security all show up with the Messages icon. Indeed, the icons that work and don’t work are quite varied. It can get a little confusing when trying to locate specific messages. Also, some options to act on messages are not straightforward. For example, when you choose to reply to an email, the phone launches the reply window. Replying to a text message is limited to a few preprogrammed responses.

The Garmin app store has a decent number of apps and watch faces that feel consistent with other app stores, including Samsung and Google Play, and far outshines most fitness trackers, like Fitbit and Xiaomi. Supported music services include Spotify and Deezer, but YouTube Music is missing. Sadly, that’s the service I subscribe to. Of course, app functionality pales in comparison to the Apple Watch, but that would assume both of those devices are looking to service the same customer, which they are not.

Before we dive into the fitness-tracking aspects of this watch, we should pause to talk about philosophies. Apple places a strong emphasis on health tracking and data, for sure. But Garmin hasn’t set out to make a smartwatch. It set out to make a health tracker first that happens to work with your smartphone. That shows in areas like the Garmin Connect app, which is dedicated to providing you as much data as you could possibly want. Also, the Garmin Venu 2 Plus tracks your heartbeat multiple times per second, as opposed to once per second, or even once every few minutes.

Sleep data, in particular, is great information to have, and unlike with the Apple Watch, tracking sleep doesn’t cut your battery life in half or more.

While I lack the professional equipment to reliably track some exercise data (e.g., a chest strap, BMI scale, O2 sensors, etc.), the data I got from the Garmin smartwatch is valuable. Sleep data, in particular, is great information to have, and unlike with the Apple Watch, tracking sleep doesn’t cut your battery life in half or more. For those really into collecting data, the watch can handle input for tracking water consumption or women’s health as well. Those have to be entered manually, of course, but it’s nice to have all that information in one dashboard.

When you engage in exercise, which for me involves a walk around the block, you get even more data, including a map of your route, speed, average heart rate, ascents, pace, and more. The Apple Watch gives you similar data, both in bed and out on the trail. Apple even adds other protection such as AFib detection and fall detection, both of which are important from a day-to-day safety standpoint. Garmin has a feature that detects high-G events (read: falls) while performing a measured activity where emergency contacts are notified if you trip and fall while out on a run. That’s nice, but it’s only during measured activities, not all the time.

Put simply, battery life is astonishing. Garmin advertises around nine days of battery life, with a full AMOLED display and heart tracking that measures several times per second. The battery will get chewed up if you add in GPS and music streaming, but for everyday wearing, this watch just keeps going.

Testing it alongside the Apple Watch SE, the difference in battery life was sobering. I had to top up the SE almost daily. By contrast, during my two-week review period, I charged the Garmin watch just twice. Even before I set up the Apple Watch SE for sleep tracking, it maxed out at two days before needing the charger.

In fact, when speaking to Garmin about my upcoming Disney trip, they challenged me to start a walking activity with full GPS at the start of a day in the park and check out the data available at the end of the day. The battery can handle constant GPS contact and aggressive health measurements throughout a full day. While this review was written prior to that vacation, I’ll be testing that out.

When I first started using the Apple Watch, I marveled at how Apple was able to create apps that were so full-featured compared to the rest of the field. The Garmin Venu 2 Plus offers an equally eye-opening experience in terms of battery life. Even if you turn on the GPS and play music constantly, you’ll still get eight hours. Nothing else I’ve tested before comes close.

The Garmin Venu 2 Plus launches on January 4, 2022, and can be purchased from Garmin for a fairly high price of $450. Garmin is quick to point out that all the health tracking you get comes with no subscription, which is fine, but Garmin has a legacy of high-priced hardware, and the Venu 2 Plus definitely continues that.

Overall, the biggest thing about the Garmin Venu 2 Plus that gives me pause is the price, but again, this is coming from a guy who doesn’t work out. Still, the battery life is awesome, the connectivity is hard to beat, and the added ability to take phone calls and use a voice assistant really completes the package for me. There are cheaper alternatives out there, and just like the Apple Watch SE taught me that apps are important, the Garmin Venu 2 Plus taught me that battery life is very important as well.

From a software perspective, the Garmin has a high learning curve, but once you get it down, it’s easy to use and surprisingly robust. Getting notifications the moment they hit your phone and being able to act on them is often not as smooth on devices that are meant to be a smartwatch first, and a fitness tracker second. Garmin really has a complete package with very few compromises here.

There’s no doubt it’s a premium device after a niche clientele. Garmin is the go-to in the fitness world, even above the Apple Watch, and it’s not hard to see why. In addition to being a device dedicated to tracking your health, with a range of accessories to assist with that, you also get a fully functional smartwatch that gets those basics right as well. That makes the Venu 2 Plus a compelling product if you have the budget for it.

If you fall into the category of customer that Garmin is after, no. This is it, with the exception, perhaps, ofother Garmin offerings. If you’re a general smartwatch user, the answer becomes less clear. If you’re on an iPhone, yes, the Apple Watch Series 7 is in many ways better, with the one notable exception of battery life. In the world of Android, the waters become murkier. The Samsung Watch 4 with Google and Samsung’s new take on WearOS is quite appealing. In terms of less expensive options, boy, howdy, there are choices. But none of them will measure up.

Garmin products have a reputation for build quality, and I can confirm the same on this smartwatch. The watch has a Gorilla Glass 3 face and can be worn for swimming up to 5 ATMs or about 50 meters. Garmin products are typically backed by a one-year warranty as well.

Yes. The Venu 2 Plus is a fine smartwatch, and it’s not even meant to be a smartwatch. Putting the PR speak aside, this is a really nice wearable that gives you a ton of health data and functionality in a single, admittedly expensive package. If you are into exercise (which some might argue is different from “fitness”), this watch is a no-brainer. If you want a smartwatch that lasts more than a weekend, you got it. If you aren’t positive your next smartphone will run the same operating system as your current one, this watch works both ways. Your bank account may not be a huge fan, but there is a lot for you to love here.