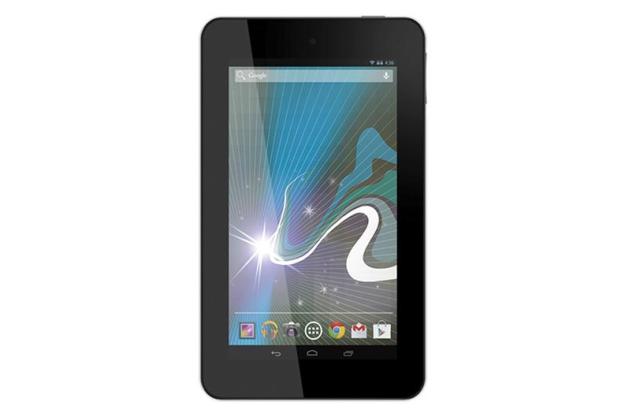 “For $170 you could buy the HP Slate 7, but it has drawbacks. You could spend $30 more and get a tablet that better balances cost and value.”

Most of the people who got the chance to play with the HP TouchPad remember it fondly. That poor tablet never got the chance it deserved; nor did WebOS. But HP is moving on with its life and choosing the safer road of making Android tablets. The first one to hit shelves is the HP Slate 7 for the low price of $170. Given that most of the worthwhile 7-inch tablets available cost $200 or so, this low figure is either an indication of very aggressive pricing or a not-so-great tablet. At this point, it is conceivable that a decent tablet come in under $200 as long as the manufacturer cuts the right corners. Barnes & Noble does it by eliminating cameras and GPS and Asus does it by scaling back on build quality. How did HP do it?

In some ways, it shouldn’t be surprising that the Slate 7’s design is bland. HP is great at design when it comes to high end products and equally as capable of producing generic devices for the budget buyers. The Slate fits into that latter category. It doesn’t come off as cheaply made, but the thick bezel surrounding the screen, chunky profile, and just heavy enough to notice weight marks the Slate 7 as a low-end device. The soft-touch back is nice and the red version looks nicer.

The Slate 7 is a smidge heavier than the Nexus 7, making it just light and thin enough to hold in one hand but a little on the heavy size for a 7-incher. Unlike Google’s tablet, HP’s has a microSD card slot for those who want more file storage. You can’t get at the battery, though.

Given that this is a low-cost tablet, some of these issues are to be expected. The adage “You get what you pay for” comes to mind.

Around front, edge-to-edge glass covers the 7-inch, 1024 x 600 pixel display. That low resolution is less than ideal, even for a small and inexpensive tablet, and does hurt the experience some. Screen contrast isn’t very deep either, so colors don’t pop and blacks aren’t as black as they should be. The Slate 7 got up to a reasonable brightness – viewing in the sunlight was tolerable – but if you push it to 70 percent brightness (or higher), images and video start to wash out. Viewing angles are narrow but not so much that playing games that utilize the accelerometer is unbearable. Due to the low resolution text isn’t sharp at small sizes and Android’s icons aren’t as crisp as they should be.

Given that this is a low-cost tablet, some of these issues are to be expected. The adage “You get what you pay for” comes to mind. Plus, for just $30 more you can get a number of tablets with far better screens such as the Nexus 7 or the Kobo Arc.

HP isn’t into skinning Android so with the Slate 7 you’ll get Android 4.1 Jelly Bean pretty much as Google intended. That’s good news for fans of Android, though it might be hard to enjoy the OS given the issues with the screen. There are elements of the OS that don’t look right – thumbnails in the Recent Apps pane, icons that look weirdly squished, and random incidences of tiny text, among other things. The news isn’t all bad. HP didn’t pre-load a bunch of annoying crapware; the only notable addition is HP’s ePrint app. Otherwise, you get the usual slate of stock apps: Gmail, YouTube, Google+, Hangouts, etc.

Despite the low resolution, the Google Play store recognizes the Slate 7 as a tablet, so you get access to tablet-only and tablet-optimized apps.

One way to set a low-cost tablet apart from the competition is to add something special and singular. For the Slate 7, that’s Beats Audio. This combo or software and hardware makes for some amazing sound on HP’s laptops and the ill-fated TouchPad could at least boast a higher class of audio quality. Listening to music via the headphone jack there is a noticeable boost in bass when Beats Audio is on. That’s fine for some music genres, terrible in others. Even that boost is not so memorable or audio-changing as to be worth building a brand around. Audio out of the two speakers on the bottom edge is as tinny and small-sounding as any other tablet.

If you’re listening to music, video, or games through headphones, Beats Audio makes that experience a bit better.

Having both a front and rear camera gives the Slate 7 some bragging rights over the Nexus 7 and the Nook HD. But if a camera is blah, is it even worth having? Tablet cameras rarely impress, but the 3-megapixel shooter on the back of the Slate is hardly worth using. When taking pictures in in a room lit overhead and with some sunlight coming in, the camera made it look like we were in a dank basement. The stock camera app has precious few settings, so there’s little help. Switching to Night mode at least made the objects in the picture clearly visible.

The front camera works for video chats in a pinch, but the person on the other end will see a pixilated, fuzzy version of you.

Inside the HP Slate 7 a 1.6-GHz dual-core A9 ARM Cortex CPU and 1GB of RAM run the show. This combination normally indicates decent performance in the Android realm. In this particular instance the performance is good enough for a $170 tablet and doesn’t rise above that distinction. Overall, things run smoothly on the Slate 7 and none of the apps we loaded failed to launch nor did we experience any crashing or other odd behavior. This tablet is not quite as smooth as the Nexus 7 when it comes to launching and switching between apps. While playing games we noted some lag in more intense titles; simple games like Fruit Ninja and Temple Run 2 didn’t give us performance issues. The problem when gaming is the lack of detail resulting from the low resolution.

Aside from the less than fancy processor, HP kept costs down by eliminating some less obvious features. There’s no GPS available and the Bluetooth version, 2.1, is several versions behind. You’ll be able to connect most speakers and keyboards, they just won’t be as efficient in terms of power and potentially speed. The 3500 mAh battery is smaller than you’ll find in some smartphones. It lasted a little over 6 hours with medium on and off usage and with heavy usage was down to under 15 percent at the 4 hour mark.

There aren’t many Android tablets under $200 worth your time. There’s a certain threshold to inexpensive slates – stay above it and value balances out with price and performance, dip below and you might as well have just flushed that money down a toilet. The HP Slate 7 is *just* on the wrong side of that threshold because of its display. It’s one of the most important elements of a tablet. When the screen isn’t any good, even decent performance and good audio can’t save the device. This isn’t some cheap tablet that’s going to crap out on you three months after buying it. It’s just never going to give you a great experience.

That’s probably what’s most disappointing about HP’s first foray into Android tablets. Given the company’s vast expertise in computing devices, it should have been possible to create a budget tablet that didn’t come with so many compromises. It’s confusing in the face of the next HP Android Tablet, the Slatebook x2, which actually looks decent and has a reasonable price. It’s almost as if these two products were made by two different companies.

For $170 you could buy the HP Slate 7 or you could spend just $30 more and get the Nexus 7 or the Kobo Arc. If your budget is seriously tight, the (currently) $130 Nook HD has a far better screen (though no cameras). Overall, the Slate 7 doesn’t offer the best value in this price range.

Topics
Video-editing app LumaFusion to get a Galaxy Tab S8 launch
OnePlus 11’s controversial design returns in new ‘official’ renders
Samsung Galaxy S23: release date, specs, price, and all other rumors
This ridiculous smartwatch has a hidden pair of earbuds inside
The best iPhone games to play in December 2022: Marvel Snap and more
The best Android games available right now (December 2022)
The most innovative tech products of 2022
How to unlock a phone on every carrier in 2022
This retro battery pack is way cooler than it has any right to be
Apple Health vs. Samsung Health? What I learned after using both
4 tech collabs we want to see on the OnePlus Featuring co-creation platform
Save up to $350 on the Samsung Galaxy Z Fold 4, Z Flip 4
Forget Apple’s newest iPad — the Galaxy Tab S8 should be your next tablet