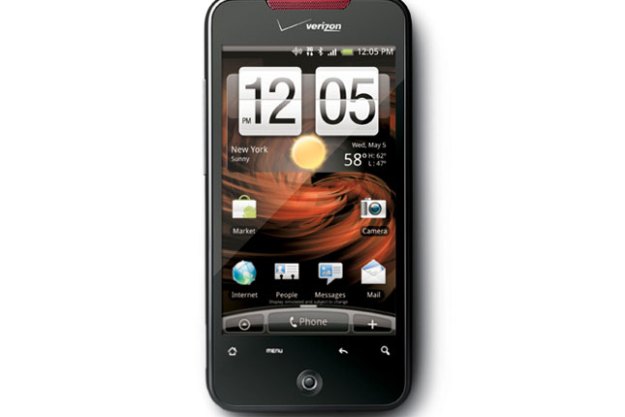 HTC’s Droid Incredible is essentially a jaguar-sleek version of the original Motorola Droid – comparatively the aging lion at this point. But the easily mockable moniker is not exactly appropriate. The iPhone was incredible. The original Droid was nearly incredible. This Incredible is more like the smooth, mature, professionally executed conclusion of all previous Android phones – the apex of the Android art. Apex – that would have been a good name. But it may not even live up to that description.

If you hold the original Motorola Droid and the Incredible side-by-side, there’s no contest, at least physically. Even though both occupy the same two dimensional area, the Incredible is about 13 percent thinner (0.47 inches deep to the Droid’s 0.54 inches) and more importantly, nearly an ounce and a half lighter than the pocket-sagging Droid. In some places, the Incredible is even thinner thanks to its sculpted, form-fitting rear cover, which is irregularly carved to match the battery compartment.

Both also run Android 2.1, which provides, among other things, seven roomy home screens compared to the Droid’s three. Tapping the Home key from any home screen gives you an iconic view of all seven.

Inside is where the Incredible raises the Droid bar. It’s powered by a swift 1GHz Snapdragon processor, compared to the Droid’s 550MHz engine, which means everything loads faster. YouTube videos load nearly a third faster on the Droid.

What the Incredible lacks is Droid’s slideout QWERTY, which is why the Droid is so bulky. Whether this is an improvement (beyond the weight issue) is a personal choice. If you don’t like touch keyboards, you won’t like the Incredible, especially considering its too-thin QWERTY in portrait mode, and vice versa.

The Incredible also includes an FM radio, lacking on the Droid. More importantly, Incredible includes 8GB of built-in memory, so you may be able to avoid prying open the battery cover to thread in a microSD card.

Like the Droid, the Incredible is largely devoid of external bulges and buttons. There’s a 3.5mm headphone jack, and a nearly flush power button up top, a similarly discreet volume toggle on the left perimeter, and that’s it. Touch keys for menu, back, home and search are positioned below the screen and above a tiny concave optical mouse, which functions like the trackpad on a laptop.

Both phones sport a similarly long 3.7-inch, 480-by-800 pixel display (The Droid’s LCD is actually 800 x 854), the Incredible shows off an AMOLED, which is theoretically brighter and more battery-friendly than LCD, although you won’t see much viewing improvement considering Droid’s stellar screen. The Incredible’s AMOLED is a bit glossier, brighter and more colorful than Droid’s also excellent LCD, but these are slight differences perceived only by holding the two screens side-by-side.

Getting to the actual phone on the Incredible is easier than on the Droid, where “phone” is treated as another app rather than as a permanent part of the bottom of all the home screens. While the Incredible doesn’t merge Facebook data (such as a photo of the contact and profile info) in the address book as Droid does, you do conveniently get designated favorite callers atop the dialpad and a scrollable contact list that has to be clicked through separately on the Droid.

The Incredible’s phone quality is not good. Voices sound scratchy and filtered at both ends of calls, a far cry from the Droid’s clean, landline-like reception quality. The phone’s volume toggle is also nearly too flush to the phone, making it difficult to manipulate by feel while on a call.

In sort of a mini take-off on Motorola’s Motoblur, the Incredible includes something called Friend Stream, which unifies your Flickr, Facebook and Twitter streams in one place. But these three streams are so disparate, we’re not sure this is as handy as it sounds.

Although both phones offer the same intuitive browser, the Incredible’s pages are presented against a strange, low-contrast blue-gray-white background, while the Droid’s egg white platform. But the Incredible’s pages snap into view around twice as fast as Droid’s. Articles pop up in around two seconds from CNN’s home page, for instance, and The New York Times home page loaded in three seconds flat, two or three seconds faster than on the Droid.

While an 8-megapixel camera may sound impressive, the Incredible continues the stupid tradition of tiny plastic lenses and digital interpolation, which spoil what could be reasonable replacements for a standalone digital camera. Not that the Incredible doesn’t take bright, colorful – and big – pictures, but details are digitally smudgy, Exhibit A why measuring photo results by resolution is dumb.

Although it has a dual-LED flash bright enough to overpower indoor subjects that wander too close to the lens, a dedicated external camera shutter button would have been nice; it’s hard to keep from blurring indoor shots having to touch the screen or optical mouse to take a shot.

Better is the Incredible’s video recorder, which captures 800-by-480-pixel MPEG-4 footage. While not HD, clips blow up full screen a bit smudgy, but remarkably clean of the usual excessive pixelation.

Even though AMOLED technology is supposed to result in, among other things, better battery life, Droid shockingly trumps Incredible by more than an hour in rated talk time (6.4 hours for Droid, although we got a lot more than that in our informal tests, vs. 5.2 hours for Incredible, which we surpassed by around an hour), and nearly twice as much standby time (270 vs. 149 hours). That’s an amazing and disappointing disparity, and means a higher chance of your Incredible not making it through a day without needing a boost.

The Incredible is a superbly executed amalgamation of nearly every technology a cell phone buyer might want. It’s light, it avoids overdosing on external controls, it’s got a big and beautiful AMOLED screen, it’s intuitive without any glaring annoyances, it’s got a good-to-great camera, a wicked quick Web browser, and Android’s most state-of-the-art OS. But the Incredible’s poor voice quality and unexceptional battery life makes it a tough choice over the heavier, but far better-sounding and longer-lasting Motorola Droid.