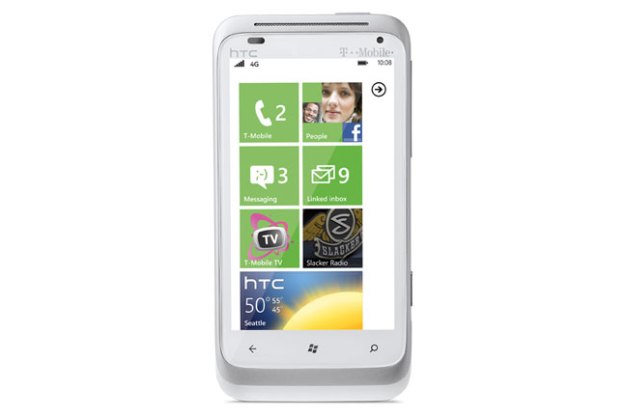 “The HTC Radar is comfortable to hold, looks great, and has a solid camera for its class. We like it.”

T-Mobile users, you now have a second Windows Phone to choose from, and this one looks a lot nicer. The HTC Radar 4G is a part of Microsoft’s wave of four or so new Windows Phone 7.5 (Mango) devices to hit the market and we think it’s the best looking of the bunch. But its affordable price tag comes with a few downsides.

Where it relates to design, the HTC Radar is both comfortable to hold and pleasant to look at. Almost every phone seems to be a big black brick these days, so it’s nice to see a silver-and-white brick hit store shelves too. The Radar follows a similar design philosophy as the HTC Amaze 4G, but it doesn’t give up on the silver and white color scheme on the front. Unlike the Amaze, the Radar has a white border around its screen. This might look odd, but the company used a white background on Windows Phone 7.5, so the whole package avoids black, except when the screen is off.

The metal casing is tight and fits extremely well in the hand. We also appreciated the extra-long volume rocker and power buttons, which make listening to music and unlocking the phone a breeze. A micro USB port and camera button adorn the lower sides of the phone.

The only issue we’ve had with the Radar’s design is the removable plastic cover on the bottom of the phone. On our unit, it doesn’t seem to fully snap on, leaving an unattractive gap around the bottom of the phone. Removing this cover automatically turns off the phone too, which is odd, especially considering that the battery is not accessible or removable. We also wish the phone had a microSD card. Nothing hurts like running out of memory.

With a 3.8-inch screen, this phone is smaller than most, but we found that it was just big enough to get the job done. A 3.7-inch screen seemed cramped on the Samsung Focus Flash, but the extra fraction of an inch here feels more comfortable, somehow.

For more photos of the HTC Radar make sure to check out our photo gallery.

Here’s where our big problem with the Radar lies. Though it costs $100, the Radar is running the same specs as Windows Phones that came out last year. It has a 1GHz Snapdragon processor (single core), 512MB of RAM, 8GB of internal storage, a 5-megapixel rear camera, a .3-megapixel (VGA) front camera, and a 480 x 800 pixel screen. All Windows Phones are still behind the curve, as none of them have LTE 4G connectivity or dual-core processors, but most have at least a 1.4GHz processor. It’s a bit sad that HTC didn’t upgrade the Radar 4G at all. Complex apps routinely take a bit longer to load than they would have to on a device with a faster processor or more RAM.

HTC’s choice to stick with LCD screens is beginning to baffle us, as Super AMOLED screens are taking over, but with the Radar, the manufacturer has turned the weakness of its screen and flipped it to an asset. Previously, all Windows Phones have used black backgrounds. No other smartphone screen technology can match the awesomely deep blacks and saturated bright colors of AMOLED.

Samsung uses AMOLED in all its screens and Windows Phone 7.5 looks amazing on them because of its reliance on solid colors and blacks. Next to a Samsung device, HTC’s S-LCD Windows Phone screens have washed out, almost gray backgrounds (honestly, they aren’t too bad, but side-by-side they can’t compare). However, the reverse is true for whites. LCD seems to be able to display much brighter whites than AMOLED screens. So next to an AMOLED Windows Phone with a white background, HTC’s white Radar looks fantastic. Kudos to HTC for finding a strength in its technology.

The HTC Radar runs Windows Phone 7.5 (Mango). If you haven’t tried a Windows Phone before, you need to spend some extended time with one. The OS is more intuitive to use than Android for certain, and next to iOS, which is showing age, it feels like a fresh start for smartphones.

It’s difficult to live without all those Android and iOS notifications at first, but after you customize your start screen, you quickly realize that Windows Phone Live Tiles are expressive and informative enough to do the job without the Android-style drawer of notifications. Live Tiles are kind of a mixture between an icon and a widget. They are all the same size and sit in a grid, but they can display anything. Our Gmail Live Tile shows how many emails we have while the Weather Channel app will show us the weather without having to open the app. One benefit of Mango is that now you can “pin” screens within apps to the home screen. For instance, we pinned some of our favorite playlists and podcasts to the start screen. As developers update their apps to take advantage of Mango, which only just came out, the uses for pinning will rise.

Windows Phone is where design is headed. It’s probably the cleanest OS Microsoft has ever made. As proof, look no further than Google’s Ice Cream Sandwich update to Android. The new version of Google looks and acts a lot more like Windows Phone than anything else.

As a side note, HTC and T-Mobile have included a predictable assortment of apps like My T-Mobile Account, T-Mobile TV, Slacker Radio, HTC Hub, Tango, and a few others. Fortunately, most of these apps are removable (unlike Android). The Windows Phone Marketplace has most of the major apps you’ll want to use, or a good substitute for them, but it’s not as expansive as the Android Market or Apple App Store.

We’ve included a few pictures here to demonstrate how well HTC’s cameras perform. The Radar’s camera isn’t as good as the Amaze 4G, but even at 5 megapixels and a slower auto-focus and shutter speed, it still outperforms most any other camera phone that we’ve used. We were particularly impressed by how well its flash filled a room without draining it completely of color. Nighttime and indoor pictures came out looking good as well. When in pitch black, the camera cannot focus itself, so your pictures will become increasingly blurry, but it was able to focus a bit in very dark conditions. For a 5 megapixel camera on a $100 phone, the performance was better than we expected. The camera outperforms Samsung’s Focus Flash.

Keep in mind that, like all Windows Phones, the Radar also has a dedicated camera button and by holding it, you can take a picture without having to unlock the phone first. Android and iOS have mimicked this feature.

Video recording is adequate and comes in at 720p and the front-facing camera does its job, but not skillfully — it has but a mere 0.3MP (VGA) to work with. But who uses the front camera anyway?

We made quite a few calls on the Radar and found it to be easy to hear and be heard. A weekly staff conference call was noticeably easier to understand than on our old Motorola Droid, so those of you upgrading from an older device, you should see a slight uptick in call quality.

The HTC Radar is capable of accessing T-Mobile’s 3G HSPA+ 14.4Mbps network (they call it “4G”), but we haven’t had any luck attaining speeds that high. In Manhattan, New York, we’ve been getting about 1.5Mbps download speeds and 100-500Kbps upload speeds. With the Amaze 4G, we at least got spurts of 10Mbps downloads, but we’re not seeing it here. However, T-Mobile’s network is different in every market, so the only way to know is to test out a phone in your area.

The Radar’s battery life is nothing to gawk at, but it’s certainly not impressive either. The phone holds a charge on idle better than the Samsung Focus Flash, but drains quickly when Wi-Fi is activated. Like most smartphones, you’re likely going to have to charge this one every day. HTC claims that the Radar can get 8 hours of talk time or 22 days of standby, but the 1,520mAh battery does not hold up that long in actual use conditions.

Despite its weak hardware specs, the HTC Radar 4G is worth a look. We recommend buying it on sale at $50 or less, but give it a try if you’re in the market for a T-Mobile smartphone. The Windows Phone experience will grow on you and has a lot of strong advantages over Android. There’s something to be said for an operating system and device that feels pleasant to use. The Radar is comfortable to hold, looks great, and has a solid camera for its class. We like it.