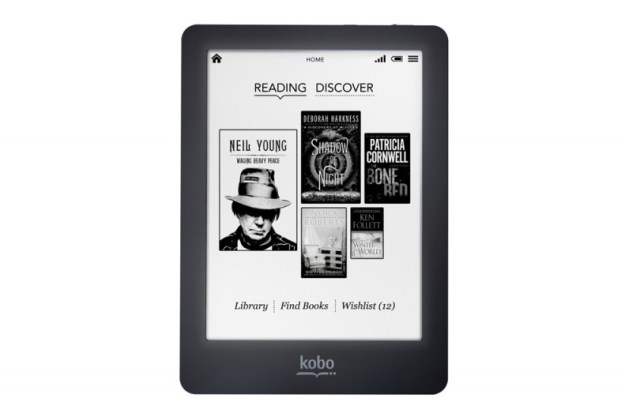 “The Kobo Glo's lighted e-ink display is better quality than the Kindle Paperwhite and the Nook with GlowLight, but the e-reader's other attributes may not be enticing enough to lure e-book lovers away from the big boys.”

Like David Hasselhoff, Kobo e-readers are “popular in Europe” though not always considered real contenders in the United States. That’s usually because the company’s e-readers are often almost great, but not quite, and are a bit more expensive. For instance, the Kobo Glo costs $130, $10 more than the Nook and Kindle with lighted screens. But is the Glo competitive with these more popular devices? In some ways, yes.

The Kobo Glo is about the same size and weight as the Kobo Touch and has the same basic design as every other Kobo e-reader that’s come to the United States. The Glo’s back is less pillowy than some models and isn’t removable, so you can’t exchange backplates, though you’ll be tempted due to the neon coloring. And it does still have a soft-touch coating that makes it comfortable to hold and harder to let slip.

Like the Kobo Touch, the Glo is all touch-based. There are only a few buttons: the power slider up top and a button for turning the light on and off. Unlike the Kindle Paperwhite or the Nook with GlowLight, there’s no on-screen way to turn on the light. However, when the light is on, you can adjust the brightness on screen.

The only two ports are a microSD reader on the left edge that takes cards up to 32GB and a Micro USB port on the bottom for charging and connectimg to a computer.

It isn’t the most attractive or most elegant e-reader in the world, but it’s comfortable to hold in one hand and you can operate it without needing a manual. Win, win.

The Kobo Glo’s 6-inch Pearl E Ink touchscreen’s contrast ratio is very close to the Kindle Paperwhite, which is currently the best among this type of e-reader. Depending on the font, text is bold and dark, and even looks good when the font size is small. Though the resolution is a decent 1024 x 758 pixels, the edges of letters sometimes don’t render as crisply as we’d like – again, depending on the font. There are eight font faces and 24 sizes, so you’ll have a wide range to choose from. You also get control over line spacing, margins, and justification so you can tweak everything until you find the perfect balance.

Turning on the light (Kobo dubs it the ComfortLight), the first thing we noticed is that it washes out text somewhat. It’s less evident on heavier fonts but gets more pronounced the higher the brightness. Luckily, you don’t need to turn the light all the way to 100 percent, even in dark rooms, as it’s very bright. It’s brighter than the Kindle Paperwhite’s brightest setting, but that doesn’t necessarily make it better. The Glo’s light is harsher than the Kindle’s, even when you bring it down to a comparable setting. Even in very dark rooms, you’re better off keeping the slider set at the midpoint.

Still, the Glo’s light is even and consistent across the screen and doesn’t suffer from the weird lighting issues that plague the Kindle and, to a lesser extent, the Nook Simple Touch with GlowLight.

Flipping pages takes a light tap or swipe and the page changes quickly with no flashing (when the screen goes black for a second) except every six pages. You can adjust this to a different number in Reading Settings. You can also change the tapping/swiping zones. This is useful if you tend to hold your e-reader in one hand. If you want to just use your left hand, for instance, you can expand the area where it registers a tap or swipe for paging forward. That means even if you have small hands, you won’t have to stretch your thumbs.

The slate of reading extras on offer is pretty basic: dictionary lookup, notes, highlights, bookmarks, search in book, and sharing passages on Facebook. Kobo doesn’t offer anything as fancy as X-Ray on Kindle. We like the included translation dictionary. With it users can translate words to and from English, French, German, Italian, Spanish, and Portuguese. Very useful if you come across a word or phrase in a book that the author declines to translate for you.

Other than e-books, the Glo also reads PDF, RTF, and TXT files. Dealing with PDFs can be a pain if the text is small and you need to zoom in to read it. The Glo doesn’t do reflowable text, so you’re left with having to move the page on the screen if the zoom is high. It’s not the best experience. Text and Rich Text Files work like e-books, allowing users to change the font, text size, margins, etc., and flip pages normally. If you have the choice of converting a document into PDF or RTF, choose the latter.

The first time you turn on the Kobo Glo it will do two annoying things: run a software update before you can get to the interface and start downloading all of your Kobo books. It’s possible to halt the latter so that you don’t end up with every book you’ve ever bought (and probably finished) on your device. After the initial setup, adding a book you’ve bought online, on another Kobo device, or via the app is simple. All books sync to any device connected to your account.

We suggest you search for and buy new books via the website since shopping on the Glo can be a trying experience. If you simply want to browse recommendations or reading lists, the interface won’t hinder you. However, searching for books is less than ideal, especially if there’s more than one edition of the book in question. The list of results only contains the cover, title, and author, but not the price. The Kobo library contains free or low-cost versions of classic books, but good luck finding them via the Glo. There’s no way to sort searches at all.

Kobo boasts that it has one of the largest e-book stores in the world and that over 1 million of its titles are available for free (this usually includes books in the public domain). The selection may not rival Amazon’s when searching for modern titles that are more than five years old. Most new books, including bestsellers, that come out in electronic format will come to Kobo’s store and at the same price as Amazon, Barnes & Noble, and other big players. But very few books are exclusive.

The Kobo Glo is compatible with EPUB files (the current e-book standard) plus PDF, RTF, TXT, and HTML files. It can handle e-books with no DRM or Adobe’s DRM scheme. This means that users can load books from other stores (using the Adobe Digital Editions program for Mac/PC) such as Barnes & Noble, Sony, and Google, and from libraries that offer e-book lending.

Kobo promises over 70 hours of continuous usage with the ComfortLight on and the Wi-Fi turned off. We used the Glo for over a week with the Wi-Fi on and near continuous usage of the light and the battery only got down to about half. Depending on your reading habits, the Glo will last anywhere from a few weeks to a month. Heavy readers will get at least a week, likely more. Though that’s not a record for an E Ink device, it’s definitely good for an e-reader with a built-in light and Internet connectivity.

At $130, the Kobo Glo costs $10 more than the Nook Simple Touch with GlowLight, $10 more than the Kindle Paperwhite with ads, and $10 less than the Paperwhite without ads. Its biggest win is that the Glo’s light is evenly distributed across the screen, something neither the Nook nor Kindle can claim. Text washes out somewhat with the light on, though not so much that it completely ruins the reading experience. The Glo doesn’t offer as many extras as B&N or Amazon do inside of books, but is solid on the basic features that e-book readers want. Plus, owners aren’t limited to one major bookstore (plus a handful of smaller ones) like they are on the Kindle.

Overall, the Kobo Glo is a decent e-reader with good features and an average design. It doesn’t score a definitive win over the Nook or Kindle, but it is competitive in a way previous efforts from the company weren’t.