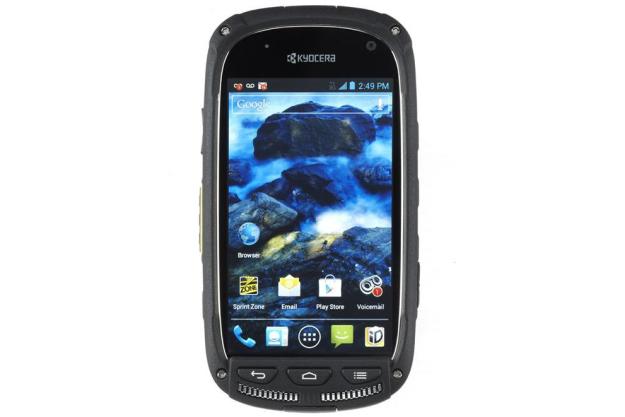 “The Kyocera Torque isn't the most powerful smartphone, but it’s ruggedness, long battery life, and good call quality makes it a great choice for anyone who needs a tough phone.”

Cracked screens are common and a good rainstorm would wreck them, but most people seem okay with the fragility of their phones. But if you work in hazardous environments or outdoors, you need a phone that can keep pace. The Kyocera Torque is endorsed by no less an adventurer than Bear Grylls (remember that guy?). This isn’t the most attractive Android phone you’ll see on the shelves, and it doesn’t have top of the line specs. Given that it’s currently available for free on Sprint (with a contract), neither of those things might matter as much as the fact that it will likely hold itself together if you happen to toss it at a wall. But is it worth your renewal? Find out below.

Rugged phones aren’t meant to look pretty, though the Torque is by no means an ugly monster. It looks the part of a rough and tumble device thanks to the thick casing, called Dura-Grip. This shock-resistant material will protect the phone from minor and major drops. It’s also fairly grippy. Both the headphone and USB ports have covers, and the Torque’s many buttons are all sealed, protecting them from water, dirt, and wind. The 4-inch screen sits in a shallow well so dropping it face first on concrete won’t spell the end of your screen.

However, putting it in that well means it’s sometimes hard to get a finger on the edges of the screen when you need to, like when swiping the Notification bar up or moving an icon from one home screen to another. There isn’t much bezel.

Kyocera shoved as many buttons as it could on the top and side edges of the Torque. Because of this, we often pressed buttons without meaning to, which grew frustrating. The camera button on the right is well placed and the Power button up top is easy to reach. The Direct Connect speaker on/off button is also here (Direct Connect is like Nextel service), and the DC activation button is on the left edge below the Volume rocker.

We often pressed buttons without intending to, which grew frustrating.

The Direct Connect button is in the perfect place for easy pressing but is also in the perfect place for accidental pressing. Too often we hit it when going for volume. Home, Back, and Menu navigation buttons sit under the display even though this is an Ice Cream Sandwich (Android 4.0) phone, which doesn’t require them. We can’t disagree with the idea of physical buttons, though. When trying to find your way through a blizzard it’s much easier to find physical buttons than on-screen ones.

A lock keeps the backplate sealed tight against water. Underneath is a user removable battery and the SIM and microSD card slots.

Rugged phones often don’t have high-end displays and the Torque is not the exception. The 4-inch screen has an 800 x 480 pixel resolution, which is serviceable for Android and okay for reading Web pages and e-books. What’s great about the screen is how bright it gets. Even out in harsh sunlight or blinding snow, you’ll still be able to see the display clearly. (We didn’t test the snow as there were no blizzards in NYC in May, but we stand by the claim!) It should make a great light when you’re navigating your way through a dark cave, too. (Again, we can’t actually verify that.)

The Torque is a tough device, and Kyocera boasts that it meets IP67 and Military Standard (Mil Spec) 810G for dust, shock, vibration, extreme temperatures, blowing rain, solar radiation, salt fog, humidity, and immersion in water up to 3 feet. We couldn’t test every one of these scenarios, but we did do extensive drop and water testing. We dropped the Torque from a number of heights representing multiple scenarios – a drop from a table, a pocket, our hands while using – on surfaces ranging from hardwood floors to thin carpet, and even concrete. The Torque was unmoved and mostly unscathed. When tossing it a few feet away, the battery cover popped off at the edges but not fully. The screen stayed free from scratches even when we dropped the phone face first.

The Torque also survived multiple 30-minute sessions under water and worked just fine when we took it in a shower. The port covers and back plate sealed off all the important areas and kept them dry.

Kyocera didn’t mess with Google’s interface for Android 4.0 Ice Cream Sandwich, so the experience is pretty close to what you’d get with a Nexus phone. There are a few extra utilities and services thrown in and, of course, Sprint’s apps. Thankfully, the Torque isn’t overloaded with crapware.

Since the Torque is aimed at adventurers, the inclusion of Qualcomm’s IZat enhanced location services makes sense. Trapped on a mountain? With this you should be able to let rescuers know exactly where you are before that mountain lion gets you. This phone is also a good one to give to kids since they can’t easily break it by being careless. We tested Sprint’s Safely Family app, which provides parents with mobile controls and keeps teens from talking or texting while driving. It appears to work pretty well.

Another utility worth mentioning is the Eco Mode for extending battery life, which gives users multiple ways to conserve energy beyond just brightness and underclocking the processor.

The 5-megapixel camera on the back is a decent enough shooter for an inexpensive phone. The pictures it produces aren’t very detailed or color-rich but are mostly accurate in the color department. Though it has a hardware shutter button, the Torque isn’t very fast, so unless your subject is standing pretty still you might encounter some blur.

The 1.3-megapixel front-facing camera is decent enough for video chats as long as you’re in good lighting.

The Torque runs on a 1.2-GHz dual-core Qualcomm Snapdragon MSM 8960 processor backed by 1GB of RAM and just 4GB of internal storage. Since less than 2GB of that is available to the user, you should invest in a microSD card if you want to install many apps or have any media on the phone. This hardware combo earned a score of 4,053 on Quadrant. That’s well below both the Pantech Discover and the HTC First and explains why playing casual games like Diner Dash and Grabatron took a little more effort than they should. Most Android apps won’t give the Torque any trouble, but this is not a phone you can push to the limit on the inside as much as you can on the outside.

Connectivity includes Wi-Fi, Bluetooth, NFC, and GPS plus access to Sprint’s small 4G LTE network and 3G when that’s not available. In our testing area, New York City, Sprint’s LTE is not officially active. On 3G we saw decent speeds for the network.

One of the nicer features on the Torque is the bone conduction technology employed in the earpiece. It makes for very clear calls even in noisy environments. You can actually hear a phone call through a helmet or by touching the phone anywhere on your head. Callers on the other end reported that our voice came through clear as well.

Another interesting extra is Direct Connect. This is the first of Sprint’s LTE phones to support this push-to-talk feature, which works similarly to the old Nextel one. This version runs on a different network but acts the same – just tap the button on the side to connect instantly, and then have walkie-talkie style communication with one or up to 20 people. Direct Connect also includes audio alerts and the ability to send text messages to other subscribers. It’s great for keeping a team of spelunkers in contact or for ensuring your kid can always reach you instantaneously.

With the speaker on, voices come through quite loud, both for DC and regular calls.

The 2500mAh battery lasts an impressively long time, giving us over 13 hours on medium to high usage with no battery saving methods. With Eco Mode and Kyocera’s MaziMZR (which shuts down background data on apps you don’t use much) you can get a lot more battery life.

The Kyocera Torque isn’t the fastest Android smartphone around and probably won’t appeal to those who want a top-of-the-line iPhone or Galaxy S4. However, the rugged aspect combined with long battery life and good call quality makes it a great phone for the target audience. The free (with contract) price also helps. If you can ignore some of the clunkier design elements, the Torque is a great companion for that treasure hunt you’re planning.