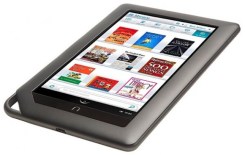 According to documents obtained by Engadget, it appears that speculation about Barnes & Noble unveiling a new tablet next week has turned out to be correct.

The website claims that the book giant will introduce the Nook Tablet, set to go on sale on November 16 for $249, $50 more than its direct competitor, Amazon’s Kindle Fire.

Engadget, which called the new tablet “a dead-ringer for the Nook Color,” reports that the Nook Tablet will sport a 7-inch VividView IPS color touchpanel with a 1024 x 600 screen resolution.

It’ll be powered by a 1.2GHz dual-core OMAP4 processor, have 1GB of RAM and 16GB of in-built storage (expandable thanks to a microSD slot).

The report claims the new tablet will be 0.48 inches thick, which is a fraction thicker than the Kindle Fire at 0.45 inches, although at 14.1 ounces (400g) the Nook will weigh slightly less than the Fire, which tips the scales at 14.6 ounces (414g).

Battery life is thought to be around eight hours with Wi-Fi turned off, though this’ll drop to four hours if video is running. There’s no mention of the OS but it should be a version of Android.

So will consumers on the hunt for a competitively priced tablet be prepared to fork out an extra $50 for the Nook Tablet, or go instead for the $199 Kindle Fire?

For the extra $50 consumers will get double the RAM, double the internal storage, and a memory expansion slot.

Two other factors will likely sway consumers. First, they’ll be keen to get hold of the devices to see how each one functions and feels in the hand. And second, they’ll want to take a close look at what each tablet offers in terms of content and extras. On Wednesday, for example, Amazon launched the Kindle Owners’ Lending Library which allows owners of its e-readers and Fire tablet to borrow a book a month for free if they join Amazon Prime for $79 a year. The deal also gives members access to around 13,000 movies and TV shows. As for Barnes & Noble’s tablet, from the obtained documents it looks as if it’ll be loaded with Netflix, Hulu and Pandora apps.

Of course, it’s quite possible consumers will shun both devices and opt for Kobo’s $199 Vox tablet instead.

How to take a screenshot on any Samsung Galaxy tablet