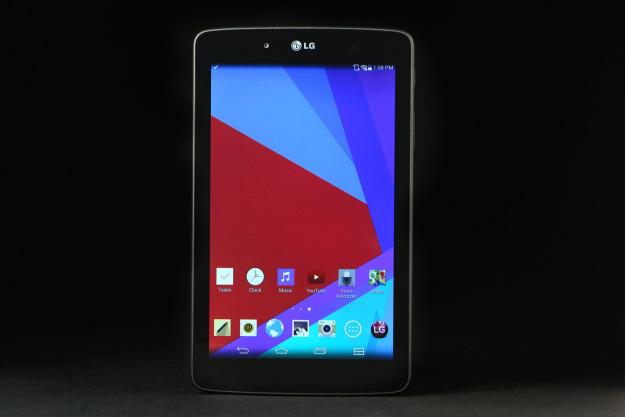 “The LG G Pad tablets won’t win any awards for best tablet, but they are decent, mid-range devices that will perform most basic tasks well.”

There are more mid-range Android tablets available on the market than anyone can count. LG’s new G Pad lineup brings three more to the table with the G Pad 7.0, G Pad 8.0, and the G Pad 10.1.

The three tablets sport nearly identical specifications and the same basic design. Each tablet serves a different purpose: The 7-incher is ideal for reading and little else, the 8-incher works well for browsing the Web, and the 10-inch model works best as a video player and productivity device. We’ve reviewed the 7 and 10-inch versions so far.

Which one is right for you (if any)? Read on to find out.

LG kept the design and feel consistent between the three new G Pads. The tablets all feature a plain, matte back with a satiny, slightly rubbery texture that grips tables well and avoids fingerprints.

The G Pads are thicker than most other tablets, coming in at around 0.4-inches. In contrast, Samsung’s Galaxy Tab S line is just 0.26-inches thick. It may not sound like a lot, but if you want to to hold the tablet one-handed, like you would with the G Pad 7.0, for example, it matters.

The thick bezels around the displays also adds extra width to the G Pad 7.0, making it less comfortable to hold in one hand than a 7-inch tablet should be. The extra space doesn’t matter too much on the larger G Pad 10.1, though.

Android KitKat looks nice with a few touches from LG

LG’s G Pads come with Android 4.4.2 KitKat pre-installed. The interface is neat and clean with few major changes from the way Android normally runs and looks.

The South Korean manufacturer did add a few cool features like Q Pair 2.0, which allows you to connect select Android smartphones to your tablet for viewing important info on the big screen. Using this Dual Window mode, you can check Google Hangouts while you watch a YouTube video or browse the Web. There’s even a dedicated button on the touchscreen for this feature located right next to the Menu button.

To open two apps at the same time, simply tap the button and a selection of apps pop up. Then, you can select the apps you want to see. Once they pop up, you can adjust the size of each window to your liking. Although Dual Window is available on both the G Pad 7.0 and 10.1, it’s much more functional on the bigger tablet.

The G Pads also have LG’s great security feature, Knock Code, which lets you set a specific pattern of taps on the screen to unlock your device.

Average specs get the job done

Even though the display isn’t Full HD, it actually looks pretty good while watching videos on YouTube or Netflix. The lack of extra pixels is slightly more noticeable on the larger, 10.1-inch G Pad. If you like to watch 1080p movies on your tablet and you’ll be upset with a lower resolution, the G Pad 10.1 is probably not for you.

LG popped a 1.2GHz quad-core Qualcomm Snapdragon processor and 1GB of RAM inside of the three G Pads. In benchmark tests, the G Pads performed better than the Nexus 7 2013 and the Nexus 10, but much worse than high-end tablets like the Samsung Tab S lineup.

The G Pad 7.0, is less comfortable to hold in one hand than a 7-inch tablet should be.

The smallest model only comes with 8GB of internal storage, but the 8.0 and 10.1 both feature 16GB storage. We highly recommend you start with at least 16GB. Luckily, all three have MicroSD card slots for expansion.

Just like almost every other tablet in the world, none of the G Pads take particularly great photos. The quality is invariably grainy and the colors get washed out. But then again, most people don’t take pictures with their tablets anyway.

LG’s G Pads may not have full HD displays or super-fast processors, but they do have very large batteries onboard. The G Pad 10.1 comes with a massive 8,000mAh battery, while the smaller 7-inch G Pad features a sizeable 4000mAh battery. Both tablets last around 10 hours or more, depending on how heavily you use them.

These tablets have a one-year limited warranty that covers defects in the product itself. You’ll have to get a separate warranty to cover damage.

The LG G Pad tablets won’t win any awards for best tablet, but they are decent, mid-range devices that will perform most basic tasks well.

The G Pad 7.0 is a good choice for those who want a 7-inch tablet to read with, browse the Web, and watch a few YouTube videos. At around $150, it’s about $80 less than the Google Nexus 7 and $130 less than the iPad Mini. If you want a Full HD display, better processing power, and a more high-end design, the iPad Mini is a better choice. However, if you just want a nice, mid-range tablet, the G Pad 7.0 will work for you.

Meanwhile, the G Pad 10.1 is somewhat less desirable. If you’re going for a large tablet, a 1080p display, or better, makes sense because the larger screen is optimal for watching videos. LG’s 10-inch device doesn’t deliver on that very important note. That said, it’s still a bargain for a 10-inch tablet at around $250. If you don’t mind a regular display, the G Pad 10.1 is an excellent deal for such a big tablet.

Does the Samsung Galaxy Z Fold 4 have an SD card slot?