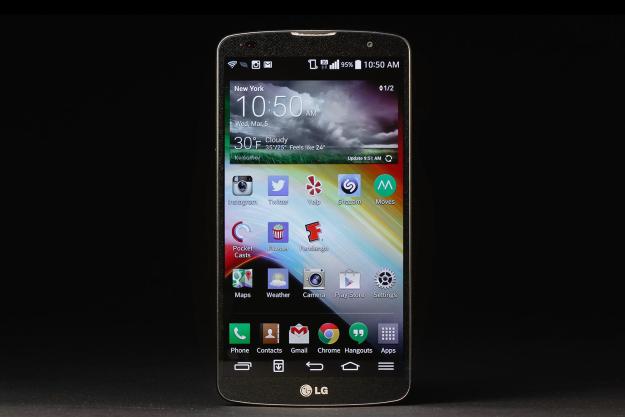 “The G Pro 2 is another great phablet from LG, and is a point-for-point draw against the Galaxy Note 3.”

Big phones are on the rise, and these days, the bigger the screen, the more people want to scoop them up. We aren’t always fans of phablets here at DT, but we’ve long stopped complaining about them. Some of you like your phones extra large, and we’re not about to stop you. If you’re looking for a good phablet (that’s phone + tablet, a play on words!), you may want to consider LG’s new G Pro 2. After using it on a couple different continents, we think it’s a great option next to the four major phablets on the market today, though we’re not sure we recommend it over LG’s own G Flex.

The phablet category is not for the faint of heart. If you spend all day worrying that you’re going to drop your phone, don’t buy a phablet because chances are, you will drop it. We’ve only had the G Pro 2 for a week, but we’ve already dropped it on a concrete sidewalk once.

The G Pro 2 is still thin and small enough to fit in a guy’s front pocket, but like it’s competitors, it’s on the edge of being too large to use.

We pulled the phone out of our pocket on the street to access a map, held it with one hand, and halfway through unlocking it with our KnockCode (more on that soon), the phone just slipped out of our hand. All it took was the startling sound of a moped racing past. Like all accidents, it happened both in slow motion and too fast to recount. Luckily, it only took a few scratches and the battery cover and battery popped out. The screen came out uncracked. The G Pro 2 isn’t extra durable, but the plastic back does repel falling damage more than a glass or metal back might.

The point is that it’s more difficult to keep hold of a big phone like the 5.9-inch Pro 2. Keep that in mind. If you prefer a better grip, there are smaller Android models like the 5.2-inch G2 and Motorola’s 4.7-inch Moto X (the most comfortable phone we’ve held).

Having said all that, there are a few things that make the G Pro 2 more comfortable than most phablets. One is the button placement: LG now puts power and volume buttons on the back of the phone. It takes a little getting used to, but it makes the buttons easier to access. The G Pro 2 also sports an industry-leading thin bezel – that’s the space between the screen and the edge of the phone. This lets LG pack a larger screen into a phone about the size of a Galaxy Note 3. It’s also very thin, at only 8.3mm, or a third of an inch.

Overall, the G Pro 2 is still thin and small enough to fit in a guy’s front pocket, but like it’s competitors, it’s on the edge of being too large to use. Be sure to try out a big phone before you order it. If you’ve used and enjoy the Galaxy Note, then you’re in good shape.

KnockCode, a new, but slow way to unlock your phone

The other fun trick you can do with an LG is wake the phone up by just tapping on the screen twice. This feature is called KnockOn and works because LG keeps the touch layer of the screen turned on even while the phone is sleeping. We love KnockOn, and for the G Pro 2, LG created KnockCode, which adds security. You can create a custom tapping code using all four quadrants of the screen, then tap that pattern when the phone is off to unlock and re-awaken it. LG claims there are more than 80,000 combinations to try, making it more secure than a four-digit pin.

At first, we liked KnockCode, but it grew tiresome.

At first, we really liked KnockCode, but because LG forces you to re-enter the code even if your phone screen has been off for only a few seconds (and the G Pro 2 defaults to turning off every 30 seconds), it grew tiresome. All of these new security features slow down our use, and when we were periodically looking at maps of a city to get around, trying, and failing, then succeeding, to unlock the phone grew tiresome. The response time needs a boost.

Overall, we still love KnockOn. Double tapping the screen to unlock the phone is great, but KnockCode, as safe as it is, annoyed us. Once we turned it off and went back to double tapping, we were a lot happier.

LG hasn’t changed the basics of its interface this time around. The G Pro 2 runs Google’s Android 4.4 KitKat operating system (the newest version), but everything looks familiar. Well, familiar if you are a reviewer who uses LG phones frequently.

Mostly, LG’s interface looks a lot like Samsung’s, so if you’ve used a Galaxy phone, you will understand things pretty quickly. It has home screens, an app menu, a nice weather widget, and access to Google’s Play Store, which has more than a million apps to download.

There are areas of the interface that are too cluttered, and the Notification tray is one of them. It’s so full of QSlide apps (little mini floating apps you won’t use much) and dials that there are no room for actual notifications. We fixed this by tinkering with the settings (swipe all the way right on the Wi-Fi toggle menu to edit what appears here) and turning stuff off.

Unlike Samsung, which dialed back the number of apps it preloads on the phone with the Galaxy S5, down to roughly 45, LG is still pushing 80 pre-installed apps. We really hope this is trimmed down because there is only 32GB of space to work with.

Finally, we also like the ability to customize the on-screen navigation buttons. In Settings, you can add up to five buttons on the bottom. We had the normal Home, Back, and Recent Apps buttons, but also added a Menu button and one that auto pulls down the Notification tray because it’s hard to reach sometimes.

Let’s get a few of the important points out of the way.

Specs: LG is pushing the G Pro 2 as a high-end phone. Though it’s 2.2GHz Qualcomm Snapdragon 800 processor is no longer the fastest (there’s an 801 now), it still holds its own. It’s 3GB of RAM, 32GB of storage, and 1920 x 1080 pixel LCD screen don’t hurt its case, either. It held up great in our benchmark tests and even nabbed a 20,000+ score in Quadrant, which is great. We haven’t encountered any slow downs during use. It’s speedy. It does have a MicroSD slot and removable battery, too.

Talk: We’ve done several interviews on the G Pro 2 and haven’t had any trouble hearing or being heard – or any more than normal. The Pro 2 has standard talking capabilities.

Battery life: Our first two days with the G Pro 2 were not fun, battery wise. Unfortunately, we made the mistake of installing the Moves app to track our steps, which drained the battery very quickly. Once we uninstalled it, the Pro 2 and its big 3,200mAh battery (twice the size of an iPhone) held it’s own. During normal use, the Pro 2 should be able to get two days of battery life. Just don’t install Moves.

Making a big screen small, and splitting it

If you don’t believe us that the G Pro 2 borders on being too large, look at LG’s own mini mode feature. Just swipe across the Android buttons at the bottom on the screen, and the entire screen shrinks down to a more manageable size. Cleverly, the screen can be resized and shifted around the screen.

It’s easy to sneer at the irony of making a large-screen display smaller so it’s more usable, but massive screens are here to stay, and this is an easy, sensible solution. Fortunately, you can also use that big screen to run two apps alongside each other. For once, this is very easy to set up, and is accessed by a long press of the Android Back button while an app is open. Then, slide your required apps on to the top or bottom of the screen. We should warn you, it’s easy to get stuck in split screen mode. To get out, exit to the home screen.

One hot new feature for phones this year is the ability for cameras to mimic the Lytro, and refocus shots after they’re taken. LG’s MagicFocus outperformed competitors like Samsung’s Galaxy S5. Basically, the camera takes a bunch of shots in quick succession, each with different depths of focus. Then after you shoot, you can tap on the screen to adjust the focus. It’s not a feature you’ll use much, but it does work.

The 13-megapixel rear shooter on the G Pro 2 didn’t let us down when we went sightseeing in Barcelona. The video recording worked well, too. Like most phones, it still doesn’t handle low light well, and the iPhone 5S camera is still a step ahead in many instances, but LG’s camera holds its own, as does the weaker 2.1-megapixel front camera.

We very much enjoyed using the G Pro 2, and though we’ll likely go back to a smaller-screened phone after the review period is over, it’s a great device. It doesn’t have the S Pen stylus of the Note 3, but stacks up to Samsung’s flagship phone in every other way. Thanks to its KnockOn unlocking and rear power/volume button placement, it’s more comfortable to hold than the Note as well. We still prefer the G Flex if we had to choose a phablet to carry around, though.