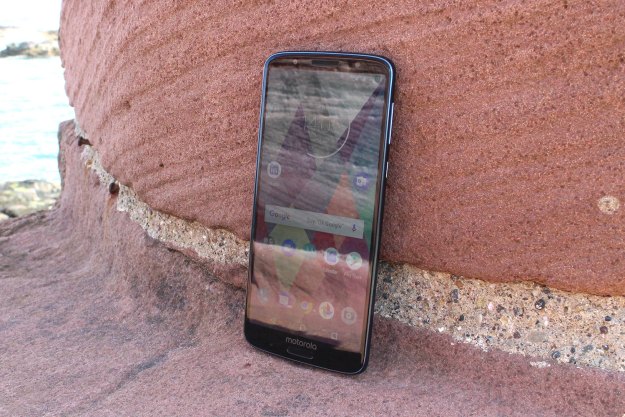 “With a dual-lens camera, attractive design, and tempting price the Moto G6 Plus demands attention.”

The Moto G series has consistently bossed the budget smartphone market since it was first introduced five years ago. A lot has changed since then – not least Motorola passing from Google to Lenovo ownership. Fears that new management might mean a drop in quality seem to have been unfounded as Motorola has continued to turn out a host of great value devices every year. But the competition is improving, making it increasingly tough for Motorola to stay on top.

We’ve been particularly pleased in recent months by devices like the HTC U11 Life, the Honor 7X, and the Nokia 6.1, so we were interested to see if the Moto G6 Plus could match up to or surpass the rest of the field. The Motorola line-up is confusing this year – we’re talking about a lot of different phones, including three G series devices with a lot of similarities. Strangely the U.S. is only being offered the Moto G6 and Moto G6 Play, while the rest of the world is treated to the headlining Moto G6 Plus. Motorola hasn’t given us a reason why. In any event, here’s what Americans are missing.

A budget sheep in wolf’s’ clothing

Looking back at the first few entries in the Moto G series, they managed to offer a decent feature set at a reasonable price, but with chunky plastic bodies they were never going to blend into flagship company. Budget design has really moved on.

The Moto G6 Plus is a big phone, but it looks modern and sleek. The glass front is home to a 5.9-inch display with fairly small bezels top and bottom. There’s a recessed fingerprint sensor below the screen. Flip it over and you’ll find a beautiful curved glass back that slots neatly into the pleasing line of the frame.

The familiar M logo has that signature round camera module above it, which makes this device instantly recognizable as a Motorola. We can’t help feeling that the camera protrudes a bit too much – it even extends beyond the slim, transparent case that Motorola includes in the box.

Whether or not you like the distinctive look, the camera module is the first thing that touches down on every surface when you put your phone down, and it tends to catch on pockets and collect a lot of dust and lint.

The Moto G6 Plus is a big phone, but it looks modern and sleek.

Up top you’ll find the SIM and MicroSD card tray, while there’s a USB Type-C port and a 3.5mm audio jack on the bottom edge. The right-hand side sports the volume rocker with the power button below it.

Our review unit is the Deep Indigo version, which looks great when it catches the light. There is also a Nimbus option, which is gray. Because it’s a glass sandwich, you’re going to have to contend with finger smudges, and it won’t react well to unexpected tumbles onto the sidewalk, but that’s par for the course nowadays.

Motorola does include a transparent case in the box, which is handy, but definitely detracts from the gorgeous finish on the back. Camera module aside, the Moto G6 Plus is a great-looking budget phone.

It doesn’t have an IP rating, but it is water resistant, so you shouldn’t have anything to fear from splashes or rain.

We found it perfectly pleasant to read on and plenty big enough. The only problem we encountered with it was the brightness levels, which doesn’t deal well with sunshine, making it hard to read outdoors.

For a budget device, this display is more than adequate.

Performance doesn’t live up to the specs

While its slightly smaller sibling, the Moto G6, makes do with a Snapdragon 450 processor, the G6 Plus gets upgraded to the Snapdragon 630. It comes with 4GB of RAM and 64GB of storage, or you can upgrade to 6GB of RAM.

It looks good, performs well, and offers some features you simply don’t expect to find in a budget phone.

Performance is not as fast as we hoped it would be. We ran into some sluggishness navigating around and jumping in and out of apps, but nothing too egregious. To be fair, this is something we noticed after switching from a much more powerful flagship. If you’re upgrading from an older phone, it’s probably going to feel fast.

We played PUBG: Mobile without issue, but on the lowest settings. There were no problems with Super Mario Run, or Star Wars Commander. It got warm while playing PUBG: Mobile, just like every other phone does, but it also chewed through the battery life at an alarming rate – more on that later.

The benchmark results are good:

That makes the Moto G6 Plus significantly faster than the Moto G6 which got lower scores across the board. It’s also slightly better than the HTC U11 Life and the Moto X4, but it’s about the same as the Nokia 6.1. You should never rely on benchmarks alone, but it’s fair to say that the Moto G6 Plus is a good performer in its price bracket. We did encounter the odd stutter, but we think that it’s likely something to do with the software.

It runs Android 8.0 Oreo and we expect it to get Android P, which is good, but there’s more on top than in previous Moto phones.

We’ve praised Motorola in the past for sticking close to stock Android and only adding a handful of useful features and apps, so it saddens us to see bloatware creeping in on the G6 Plus. Making Outlook the default email app on an Android phone is annoying and it can’t be uninstalled, just disabled. If people want Outlook they can easily install it for free – don’t force it on them.

We still like Moto Actions, which offers shortcut gesture for turning on the torch and snapping a screenshot, and Moto Key is handy, allowing you to use the fingerprint sensor to log in to some websites. But the Moto app is growing, and it seems determined to collect data and fire useless suggestions at you, which is a trend we’re not so keen on.

One thing that some people will be delighted to find is an FM radio app. You don’t get earphones in the box with the G6 Plus, but if you plug in your own they can act as a receiver for FM radio.

Overall performance is good, but we can’t help feeling it’s not quite as good as it could be with this hardware and we’d prefer a lighter touch on the software front.

Camera is a budget delight

We didn’t have great expectations, but we were pleasantly surprised by the camera. It garnered great results on a sunny day at the coast. The colors are accurate and vibrant, and it captures a decent amount of detail. It also did well with close-ups in the automatic mode, creating a pleasing background blur.

Predictably, noise creeps in quite quickly in low-light conditions, but, on the whole, it performs well for a budget phone.

We found the software a little confusing. There are some extra modes you can choose from, but once you select one you must deselect it to get the menu to come back. Spot Color turns everything except the color you select to black and white, which is fun, but we think the Portrait mode will be the one most people are interested in.

We shot a few different portraits, but the results were mixed. While it produces a strong bokeh effect, blurring the background and keeping the subject sharp, you could argue the effect is a little too strong and it frequently messed up the edges. You might find that you get more pleasing results with the automatic camera settings.

The front-facing 8-megapixel camera takes good selfies and is going to be perfectly adequate for most people.

There are also Slow Motion and Time Lapse modes, which are nice to find on a budget device, though when we tried the Slow Motion mode, the quality was far from great.

You’ll find a 3,200mAh battery in the Moto G6 Plus, which should be enough to see you through a standard day with change. You may even manage two days with light use.

There are some caveats, however. We found that a combination of cranking up the screen brightness and playing games like PUBG: Mobile online saw the battery dip very quickly. That’s to be expected to some extent, but around 50 percent in a single half hour game seems excessive.

We didn’t have great expectations, but we were pleasantly surprised by the camera.

The good news is that the Moto G6 Plus can charge up lightning fast with the TurboPower charger in the box. If the battery is low, it refills very quickly, but charging slows as the battery fills up, which helps protect it and extend its life.

Even though the glass back would allow it, there’s no support for Qi wireless charging – that’s a feature that still hasn’t reached the budget market yet.

We disappointed that the Moto G6 Plus isn’t being offered in the U.S. as we’re confident it would do well. It’s probably because of how close it is to the Moto X4, though we prefer the G6 Plus.

You can return the Moto G6 Plus for a full refund within 14 days if you decide it’s not for you and there’s a standard one-year warranty for faults.

The Moto G6 Plus is an excellent budget smartphone and we’re struggling to point to anything better at this price. It looks good, performs well, and offers some features you simply don’t expect to find in a budget phone.

The top flagships are obviously better, but they’re also three times the price or more. If you could scrape together another 200 British pounds, then you could snag a OnePlus 6 or import a Xiaomi Mi Mix 2S. An extra 80 pounds would be enough for a Nokia 7 Plus.

If you’re in the U.S. and want a Motorola, then you’re going to have to choose between the slightly slower Moto G6 at $250 or the older Moto X4, which has recently dropped to $300. We recommend you try the Nokia 6.1, which costs $270, and has the same processor as the Moto G6 Plus.

We expect it to get a few software updates and it should serve you well for a couple of years, provided you use the case provided or buy one. We can’t see it getting a lot of support beyond Android P and we think improvements in processors and battery life will push you towards an upgrade within two years.

Yes, if you can get it where you live then the Moto G6 Plus is likely to be the best phone you can buy for the money. There’s no doubt that it’s the king of the current G series crop.