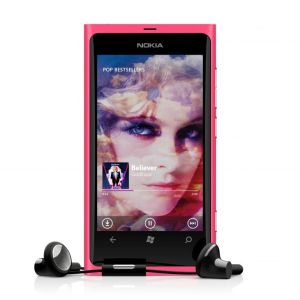 When Nokia unveiled its first two Windows Phone 7.5 handsets, the Lumia 710 and Lumia 800, it showed off an interesting music feature called MixRadio, which allows a user to access pre-made music playlists. At least, that’s all we thought it did. Today, Nokia has revealed that a streaming service called Echo Nest powers MixRadio, meaning it appears to be a lot more robust than we initially believed.

The Lumia 800 will be the first handset to include the MixRadio app, which has a library of more than 15 million songs, a full MP3 store, live concert recommendations, and the ability to download as much as 15 hours of music onto the phone for offline playback. Like Pandora and Genius Playlists on iTunes, MixRadio can also help users make custom music stations based on any song or artist, and it comes preloaded with about 100 prepackaged stations made by the folks at Echo Nest.

“We’re obsessed with understanding the entire world of music so we can enrich consumers’ lives with a more meaningful listening experience,” said Jim Lucchese, CEO of The Echo Nest. “Nokia’s MixRadio unites our music intelligence platform with a beautiful device, delivering the most personalized global music service the world has ever seen. We are thrilled to be helping Nokia give millions of music fans this intelligent, personalized digital music experience.”

While we in the U.S. are still waiting on the Lumia 800, and take music streaming services for granted, Nokia’s MixRadio will be the first legitimate music streaming option available in some countries, reps tell us. The app will be available in about 50 countries by the end of 2012, showing the reach of Nokia. We look forward to testing it out when Nokia handsets finally make their way to the U.S.—probably at CES in January. Stay tuned.

How to make and edit playlists in Spotify

How to add your music to an iPhone, iPad, or iPod touch