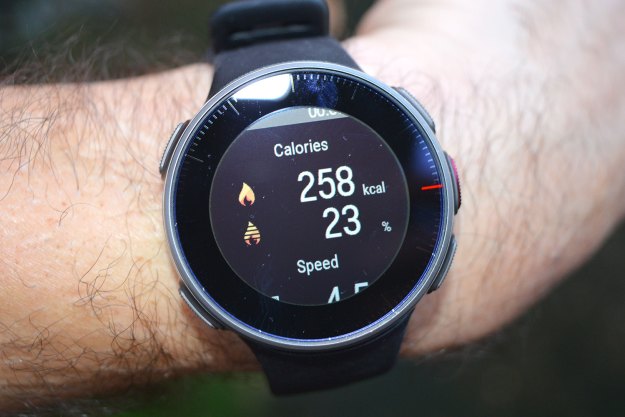 “The Polar Vantage V offers incredible fitness tracking, and has a special focus on runners.”

Polar is a member of the fitness tracker old guard; it’s a name recognizable to many in the fitness world. But it hasn’t really broken into the new market, where increasingly stylish fitness trackers and ever-more capable smartwatches dominate.

The Vantage V represents a clear turning point in Polar’s visual design. The boxy style of the Polar M430 and V800 have been thrown out in favor of a sleeker, more traditional watch style. It’s a huge change for a Polar, and a very welcome one. Unlike the Polar M430 — which would often attract negative comments — the Vantage V is a fitness tracker you can happily wear at any time.

It’s on the large side, measuring 46mm across and 13mm thick, but at 66 grams it’s not heavy. The silicone strap is more comfortable than older models, and it’s easy to forget it’s sitting on our wrist. We also haven’t felt the need to loosen it due to discomfort either.

The Vantage V is a fitness tracker you can happily wear at any time.

The Vantage V has a 1.2-inch touchscreen running a 240 x 240 resolution. The screen’s mediocre, because it’s dim with washed out colors, and has an unresponsive touch function. It’s certainly not the equal of something like the Galaxy Watch or the Apple Watch Series 4. Performance overall is so-so, with some lag scrolling between screens. However, during exercises and other activities, performance is top-notch.

Sounds terrible? It’s not that bad. The unreliable touchscreen doesn’t matter so much as you can use the buttons surrounding the display instead, and because the watch doesn’t have smart features, you don’t need to look at the screen so often. There is a backlight that compensates for the dim screen, and unless you’re constantly selecting different sports to track, the slowness doesn’t get annoying.

The Polar Vantage V is very much a watch for the fitness-obsessed, and fitness tracking is where it really shines. Though many of the new features benefit runners the most, the Vantage V has support for almost every activity you can think of — there are 130 different sport profiles included.

The Vantage V packs a total of nine optical heart rate sensors, combined with four skin contact sensors. The Vantage V uses a combination of green and red LEDs to increase optical sensor accuracy, and the skin sensors also increase the accuracy of tracking while swimming. Using the Vantage V in our daily life and during exercises, the heart rate monitor proved accurate when compared to manual comparisons and against Polar’s H10 chest strap.

The Vantage V connects to your phone by Bluetooth — but it’s built to work without it. It comes with independent GPS & GLONASS, and a barometer, so you’ll be able to leave the phone at home during workouts. The GPS works well and managed to keep track after sharp turns and sudden changes of direction.

The biggest addition is the inclusion of running power as a metric. Running power is a measurement of how much power you’re outputting from your run, and it’s used by runners to help pace themselves. Other Polar devices have been able to connect to the Stryd power meter to share the data in real time, but the Vantage V is the first wrist-based device to measure the metric by itself.

The screen’s mediocre due to being dim, with washed out colors, and an unresponsive touch function.

There’s also a new Training Mode Pro feature. It monitors the stress on your cardio system and muscles, and recommends taking a break if you’re going too hard, or stepping up your training if you’ve been taking it easy. It measures your training effort by putting it into one of four categories: Overreaching, Productive, Maintaining, and Detraining. Falling into Overreaching means running the risk of injury from overwork, while Detraining means you’re losing progress from a lack of training. You’ll want to keep within Productive and Maintaining, and being able to quickly see your status from your wrist makes planning ahead a cinch, and not much motivates better than being told you’re getting weaker.

The new Recovery Pro feature takes this analysis even further with advanced cardio recovery data. The Vantage V can also use Polar’s H10 chest strap to take an orthostatic test of your system, and gauge how well your cardio system is recovering since your last session.

You won’t find any smart features in the Vantage V. Unlike competitors like the Garmin Forerunner 645, there’s no support for music, and no notifications from your phone. Some of this will change in the future, and Polar has promised smart notifications and route guidance updates will arrive in early 2019, and more updates will come over time. Good news.

Like previous Polar fitness trackers, the Vantage V is supported by the companion app, Polar Flow. While the Vantage V highlights stats from recent exercises, you need the app for a real deep dive. It’s here you’ll be able to set up sport profiles, and track your sleep patterns.

There’s plenty here to please stat-heads. You’ll find deep analysis of all your past training sessions, along with an exhaustive breakdown of how you spend your day when you’re not training — including how much of your day you’ve spent sat down. Spend too much time on your rear and the app will award you an Inactivity stamp for your shame.

The Vantage V has support for almost every activity you can think of, with 130 different sport profiles included.

However, outside of the Training Mode Pro we highlighted earlier, the app doesn’t do much to encourage you to keep moving and training. Polar Flow’s interface is basic, and there’s nothing like Google Fit’s concentric rings to encourage further movement or training. If you’re not training, there’s little reason to open the app, making it a simple repository for the Vantage V’s data.

We’re not done with platforms either. In addition to the watch and the app, annoyingly you still need to access the Polar Flow website to set up Polar’s running programs — though Polar has moved recovery stats to the watch, which is a step in the right direction. Those not fully invested in improving fitness may find all this too much, and prefer the simplicity of a basic fitness band or smartwatch.

There’s a long-lasting 320mAh battery inside the Vantage V. We fully charged the device on a Thursday, strapped it on and didn’t need to charge it again until Saturday — and we would have likely gotten a few more days out of it with the 18 percent battery remaining. Better still, it recharged fully in just over an hour, although you’ll have to be sure not to lose the proprietary charger that clips under the optical heart rate sensors.

If you exercise more than we did (roughly three times a week) then you can expect your battery life to suffer more as a result — but this still shouldn’t be a device you’ll need to charge more than once every couple of days. Polar claims that the device has a training battery life of 40 hours with GPS and heart rate monitoring active. We’d expect to get this, based on our experience.

The Polar Vantage V is classed as Polar’s new top-of-the-range professional-level fitness tracker, so it comes with a hefty price. It’ll set you back $500 without the H10 chest strap, and $550 with it. Polar offers a two-year warranty for the Polar Vantage V, which covers manufacturer defects.

The Polar Vantage V offers powerful fitness tracking for a huge catalogue of activities, and the inclusion of the running power metric and recovery status will likely tempt many serious athletes. Casual athletes may find the high price tag and lack of everyday smartwatch features off-putting.

The Polar Vantage V is intended for serious athletes, and that focus is obvious in its features and — most importantly — its price. Polar has thought of this, and for those who balk at paying so much should look at the Polar Vantage M, a cheaper version of the Vantage V which shares many of the same features. It has a similar design, and comes with the bonus of having a standard 22mm strap attachment, so you can slap on a number of third-party straps.

However, you sacrifice the touchscreen — no bad thing — and some of the Vantage V’s more advanced features like the Recovery Pro feature, built-in running power, and the orthostatic test. The battery is slightly smaller — rated for 30 hours — and it won’t get some of the features Polar promises the Vantage V will receive later — like route guidance.

However, it is over $200 less than the Vantage V at $280, and packs much of the same into a lighter body — making it a great choice for anyone looking to spend a little less money.

Outside of the Polar range there are many alternatives worth investigating. People who love to listen to music on their fitness tracker also won’t get much from the Vantage V, and should probably check out something like the Garmin Forerunner 645 instead. Style lovers can’t get much better than the Fitbit Versa’s excellent fitness tracking capabilities, and iPhone users should always consider the Apple Watch Series 4 first and foremost. Finally, the Garmin Fenix 5X is another expensive high-end outdoors watch — but it lacks the Vantage V’s focus on running.

Polar has software updates planned well into 2019, so owners can expect to keep receiving improvements and new features for at least a year. Upcoming features include more Strava integration, smartwatch-style notifications, and a fitness test.

The Vantage V isn’t a rugged GPS watch, but you can take it into the pool as it’s completely waterproof with a WR30 rating. It also feels durable enough to take a few blows, thanks to the Gorilla Glass protecting the screen. We’ve accidentally hit it into walls and railings, and it’s still pristine. Two to three years of solid performance from the Polar Vantage V shouldn’t be unexpected.

Yes, dedicated runners will love the running power metric and the deep insight into recovery and training status. For casual athletes, look elsewhere.

Topics
Video-editing app LumaFusion to get a Galaxy Tab S8 launch
Samsung Galaxy S23: release date, specs, price, rumors, and news
This is the OnePlus Pad — the OnePlus tablet we’ve waited years for
The best QR code scanning apps for iPhone and Android in 2023
Trading in your iPhone with Apple? You’ll get less than yesterday
The best iPhone apps in 2023: 50+ apps you need to download now
The iPhone 15 Pro’s rumored new design is one I can’t wait for
The best folding phones in 2023: our 6 favorite foldables right now
You can finally take ECGs and track AFib on a Garmin smartwatch
I bought a $50 Apple Watch Ultra clone, and it blew me away
Best cheap phones in 2023: our 5 favorite ones for tight budgets
How to get Apple’s Black History Month 2023 wallpapers for your iPhone and Apple Watch
Yes, we really are completely spoiling the OnePlus 11 and Buds Pro 2 launch