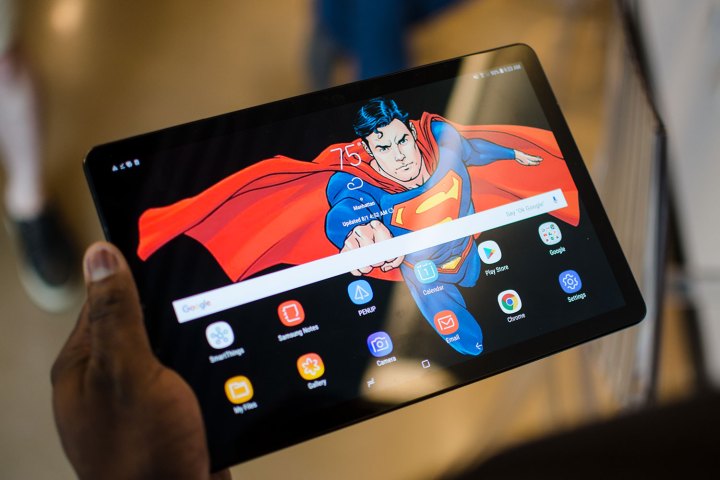 For the past few years, the iPad Pro has reigned as the go-to tablet for professionals and creatives. Samsung has been trying to get in on the action, but the problem lies with Android, which offers few tablet-optimized apps. The Galaxy Tab S4 is looking to shake up the Android tablet space, thanks to Samsung’s Android desktop mode, which catapults the Tab S4 into a productivity machine.

The entire point of a pro tablet is for it to perform extremely well, right? Well, both the Samsung Galaxy Tab S4 and iPad Pro should be able to handle just about any task you can imagine. In terms of processor power alone, the Galaxy Tab S4 has a powerful Qualcomm Snapdragon 835 processor, while the iPad Pro is packing Apple’s A10X Fusion chip. Both have 4GB of RAM, which is plenty for multitasking. Apple’s processor does edge out a win here because it’s more powerful than the Snapdragon 835.

When it comes to battery life, things are a bit more tricky. Samsung claims the new Galaxy Tab S4 should last through 16 hours of video playback on a single charge, while Apple offers a more conservative 10 hour estimate of “surfing the web on Wi‐Fi, watching video, or listening to music.” The Tab S4 has a 7,300mAh battery, but the iPad Pro packs an 8,134mAh battery capacity. We’ll need to test Samsung’s claim, but either way, both of these tablets should easily get you through a day of use. If you do find yourself running low, Samsung’s newest tablet has a fast-charging adapter in the box; if you want a quick charge on the iPad Pro, you’ll need to buy a separate adapter.

Overall, we’re calling this round for the iPad Pro. It’s performance outmatches the Samsung Galaxy Tab S4, and it features a battery that will definitely get you through a full day.

Both the Samsung Galaxy Tab S4 and the iPad are gorgeous tablets, so personal preference will win out here. We think the front of the Tab S4 looks more contemporary, but prefer the rear design of the iPad Pro.

Durability-wise, the Galaxy Tab S4 loses points for its all-glass body (Gorilla Glass 3). Apple only has glass over the screen and aluminum on the back, which means you won’t have to worry about the back shattering after a drop. While Samsung’s glass back is nice, it doesn’t really serve a purpose other than design: There’s no wireless charging on the tablet.

Design is mostly a draw here, but durability lands the iPad Pro the win.

Samsung managed to pack an absolutely gorgeous Super AMOLED display into its Galaxy Tab S4, and its precisely what you’d expect: Colors are vivid, blacks are inky, and the viewing angles are excellent. The iPad Pro, on the other hand, uses a laminated LCD display with a 120Hz refresh rate and color-adjusting True Tone technology. The high refresh rate makes scrolling through apps feel incredibly smooth, and it’s a technology not available on any other tablet on the market.

This round goes to the iPad Pro. While the colors may be a bit more vivid on the Samsung Galaxy Tab S4 — and the screen a little sharper — the iPad Pro’s 120Hz refresh rate simply makes the tablet even more of a joy to use.

While the iPad Pro camera may be better here since it’s more or less the iPhone 7’s camera system, we don’t put a ton of stock into tablet cameras since they’re not used in the same way you’d use the camera on your smartphone. You’ll find a satisfactory camera experience here for both devices, though we’ll be testing the Tab S4 in more detail for the review.

Last year, this comparison would have basically come down to an iOS vs. Android comparison, but things are a little more exciting this year. Samsung is bringing its DeX mode to the Galaxy Tab S4. DeX mode creates a desktop-like Android experience right on the tablet. It works great with Samsung’s suite of apps and third-party support is growing. The 10.5-inch iPad Pro, on the other hand, still relies solely on iOS, which can be a challenge for productivity. The iPad does have a slew of multitasking features, such as split-screen and drag and drop, but DeX seems to offer a more comfortable laptop-like experience.

We think DeX mode has a lot of potential, but Samsung is not as diligent about software and security updates as Apple. You can be sure to receive Android P and Android Q, but don’t expect those updates to come in a timely manner. If that’s important to you, stick with the iPad Pro — it’s what makes this section a tie.

Looking for special features you won’t find on other tablets? Well, both the Samsung Galaxy Tab S4 and iPad Pro have one major special feature: The S Pen and Apple Pencil, respectively. Both styluses allow you to draw, sign documents, and take notes. On Samsung’s newly updated S Pen, you’ll even find a button that will open a list of frequently used apps for quick access.

While we think the Apple Pencil is a much better tool for creators, it costs $100, and you need to charge it. The S Pen is included with your Tab S4 purchase, and it doesn’t need charging.

A great tablet has to have great sound, right? Well, both the Samsung Tab S4 and iPad Pro offer a quad-speaker setup that is sure to please the average listener. On the Tab S4, you’ll find speakers tuned by AKG with Dolby Atmos Sound, and while that sounds good, there are a few problems. First off, they’re not as loud as we’d like: They’ll probably be fine for a movie, but you’re definitely not going to want to play music on them during a party. The bigger problem is they simply don’t work well when the tablet is attached to Samsung’s Book Cover Keyboard. The sound is muffled, so you’ll need to take it off or use a different case.

The iPad Pro, on the other hand, also has a quad speaker setup that isn’t affected by a cover. The audio sounds great, and it gets plenty loud. The iPad Pro takes the win.

The Samsung Galaxy Tab S4 sells for $650 for the 64GB model and $750 for the 256GB model. An LTE version will be available on Verizon but we haven’t received pricing for it just yet. Both models will be available on August 10. Support for other carriers such as AT&T, Sprint, and US Cellular will arrive later this year. It’s an extra $150 for the Book Cover Keyboard.

The iPad Pro takes the crown. From its slightly more durable design to its superior processing power, the iPad Pro is our first choice when it comes to a pro tablet. That’s not to say the Samsung Tab S4 is a slouch. The new DeX mode shows a lot of potential, and if it works well enough with third-party apps, it just may be an excellent laptop replacement. We’ll continue testing it for our full review. However, if one of them caught your eye and want to try for yourself, you can always leverage the Black Friday tablet deals and their low prices.

Topics
Video-editing app LumaFusion to get a Galaxy Tab S8 launch
The best tablets for 2022: Which should you buy?
Which iPad tablets are compatible with iPadOS 16?
The best tablets for kids in 2022: Fire HD, iPads, and more
The best Bluetooth trackers for 2022: AirTag alternatives
Now’s a great time to buy the Samsung Galaxy S22 Ultra
The best Cyber Monday Apple Watch deals for 2022
The best Cyber Monday AirPods deals for 2022
Fitbit Cyber Monday Deals: Save on Sense 2, Charge 5, and Versa 2
5 Apple gadgets you really should avoid this holiday season
You won’t believe how cheap this iPad is, thanks to Cyber Monday
How 2023 could bring Google’s best and most ambitious Pixel lineup yet
You can buy an Apple Watch for $149 for Cyber Monday (seriously)